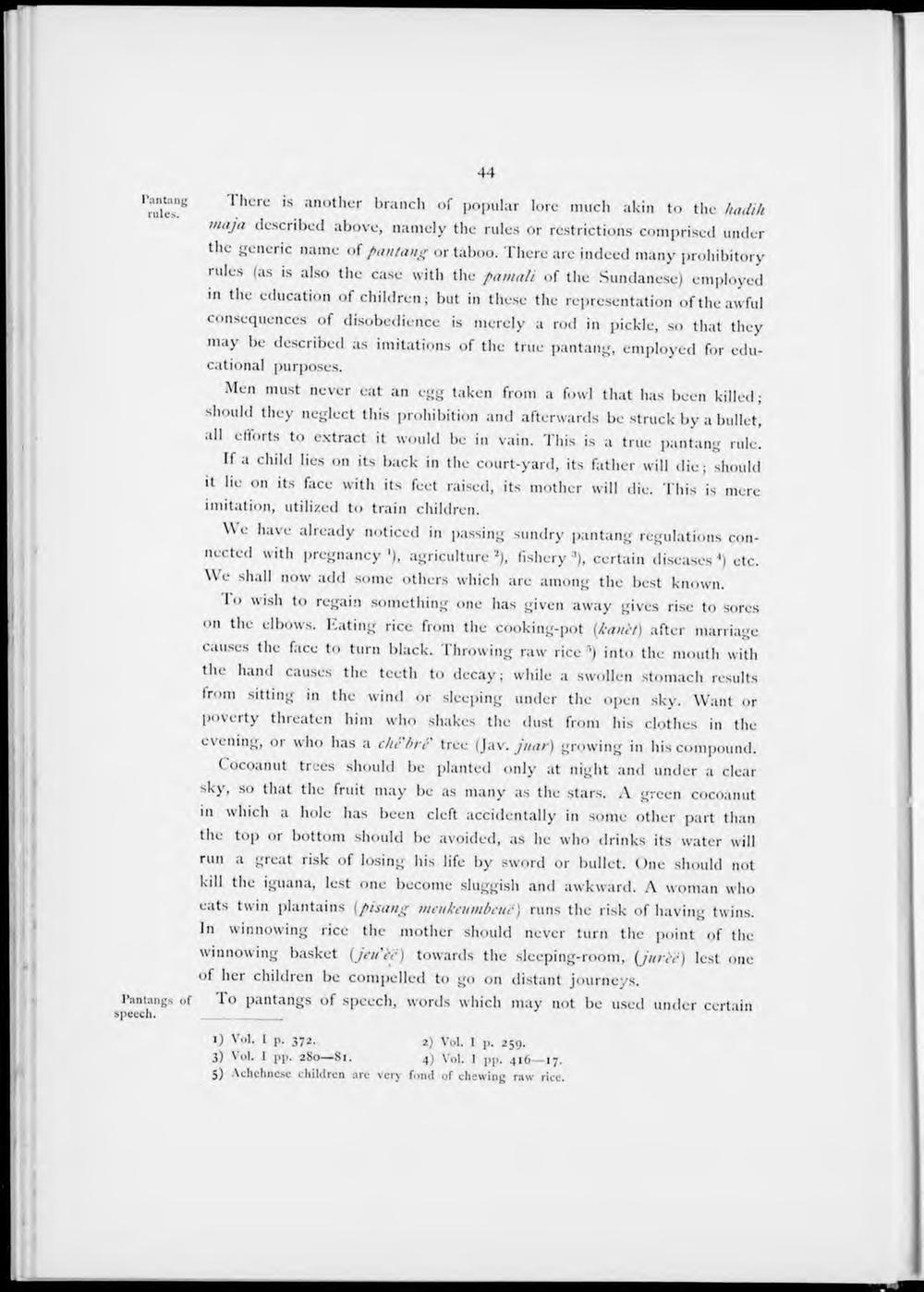 ' rul el"B ' 'lcrc 's another branch of popular lore much akin to the hadih maja described above, namcly the rules or rcstrictions comprised under the generic name of pantang or taboo. There are indeed rnany prohibitory 1 ules (as is also the case with the pamali of the Sundanese) employed in the education ofchildren; but in these the representation of the awful consequences of disobedience is merely a rod in pielde, so that they may be described as imitations of the truc pantang, employed for cducational purposes.

Men must never eat an cgg taken from a fowl that lias been killed; should they neglcct this prohibition and aftcrwards be struck by a hullet, all efforts to extract it would be in vain. This is a truc pantang rule.

If a child lies on its back in the court-yard, its father will die; should it lic on its face with its feet raised, its mother will die. This is mere imitation, utilized to train children.

\\ c have already noticed in passing sundry pantang regulations connected with pregnancy '), agriculture 2), fishery certain diseases 4) etc. \\ e shall now add some others which are among the best known.

lo wish to regain something one lias given away gives rise to sores <>n the elbows. hating rice from the cooking-pot (kautt) after marriage causes the face to turn black. Throwing raw rice "') into the mouth with the hand causes the teeth to decay; while a swollen stomach results from sitting in the wind or sleeping under the open sky. Want or poverty threaten liini who shakes the dust from his clothes in the evening, or who lias a cliebrè tree (Jav. jitar) growing in his compound.

Cocoanut trees should be plantcd only at night and under a clear sky, so that the fruit may be as many as the stars. A green cocoanut in which a hole lias been cleft accidentally in some otlier part than the top or bottom should be avoided, as lie who drinks its water will run a great risk of losing his life by sword or bullet. One should not ki'1 the iguana, lest one become sluggish and awkward. A woman who eats tuin plantains (pisang meukeumbeuc) runs the risk of havitig twins. In winnowing rice the mother should never turn the point of the winnowing basket (jeuèë) towards the sleeping-room, (jurcë) lest one of lier children be compelled to go on distant journeys.

Pantangs of lo pantangs of speech, words which may not be used under certain speech.