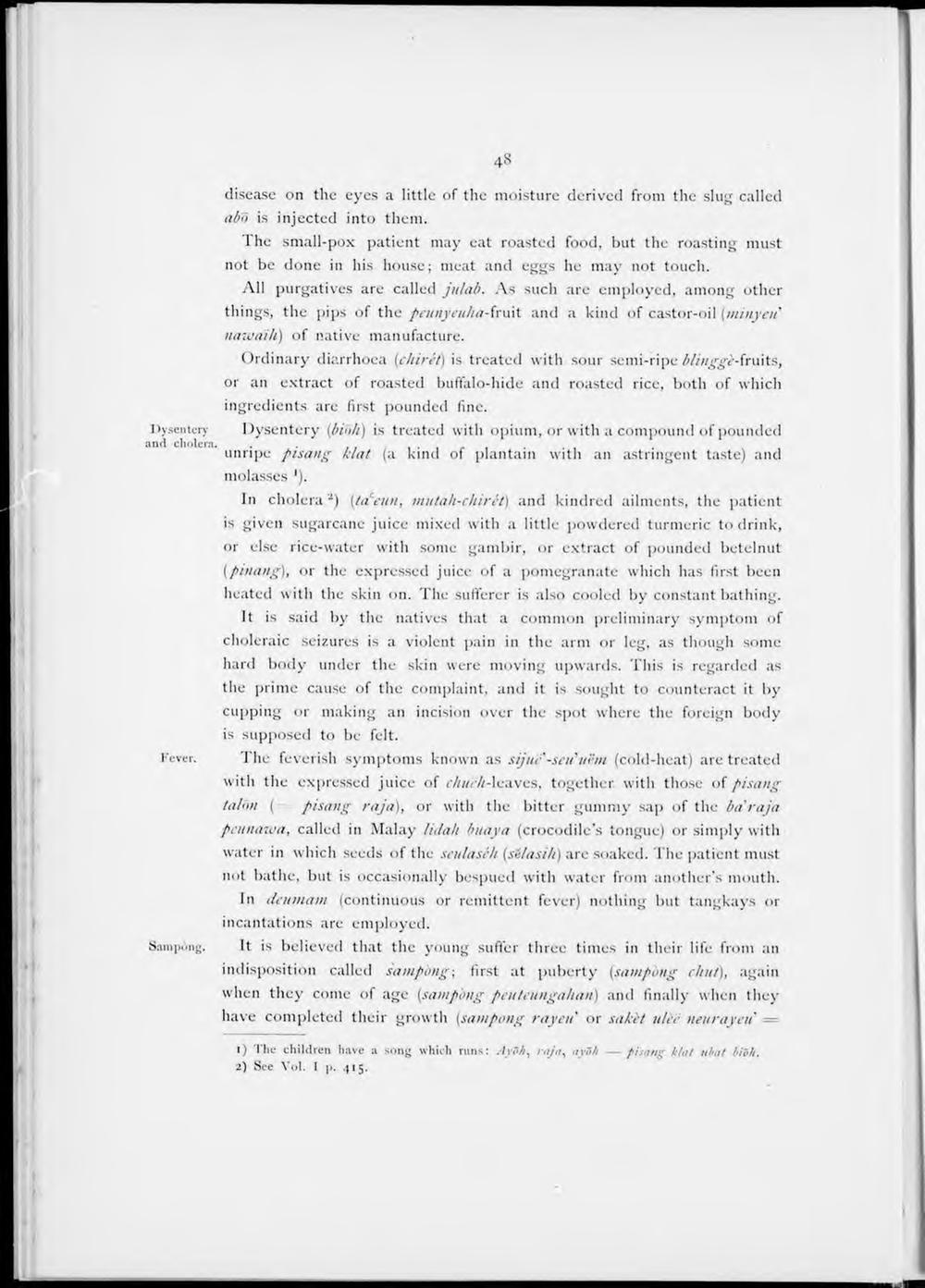 disease on the eyes a littlc of the moisture derived from the slug called abd is injected into them.

The small-pox patiënt may eat roasted food, but the roasting must not be done in his house; meat and eggs he may not touch.

All purgatives are called julab. As such are employed, among other things, the pips of the pcunyeuha-fruit and a kind of castor-oil (minyeu" nawai/i) of native manufacture.

Ordinary diarrhoea (chirct) is treated with sour semi-ripe blinggè-(ruits, or an extract of roasted buffalo-hide and roasted rice, both of which ingredients are first pounded fine.

Dysentevy Dysentery (biöh) is treated with opium, or with a compound of pounded

unripe pisang klat (a kind of plantam with an astringent taste) and molasses ').

In cholera 2) (tafeun, mutah-chirét) and kindred ailments, the patiënt is given sugarcane juice mixed with a little powdered turmeric to drink, or else rice-water with somc gambir, or extract of pounded betelnut (pinang), or the expressed juice of a pomegranate which lias first been heated with the skin on. The sufferer is also cooled by constant bathing.

It is said by the natives that a common preliminary symptom of clioleraic seizures is a violent pain in the arm or leg, as though some hard body under the skin were moving upwards. This is regarded as the prime cause of the complaint, and it is sought to counteract it by cupping or making an incision over the spot vvhere the foreign body is supposed to be feit.

Fe ver. The feverish symptoms known as sijue -seii'uèm (cold-heat) are treated with the expressed juice of clinch-leaves, together. with those of pisang talon ( pisang raja), or with the bitter gummy sap of the ba raja pennawa, called in Malay lidah buaya (crocodile's tongue) or simply with water in which seeds of the seulaséh (se/asih) are soaked. The patiënt must not bathe, but is occasionally bespued with water from another's mouth.

In deurnam (continuous or remittent fever) nothing but tangkays or incantations are employed.

Sampong. It is believed that the young suffer three times in their life from an indisposition called sampong; first at puberty (sampong chnt), again

| wlien they come of age (sampong peutcungahan) and finally when they