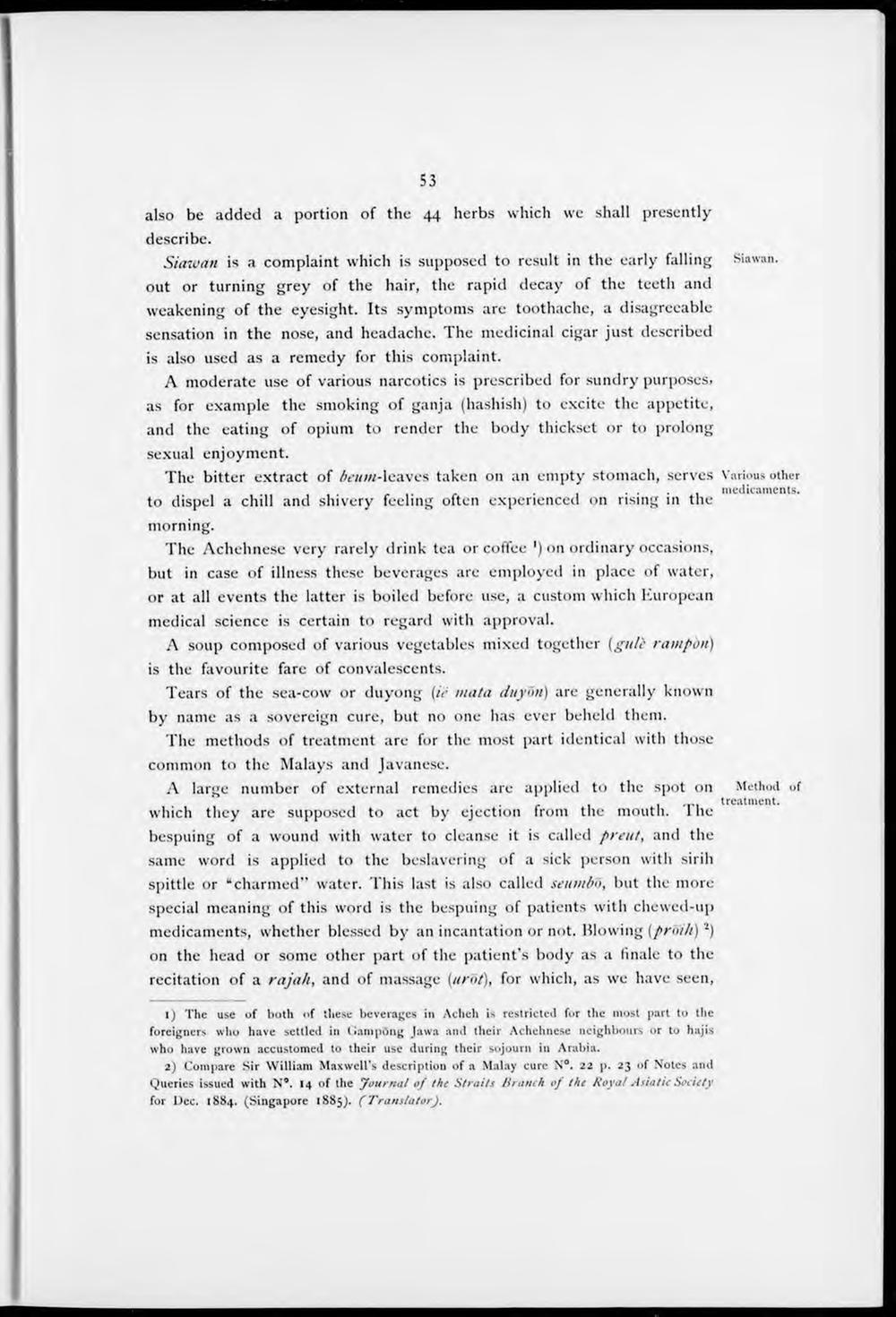 also be added a portion of the 44 herbs which we shall presently describe.

Siawan is a complaint which is supposed to result in the early falling Siawan.

out or turning grey of the hair, the rapid decay of the teeth and weakening of the eyesight. lts symptoms are toothache, a disagreeable sensation in the nose, and headache. The medicinal cigar just described is also used as a remedy for this complaint.

A moderate use of various narcotics is prescribed for sundry purposes,

as for example the smoking of ganja (hashish) to excite the appctite,

and the eating of opium to render the body thickset or to prolong sexual enjoyment.

The bitter extract of beum-leaves taken on an empty stomach, serves Various othcr

but in case of illness these beverages are employed in place of water,

or at all events the latter is boiled before use, a custom which European medical science is certain to regard with approval.

A soup composed of various vegetables mixed together (gulè rai/ipön)

is the favourite fare of convalescents.

Tears of the sea-cow or duyong (n; ma/a duyïïn) are generally known by name as a sovereign cure, but no one lias ever beheld them.

The methods of treatment are for the most part identical with those common to the Malays and Javanese.

which tliey are supposed to act by ejection from the mouth. 1 he bespuing of a wound with water to cleanse it is called prent, and the same word is applied to the beslavering of a sick person with sirih spittle or "charmed" water. This last is also called seumbö, but the more special meaning of this word is the bespuing of patients with chewed-up medicaments, whether blessed by an incantation or not. Blowing (prói/i)2)

on the head or some other part of the patient's body as a finale to the recitation of a rajah, and of massage (uröt), for which, as we have seen,

1) The use of both of tliese beverages in Acheh is restricted for the most part to the foreigners who have settled in Gampöng Jawa and their Achehnese neighbours or to hajis who have grown accustomed to their use during their sojourn in Arabia.