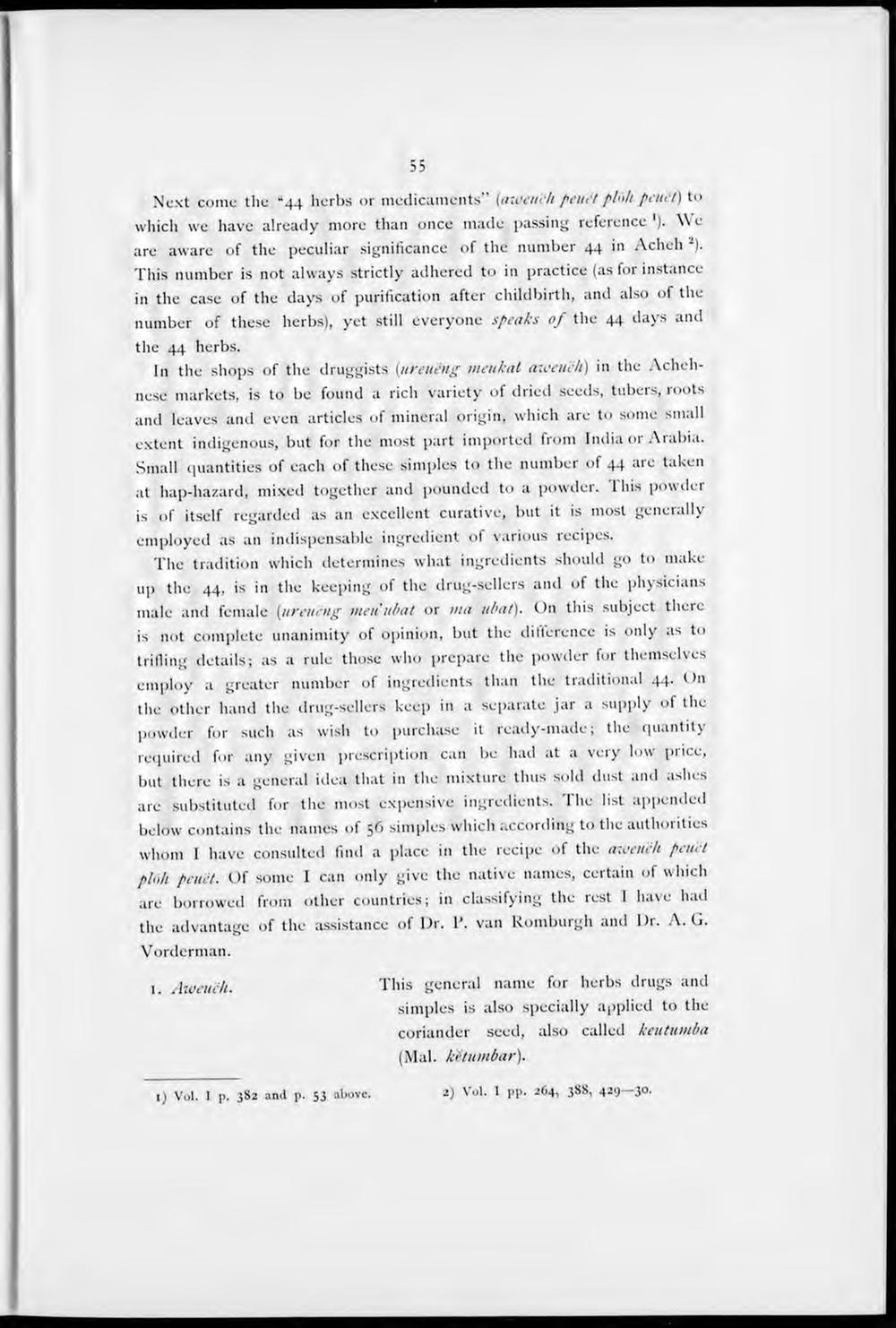 Next come the "44 lierbs or mcdicaments" (aweuch pc int ploh pc liet) to which we have already more tlian once made passing reference '). We are aware of the peculiar significance of the number 44 in Acheh 2). Tliis number is not always strictly adhered to in practice (as for instance in the case of the days of purification after childbirth, and also of the number of these lierbs), yet still everyone speaks of the 44 days and the 44 lierbs.

In the shops of the druggists (tireuëng meukat aweuch) in the Achehnese markets, is to be found a ricli variety of dried seeds, tnbers, roots and leaves and even articles of mineral origin, which are to some small extent indigenous, but for the most part imported from India or Arabia. Small quantities of each of these simples to the number of 44 "*re taken at hap-hazard, mixed together and pounded to a powder. This powder is of itself regarded as an excellent curative, but it is most generally employed as an indispensable ingredient of various recipes.

The tradition which determines wliat ingredients should go to make up the 44, is in the keeping of the drug-sellers and of the physicians male and female (ureucng meuubat or via ubat). On this subject tliere is not complete unanimity of opinion, but the diflference is only as to trilling details; as a rule those who prepare the powder for themselves employ a greater number of ingredients than the traditional 44- 011 the otlier hand the drug-sellers keep in a separate jar a supply of the powder for such as wish to purchase it rcady-made; the quantity required for any given prescription can be had at a very low price, but there is a general idea tliat in the mixture thus sold dust and aslies are substituted for the most expensive ingredients. The list appended below contains the names of 56 simples which according to the authorities whom I have consulted find a place in the recipe of the aweuéh peuët plok peuêt. Of some I can only give the native names, certain of which are borrowed from otlier countries; in classifying the rest I have had the advantage of the assistance of Dr. 1'. van Romburgh and l)r. A. G. Vorderman.