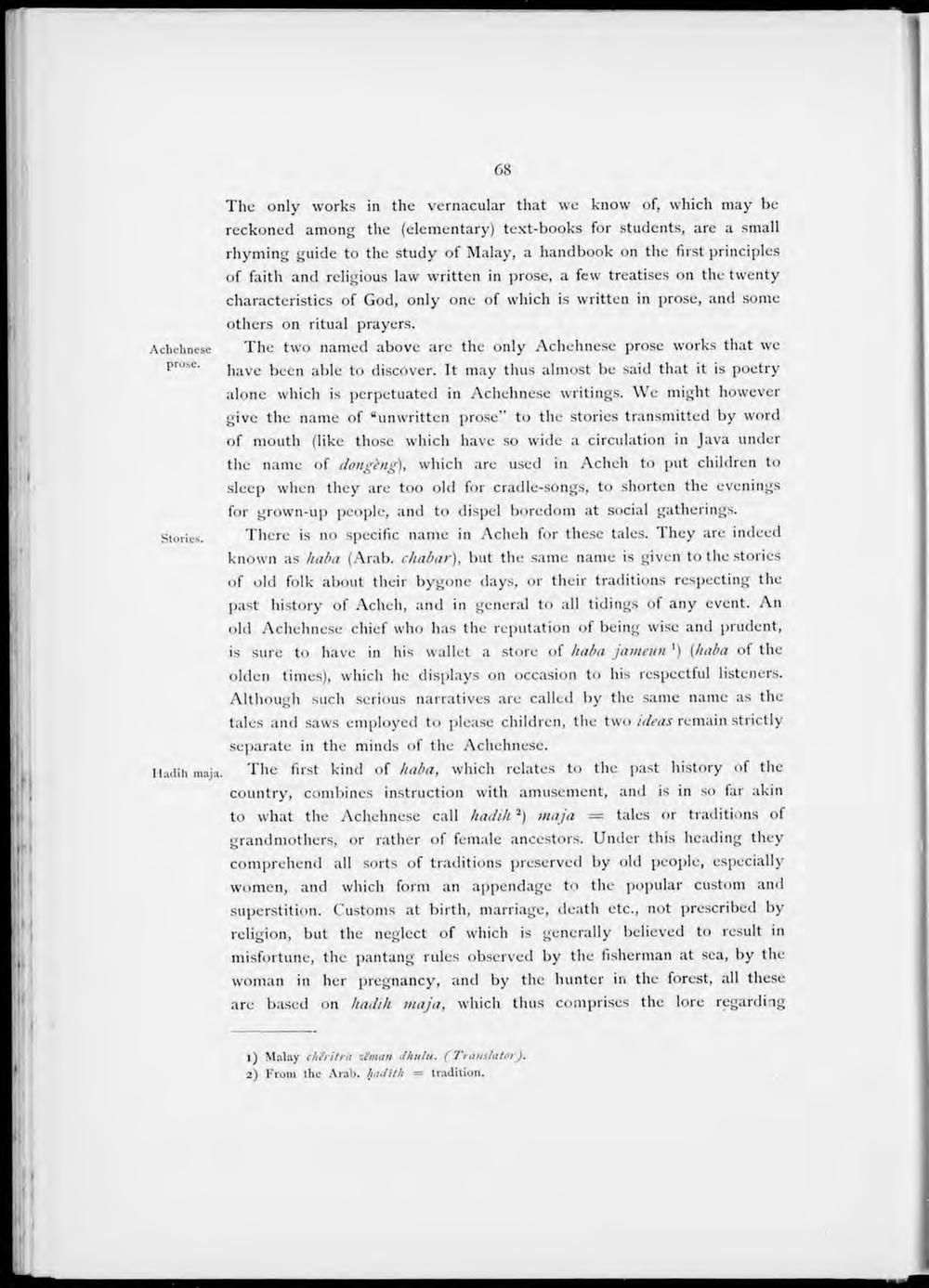 The only works in the vernacular that we know of, which may be reckoned among the (elementary) text-books for students, are a small rhyming guide to the study of Malay, a handbook on the first principles of faith and religious law written in prose, a few treatises on the twenty characteristics of God, only one of which is written in prose, and some others on ritual prayers.

Achehnese The two named above are the only Achehnese prose works that we prose" have been able to discover. It may thus al most be said that it is poetry alone which is perpetuated in Achehnese writings. We might hovvever give the name of "unwritten prose" to the stories transmitted by word of mouth (like those which have so wide a circulation in Java under the name of donging), which are used in Acheh to put children to sleep when they are too old for cradle-songs, to shorten the evenings for grown-up people, and to dispel boredom at social gatherings.

Stories. There is 110 specific name in Acheh for these tales. 1 hey are indeed known as haba (Arab. ckabar), but the satne name is given to the stories of old folk about their bygone days, or their traditions respecting the past history of Acheh, and in general to all tidings of any event. An old Achehnese chief who lias the reputation of being wise and prudent, is sure to have in his wallet a store of haba jameun ') (haba of the olden times), which he displays 011 occasion to his respectful listeners. Although such serious narratives are callcd by the same name as the tales and saws employed to please children, the two ideas remain strictly separate in the minds of the Achehnese.

Hadih maja. The first kind of haba, which relates to the past history of the country, combines instruction with amusement, and is in so far akin to what the Achehnese call hadih2) maja — tales or traditions of grandmothers, or rather of female ancestors. Under this heading they comprehend all sorts of traditions preserved by old people, especially women, and which form an appendage to the popular custom and superstition. Customs at birth, marriage, death etc., not prescribed by religion, but the neglect of which is generally believed to result in misfortune, the pantang rules observed by the fisherman at sea, by the woman in her pregnancy, and by the hunter in the forest, all these are based on hadih maja, which thus comprises the lore regarding

2) From the Arab. hadith = tradition.