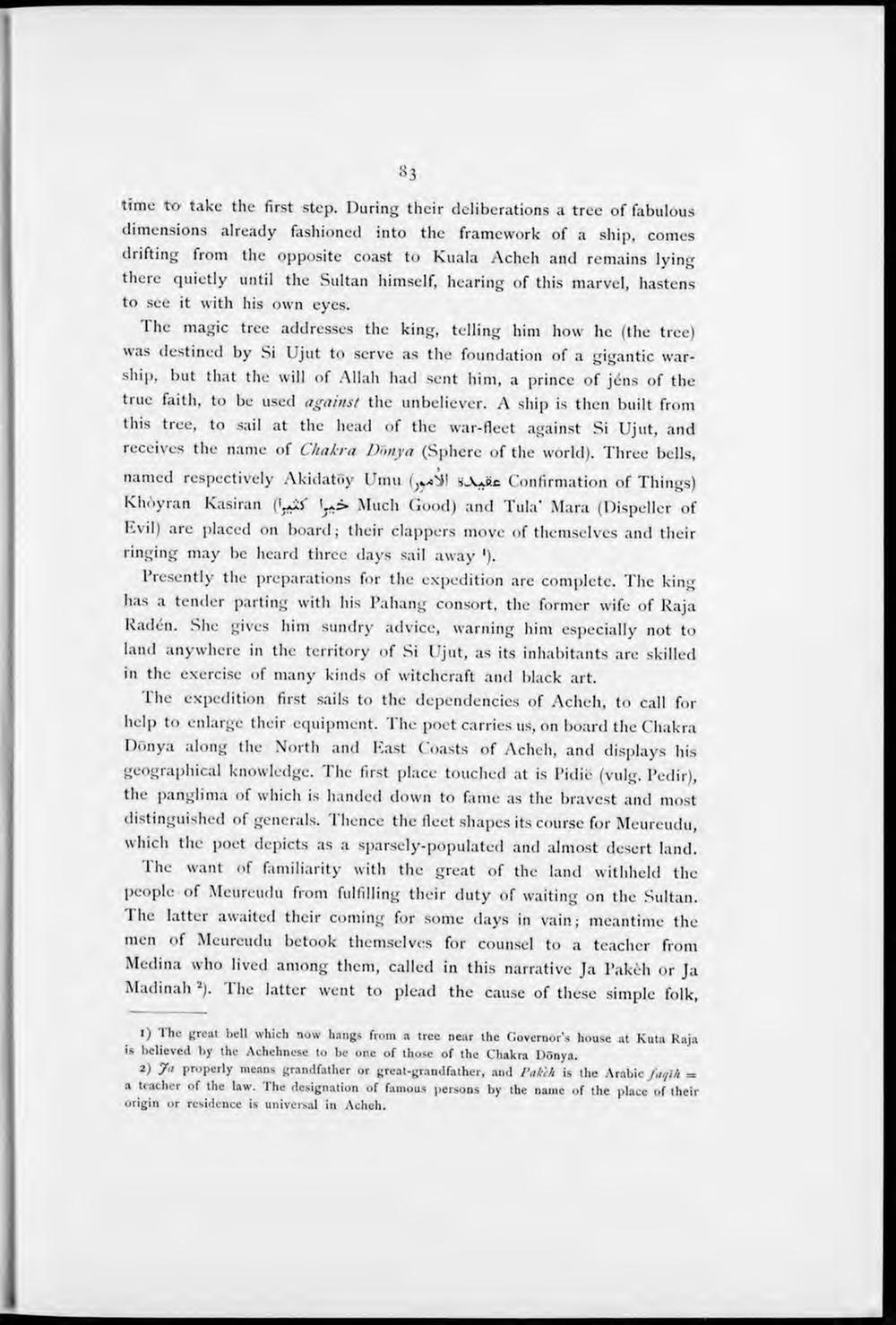 time to take the first step. During their deliberations a tree of fabulous dimensions already fashioned into the framework of a ship, comes drifting from the opposite coast to Kuala Acheh and remains lying there quietly until the Sultan himself, hearing of this marvel, hastens to see it with his own eyes.

I he magie tree addresses the king, telling him hovv he (the tree) was destined by Si Ujut to serve as the foundation of a gigantic warsliip, but that the will of Allah had sent him, a prince of jéns of the truc faith, to be used against the unbeliever. A ship is then built from this tree, to sail at the head of the war-fleet against Si Ujut, and receives the name of Chakra Dönya (Sphere of the world). Three bells, named respectively Akidatöy Umu SA^ac Confirmation of Things)

F.vil) are placed on board; their dappers move of themselves and their ringing may be heard three days sail away ').

Presently the preparations for the expedition are complete. The king has a tender parting with his Pahang consort, the former wife of Raja Radén. She gives him sundry advice, warning him especially not to land anywhere in the territory of Si Ujut, as its inhabitants are skilied in the exercisc of many kinds of witchcraft and black art.

The expedition first sails to the dependencies of Acheh, to call for help to enlarge their equipment. The poet carries us, on board the Chakra Dönya along the North and Kast Coasts of Acheh, and displays his geographical knowledge. The first place touched at is Pidië (vuig. 1'edir), the panglima of which is handed down to fame as the bravest and most distinguished of generals. Thence the fleet shapes its course for Meureudu, which the poet depicts as a sparsely-populated and almost desert land.

The want of familiarity with the great of the land withheld the people of Meureudu from fulfilling their duty of waiting on the Sultan. The latter awaited their coming for some days in vain; meantime the men of Meureudu bctook themselves for counsel to a teacher from Medina who lived among them, called in this narrative Ja Pakèh or Ja Madinah 2). 1 he latter went to plead the cause of these simple folk,

1) 1 he great bell which now hangs from a tree near the Governor's house at Kuta Raja is believed by the Achehnese to be one of those of the Chakra Dönya.

2) Ja properly means grandfather or great-grandfather, and Pakeh is the Arabic faqïh = a teacher of the law. The designation of famous persons by the name of the place of their origin or residence is universal in Acheh.