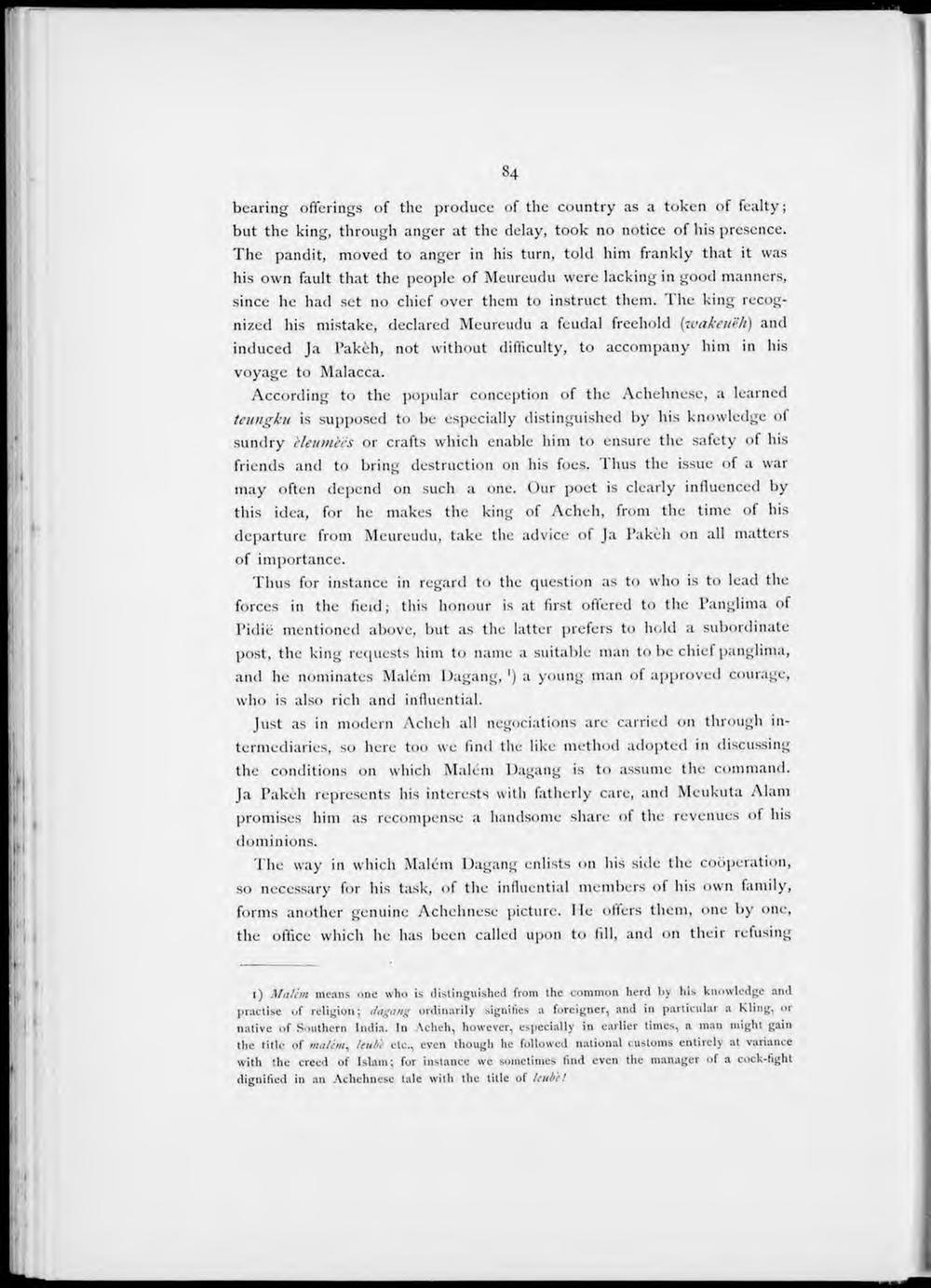 hearing offcrings of the produce of the country as a token of fealty; hut the king, through anger at the delay, took no notice of his presence. The pandit, moved to anger in his turn, told him frankly that it was his own fault that the people of Meureudu were lacking in good manners, since he had set no chief over them to instruct them. 'I he king recognized his mistake, declared Meureudu a feudal freehold (wakettvh) and induced Ja Pakèh, not without difficulty, to accompany him in his voyage to Malacca.

Aecording to the popular conception of the Achehnese, a learned teungku is supposed to be especially distinguished by his knowledge of sundry èleumèës or crafts which enable him to ensure the safety of his friends and to bring destruction on his foes. I hus the issue of a war may often depend on such a one. Our poet is clearly influenced by this idea, for he makes the king of Acheh, from the time of his departure from Meureudu, take the advice of Ja Pakèh on all matters of importance.

Thus for instance in regard to the question as to who is to lead the forces in the fieid; this honour is at first ofïfered to the Panglima of Pidië mentioned above, but as the latter prefers to hold a subordinate post, the king requests him to name a suitable man to be chief panglima, and he nominates Malém Dagang, ') a young man of approved courage, who is also ricli and influential.

Just as in modern Acheh all negociations are carried on through intermediaries, so here too we find the like method adopted in discussing the conditions 011 which Malém Dagang is to assume the command. Ja Pakèh represents his interests with fatherly care, and Meukuta Alam promises him as recompense a handsome share of the revenues of his dominions.

The way in which Malém Dagang enlists 011 his side the coöperation, so necessary for his task, of the influential members of his own family, forms another genuine Achehnese picture. He offers them, one by one, the office which he lias been called upon to fill, and 011 their refusing

1) Malém means one who is distinguished from the common lierd by his knowledge and practise of religion; dagang ordinarily signifies a foreigner, and in parlicular a Kling, or native of Southern India. In Acheh, however, especially in earlier times, a man might gain the title of malém, lenbc etc., even though he followed national customs entirely at variance with the creed of Islam; for instance we sometimes find even the manager of a cock-fight dignified in an Achehnese tale with the title of leube!