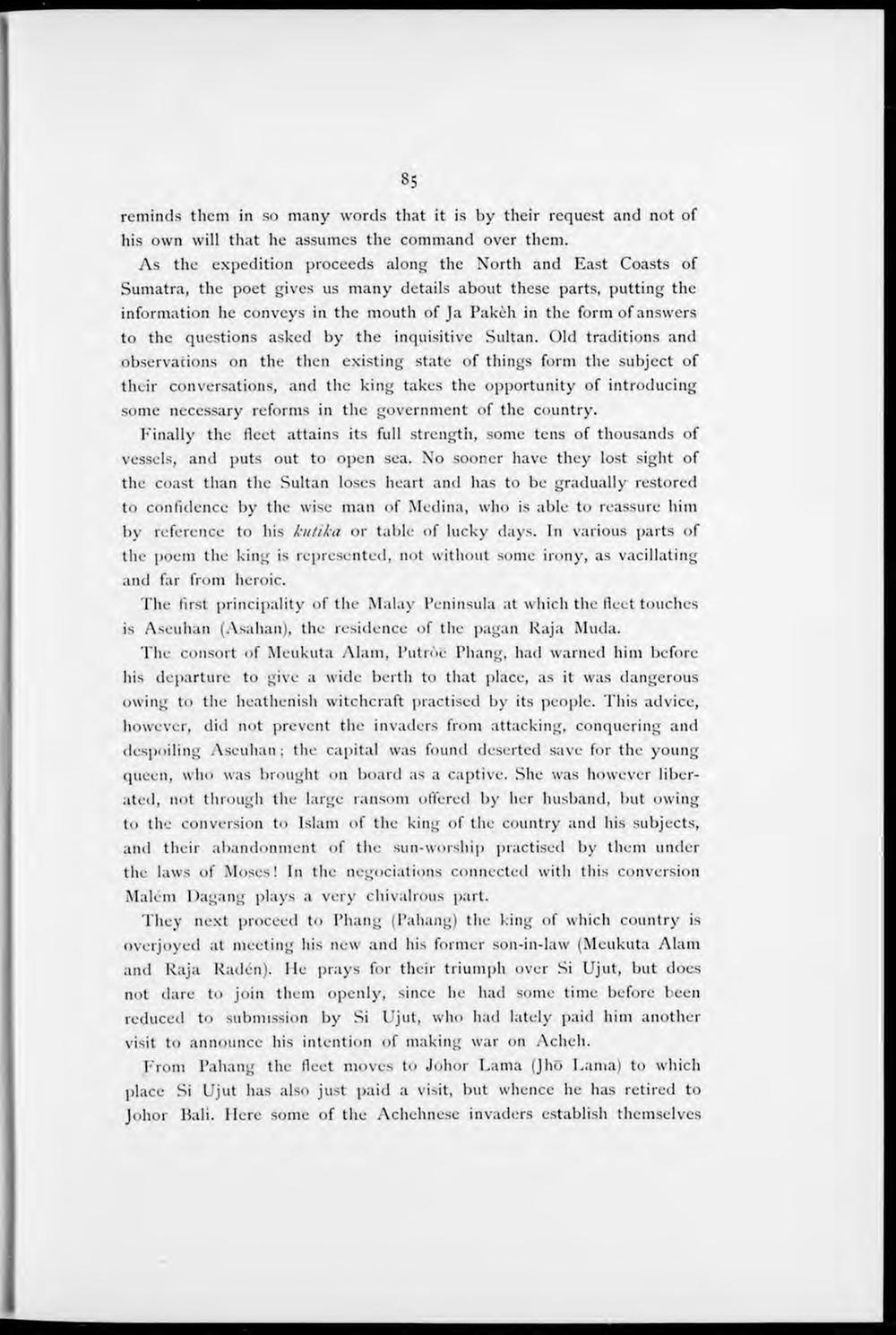 reminds thcm in so many words that it is by their requcst and not of his own will that he assumes the command over thcm.

As the expedition proceeds along the North and East Coasts of Sumatra, the poet gives us many details about these parts, putting the information he conveys in the mouth of Ja Pakèh in the form of answers to the questions asked by the inquisitive Sultan. Old traditions and observacions on the then existing state of things form the subject of their conversations, and the king takes the opportunity of introducing some necessary reforms in the government of the country.

Finally the fleet attains its full strength, some tens of thousands of vessels, and puts out to open sea. No sooner have they lost sight of the coast than the Sultan loses heart and has to be gradually restored to confidence by the wise man of Medina, who is able to reassure him by reference to his kutika or table of lucky days. In various parts of the poem the king is represented, not without some irony, as vacillating and far from heroic.

The first principality of the Malay Peninsula at which the fleet touches is Aseuhan (Asahan), the residence of the pagan Raja Muda.

The consort of Meukuta Alam, Putróe Phang, had warned him before his departure to give a wide berth to that place, as it was dangerous owing to the heathenish witchcraft practised by its people. This advice, howevcr, did not prevent the invaders from attacking, conquering and despoiling Aseuhan; the capital was found deserted save for the young queen, who was brought on board as a captive. She was however liberated, not through the large ransom offered by her husband, but owing to the conversion to Islam of the king of the country and his subjects, and their abandonment of the sun-worship practised by them under the laws of Moses! In the negociations connected witli this conversion Malém Dagang plays a very chivalrous part.

They next proceed to Phang (Pahang) the king of which country is overjoyed at meeting his new and his former son-in-law (Meukuta Alam and Raja Raden). He prays for their triumph over Si Ujut, but does not dare to join them openly, since he had some time before been reduced to submission by Si Ujut, who had lately paid him another visit to announce his intention of making war on Acheh.

From Pahang the fleet moves to Johor Lama (Jhö Lama) to which place Si Ujut has also just paid a visit, but whence he has retired to Johor Bali. Here some of the Achehnese invaders establish themselves