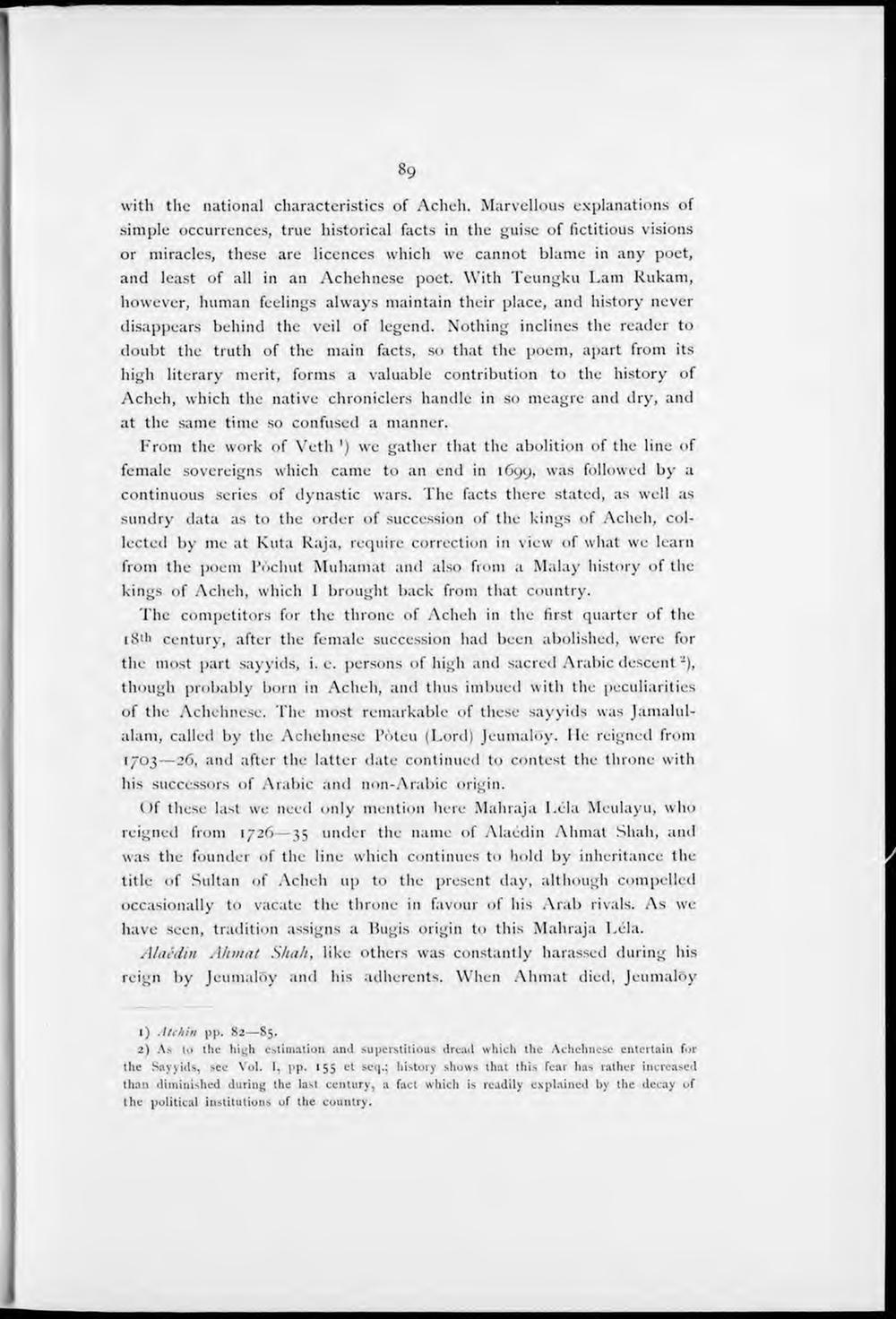 with the national charactcristics of Acheh. Marvellous explanations of simple occurrences, true historical facts in the guise of fictitious visions or miracles, these are licences which we cannot blame in any poet, and least of all in an Achehnese poet. With Teungku Lam Rukam, however, lntman feelings always maintain their place, and history never disappears behind the veil of legend. Nothing inclines the reader to doubt the truth of the main facts, so that the poem, apart from its high literary merit, forms a valuable contribution to the history of Acheh, which the native chroniclers handle in so meagre and dry, and at the same time so confused a manner.

From the work of Veth ') we gather that the abolition of the line of female sovereigns which came to an end in 1699, was followed by a continuous series of dynastie wars. The facts there stated, as well as sundry data as to the order of succession of the kings of Acheh, collected by me at Kuta Raja, require correction in view of what we learn from the poem Pöchut Muhamat and also from a Malay history of the kings of Acheh, which I brought back from that country.

The competitors for the throne of Acheh in the first quarter of the i8(1> century, after the female succession had been abolished, were for the most part sayyids, i. e. persons of high and sacred Arabic descent though probably born in Acheh, and thus imbued with the peculiarities of the Achehnese. The most remarkable of these sayyids was Jamalulalam, called by the Achehnese Pöteu (Lord) Jeumalöy. He reigned from 1703—26, and after the latter date continued to contest the throne with his successors of Arabic and non-Arabic origin.

Of these last we need only mention here Mahraja Léla Meulayu, who reigned from 1726—35 under the name of Alaédin Ahmat Shah, and was the founder of the line which continues to hold by inheritance the title of Sultan of Acheh up to the present day, although compelled occasionally to vacate the throne in favour of his Arab rivals. As we have seen, tradition assigns a Bugis origin to this Mahraja Léla.

Alaédin Ahmat Shah, like others was constantly harassed during his reign by Jeumalöy and his adherents. When Ahmat died, Jeumalöy

2) As to the high estimation and superstitious dread which the Achehnese entertain for the Sayyids, see Vol. I, pp. 155 et seq.; history shows that this fear has rather increased than diminished during the last century, a fact which is readily explained by the decay of the political institutions of the country.