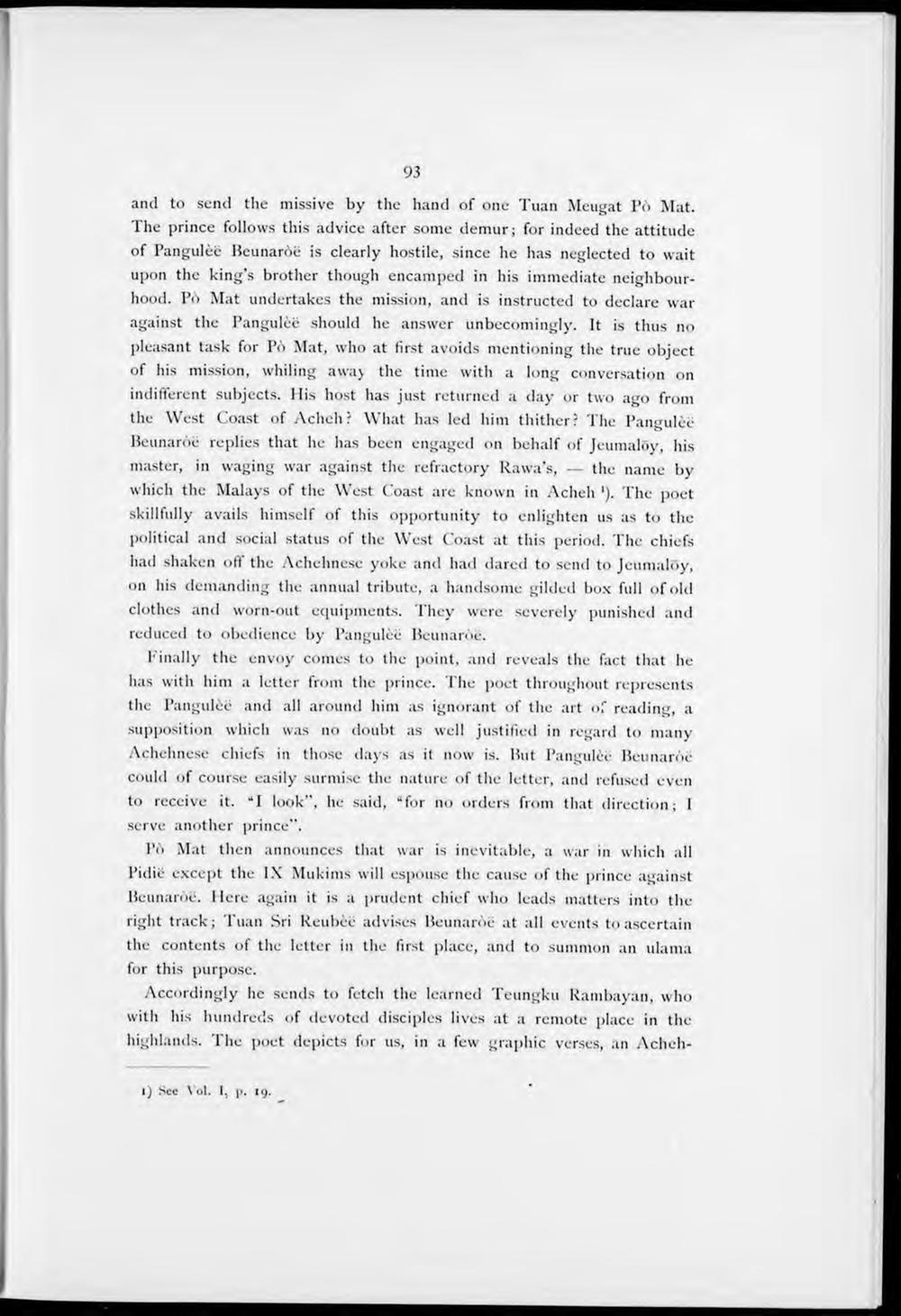 and to scnd the missive by the hand of one Tuan Meugat Pó Mat. The prince follows this advice after some demur; for indeed the attitude of Pangulèë Beunaróë is clearly hostile, since he has neglected to vvait upon the king's brother though encamped in his immediate neighbourhood. Po Mat undertakes the mission, and is instructed to declare war against the Pangulèë should he ansvver unbecomingly. It is tlius no picasant task for Pó Mat, who at first avoids mentioning the true object of his mission, whiling away the time with a long conversation on indifferent subjects. His host has just returned a day or two ago from the West Coast of Acheh? Wliat has led him thithcr? The Pangulèë Beunaróë replies that he has been engaged on behalf of Jeumalöy, his master, in waging war against the refractory Rawa's, — the name by which the Malays of the West Coast are known in Acheh '). The poet skillfully avails himself of this opportunity to enlighten us as to the political and social status of the West Coast at this period. The chiefs had shaken off the Achehnese yoke and had dared to send to Jeumalöy, on his demanding the annual tribute, a handsome gilded box full of old clothcs and worn-out equipments. They were severely punished and reduced to obedience by Pangulèë Beunaróë.

Finally the envoy comes to the point, and reveals the fact that he has with him a letter from the prince. The poet throughout represents the Pangulèë and all around him as ignorant of the art of reading, a supposition which was 110 doubt as well justified in regard to many Achehnese chiefs in those days as it now is. But Pangulèë Beunaróë could of course easily surmise the nature of the letter, and refused even to receive it. UI look", he said, "for 110 orders from that direction; I serve another prince".

Pó Mat then announces that war is inevitable, a war in which all Pidië except the IX Mukims will espouse the cause of the prince against Beunaróë. Here again it is a prudent chief who leads matters into the right track; Tuan Sri Reubèë advises Beunaróë at all events to ascertain the contents of the letter in the first place, and to summon an ulama for this purpose.

Accordingly he sends to fetch the learned Teungku Rambayan, who with his hundreds of devoted disciples lives at a remote place in the highlands. The poet depicts for us, in a few graphic verses, an Acheh-