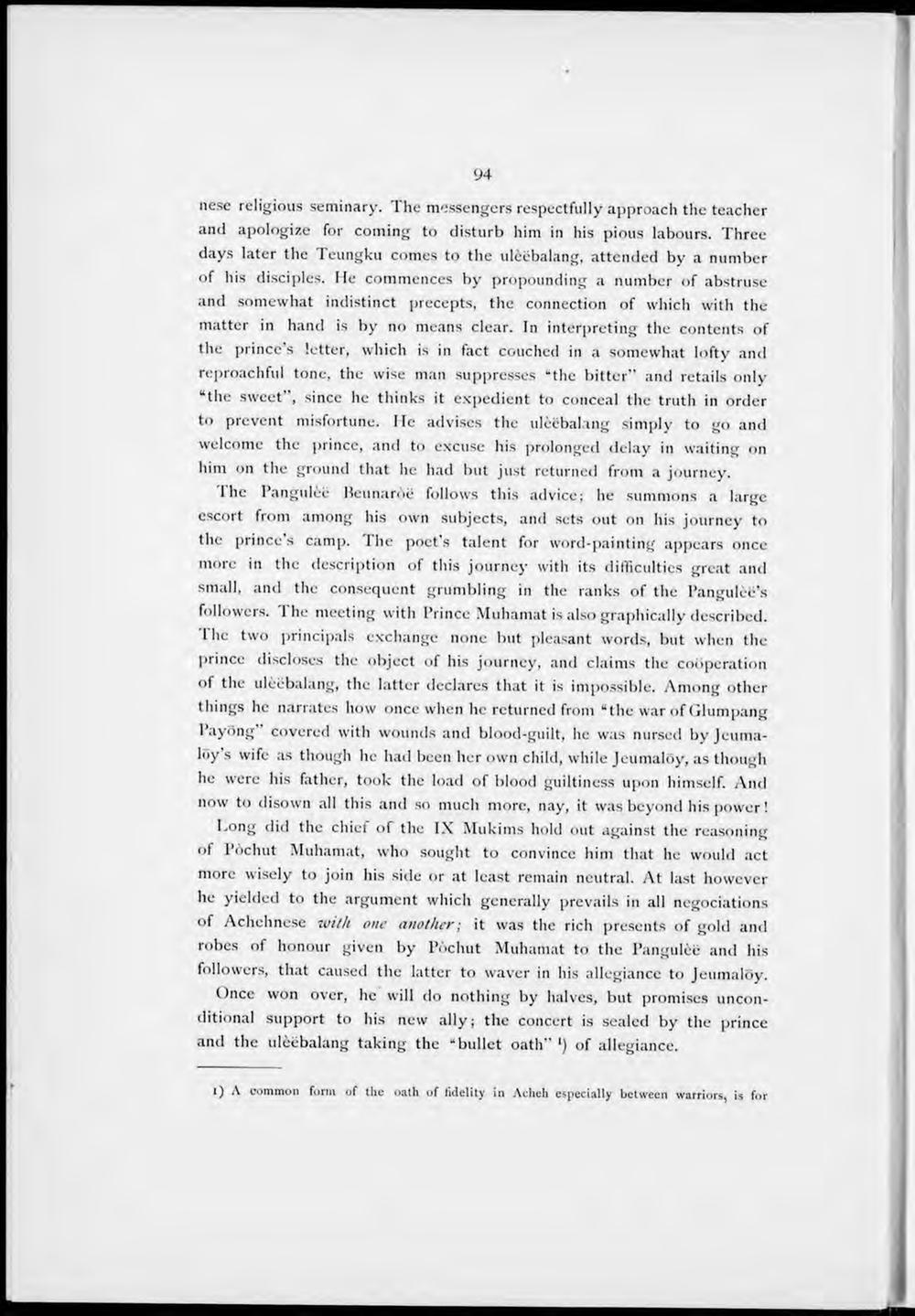 nese religious seminary. The messengers respectfully approach the teacher and apologize for coming to disturb him in his pious labours. Three days later the Teungku comes to the ulèëbalang, attended by a number of his disciples. He commences by propounding a number of abstruse and somewhat indistinct precepts, the connection of which with the matter in hand is by no means clear. In interpreting the contents of the prince's letter, which is in fact couched in a somewhat lofty and reproachful tone, the wise man suppresses "the bitter" and retails only "the sweet", since he thinks it expedient to conceal the truth in order to prevent misfortune. He advises the ulèëbalang simply to go and welcome the prince, and to excuse his prolonged delay in waiting on him on the ground that he had but just returned from a journey.

I he Pangulèë Beunaróë follows this advice; he summons a large escort from among his own subjects, and sets out on his journey to the prince's camp. Ihe poet's talent for word-painting appears once more in the description of this journey with its difficulties great and small, and the consequent grumbling in the ranks of the Pangulèë's followers. Ihe meeting with Prince Muhamat is also graphically described. Ihe two principals cxchange none but pleasant words, but when the prince discloses the object of his journey, and claims the coöperation of the ulèëbalang, the latter dcclares that it is impossible. Among other things he narrates how once when he returned from "the war of Glumpang Payöng' covered with wounds and blood-guilt, he was nursed by Jeumalöy s wife as though he had been her own child, while Jeumalöy, as though he were his father, took the load of blood guiltiness upon himself. And now to disown all this and so much more, nay, it was beyond his power!

Long did the chiet of the IX Mukims hold out against the reasoning of Póchut Muhamat, who sought to convince him that he would act more wisely to join his side or at least remain neutral. At last however he yielded to the argument which generally prevails in all negociations of Achehnese zvith ouc another; it was the rich presents of gold and robes of honour given by Póchut Muhamat to the Pangulèë and his followers, that caused the latter to waver in his allegiance to Jeumalöy.

Once won over, he will do nothing by halves, but promises unconditional support to his new ally; the concert is sealed by the prince and the ulèëbalang taking the "hullet oatli" ') of allegiance.