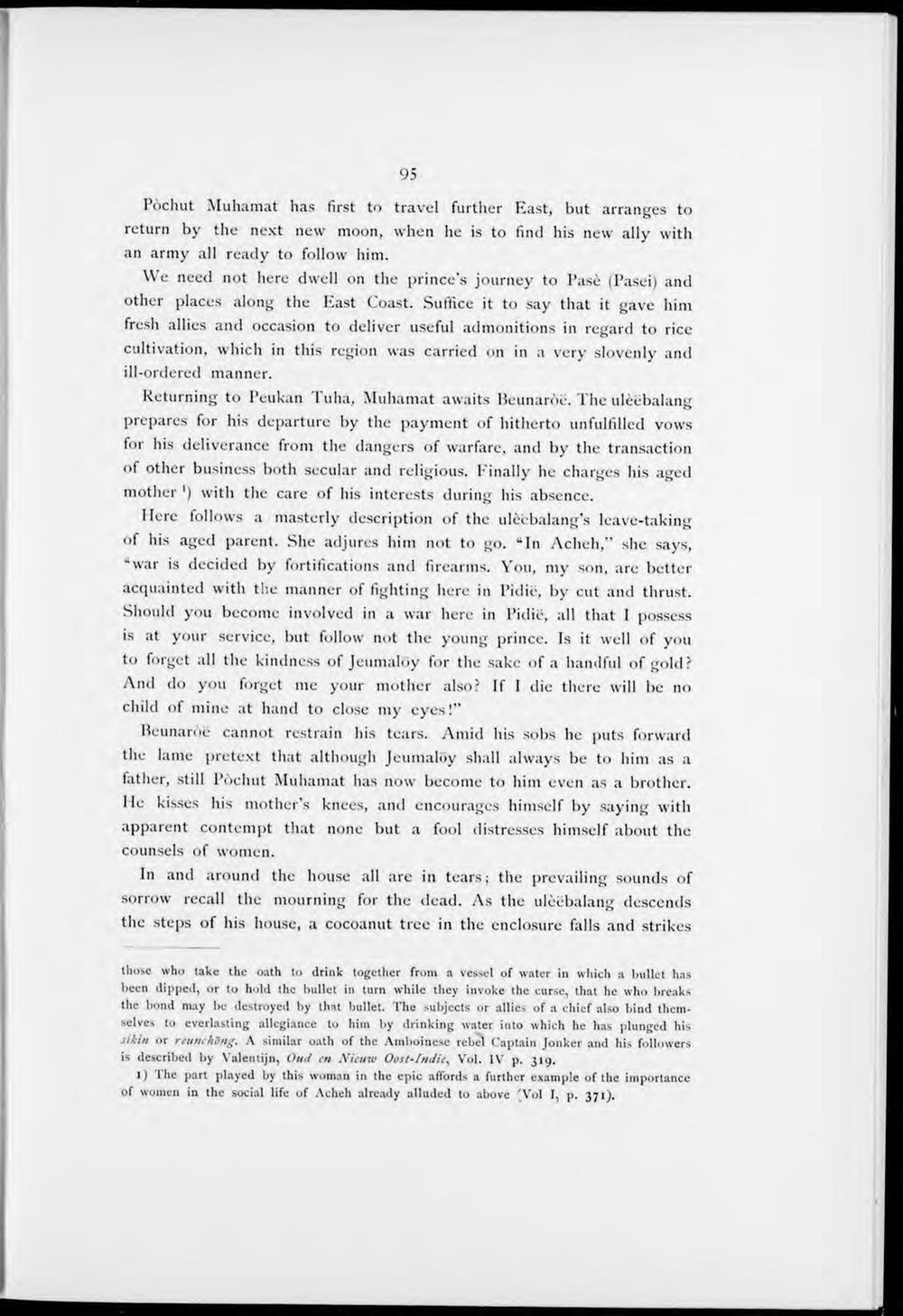 Póchut Muhamat has first to travel further East, but arranges to return by the next nevv moon, when he is to find his new ally with an army all ready to follow him.

We need not here dweil on the prince's journey to Pasè (Pasei) and other places along the East Coast. Suffice it to say that it gave him fresh allies and occasion to deliver useful admonitions in regard to rice cultivation, which in this region was carried on in a very slovenly and ill-ordered manner.

Returning to Peukan Tuha, Muhamat awaits Beunaróë. The ulèëbalang prepares for his departure by the payment of hitherto unfulfilled vows for his deliverance from the dangers of warfare, and by the transaction of other business both secular and religious. Finally he charges his aged mother ') with the care of his interests during his absence.

Here follows a masterly description of the ulèëbalang's leave-taking of his aged parent. She adjures him not to go. "In Acheh," she says, "war is decided by fortifications and firearms. You, my son, are better acquainted with the manner of fighting here in Pidië, by cut and thrust. Should you become involved in a war here in Pidië, all that I possess is at your service, but follow not the young prince. Is it well of you to forget all the kindness of Jeumalöy for the sake of a hamlful of gold? And do you forget me your mother also? If I die there will be no child of mine at hand to close my eyes!"

Beunaróë cannot restrain his tears. Amid his sobs he puts forward the lame pretext that although Jeumalöy shall always be to him as a father, still Póchut Muhamat has now become to him even as a brother. He kisses his mother's knees, and encourages himself by saying with apparent contempt that none but a fooi distresses himself about the counsels of women.

In and around the house all are in tears; the prevailing sounds of sorrow recall the mourning for the dead. As the ulèëbalang descends the steps of his house, a cocoanut tree in the enclosure falls and strikes

those who take the oath to drink together from a vessel of water in which a bullet has been dipped, or to hold the bullet in turn while they invoke the curse, that he who breaks the bond may be destroyed by that bullet. The subjects or allies of a chief also bind themselves to everlasting allegiance to him by drinking water into which he has plunged his sikin or reunchöng. A similar oath of the Amboinese rebel Captain Jonker and his followers is described by Yalentijn, Oud en Nieuw Oost-Indië, Vol. IV p. 319.

1) Ihe part played by this woman in the epic affords a further example of the importance of women in the social life of Acheh already alluded to above 'Vol I, p. 371).