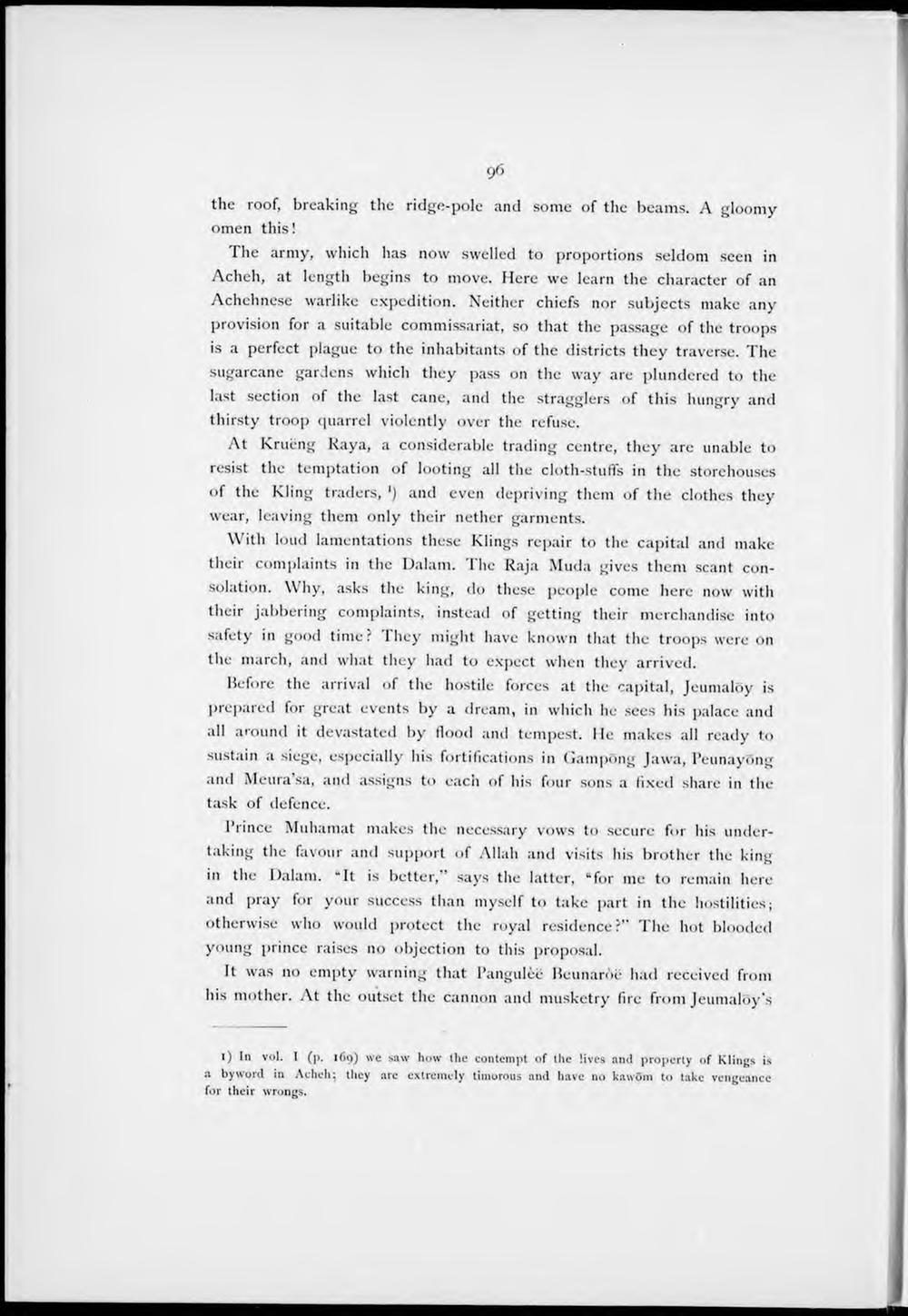 the roof, breaking the ridge-pole and sortie of the beams. A gloomy omen this!

The army, which has now swelled to proportions seldom seen in Acheh, at length begins to move. Here we learn the character of an Achehnese warlike expedition. Neither chiefs nor subjects make any provision for a suitable commissariat, so that the passage of the troops is a perfect plague to the inhabitants of the districts they traverse. The sugarcane gardens which they pass on the way are plundered to the last section of the last cane, and the stragglers of this hungry and thirsty troop quarrel violently over the refuse.

At Kruëng Raya, a considerable trading centre, they are unable to resist the temptation of looting all the cloth-stuffs in the storchouses of the Kling traders, ') and even depriving them of the clothes they wear, leaving them only their nether garments.

Witli loud lamentations these Klings repair to the capital and make their complaints in the Dalam. Ihe Raja Muda gives them scant consolation. Why, asks the king, do these people come here now with their jabbering complaints, instead of getting their merchandise into safety in good time? They might have known that the troops were on the march, anti what they had to expect when they arrived.

Before the arrival of the hostile forces at the capital, Jeumalöy is prepared for great events by a dream, in which he sees his palace and all around it devastated by flood and tempest. He makes all ready to sustain a siege, especially his fortifications in Gampöng Jawa, Peunayöng and Meura'sa, and assigns to each of his four sons a fixed share in the task of defence.

I'rince Muhamat makes the necessary vows to secure for his undertaking the favour and support of Allah and visits his brother the king in the Dalam. "It is better, says the latter, "for me to remain here and pray for your success than myself to take part in the hostilities; otherwise who would protect the royal residence ?" The hot blooded young prince raises no objection to this proposal.

It was 110 empty warning that 1'angulèe Beunaróë had received from his mother. At the outset the cannon and musketry fire from Jeumalöy's

1) In vol. I (p. 169) we saw how the contempt of the lives and property of Klings is a byword in Acheh; they are extremely timorous and have no kawöm to take vengeance for their wrongs.