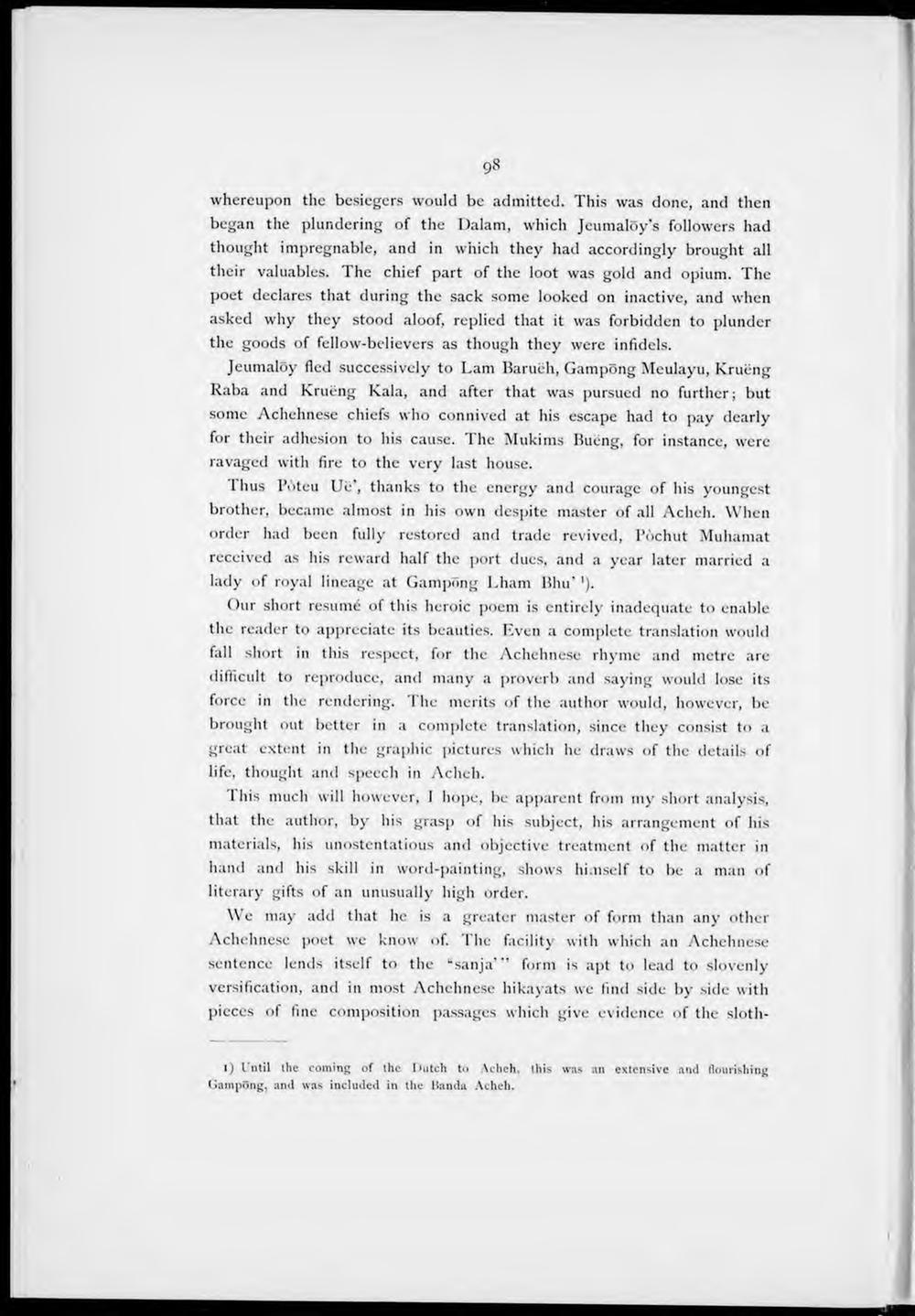 whereupon the besiegers would bc admitted. This was done, and then bcgan the plundering of the Dalam, which Jeumalöy's followers had thought impregnable, and in which tliey had accordingly brought all their valuables. The chief part of the loot was gold and opium. The poet declares that during the sack some looked on inactive, and when asked why tliey stood aloof, replied that it was forbidden to plunder the goods of fellow-believers as though tliey were infidels.

Jeumalöy fled successively to Lam Baruëh, Gampöng Meulayu, Kruëng Raba and Kruëng Kala, and after that was pursued no further; but some Achehnese chiefs who connived at his escape had to pay dearly for their adhesion to his cause. The Mukims Buëng, for instance, were ravaged with fire to the very last house.

Ihus Póteu Uë', thanks to the energy and courage of his youngest brother, became almost in his own despite master of all Acheh. When order had been fully restored and trade revived, Póchut Muhamat reccived as his reward half the port dues, and a year later married a lady of royal lineage at Gampöng Lham Bhu' ').

Our short resumé of this heroic poem is entirely inadequate to enable the reader to appreciate its beauties. Even a complete translation would fall short in this respect, for the Achehnese rhyme and metre are difficult to reproduce, and many a proverb and saying would lose its force in the rendering. The merits of the author would, however, bc brought out better in a complete translation, since tliey consist to a great extent in the graphic pictures which he draws of the details of life, thought and speech in Acheh.

1 his mucli will however, I hope, be apparent from my short analysis, that the author, by his grasp of his subject, his arrangement of his materials, his unostentatious and objcctive treatment of the matter in hand and his skill in word-painting, shows hi.uself to be a man of literary gifts of an unusually high order.

We may add that he is a greater master of form than any otlier Achehnese poet we know of. The facility with which an Achehnese sentence lends itself to the "sanja"' form is apt to lead to slovenly versification, and in most Achehnese hikayats we find side by side with pieces of fine composition passages which give evidence of the slotli-

i) l ntil the coming of the Dutch to Acheh. this was an extensive and flourishing Gampöng, and was included in the lianda Acheh.