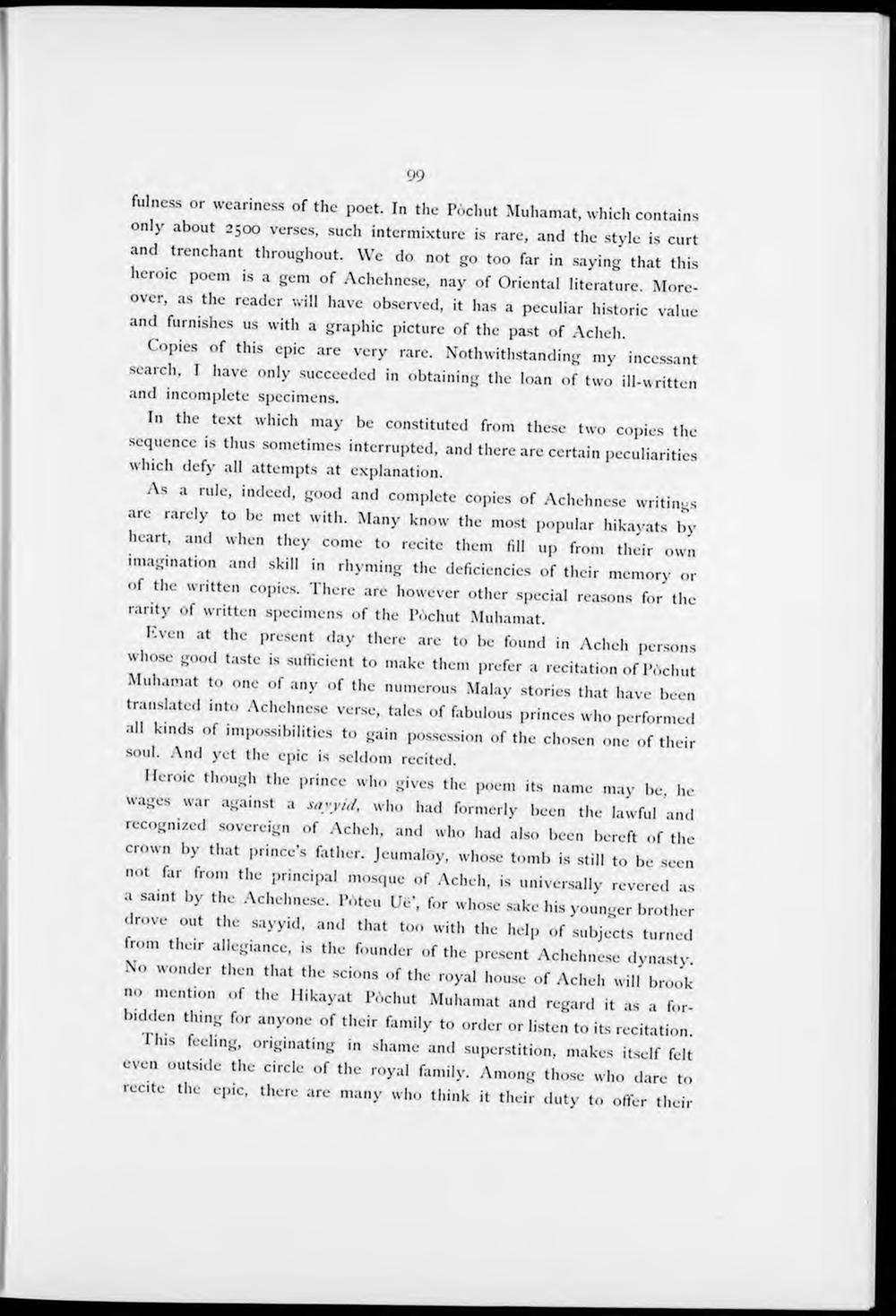 fulness or weariness of the poet. In the Póchut Muhamat, which contains on y about 2500 verses, such intermixture is rare, and the style is curt and trenchant throughout. We do not go too far in saying that this ïeroic poem is a gem of Achehnese, nay of Oriental Iiterature. Moreover, as the reader will have observed, it lias a peculiar historie value and furnishes us with a graphic picture of the past of Acheh.

Copies of this epic are very rare. Nothwithstanding my incessant search, I have only succeeded in obtaining the loan of two ill-vvritten and incomplete specimens.

In the text which may be constituted from these two copies the sequence is thus sometimes interrupted, and there are certain peculiarities which defy all attempts at explanation.

As a rule, indeed, good and complete copies of Achehnese writin-s are rarely to be met with. Many know the most popular hikayats by heart, and when tliey come to recite them fill Up from their own imagination and skill in rhyming the deficiencies of their memory or of the wr.tten copies. There are however other special reasons for the rarity of written specimens of the Póchut Muhamat.

Even at the present day there are to be found in Acheh persons whose good taste is sufficiënt to make them prefer a recitation of Póchut Muhamat to one of any of the numerous Malay stories that have been translated mto Achehnese verse, tales of fabulous princes wlio performed all kinds of .mpossibilities to gain possession of the chosen one of their soul. And yet the epic is seldom recited.

Heroic though the prince who gives the poem its name may be he wages war against a sayyid, who had formerly been the lawful and recognized sovereign of Acheh, and who had also been bereft of the crown by that prince's father. jeumalöy, whose tomb is still to be seen not far from the principal mosque of Acheh, is universally revered as a saint by the Achehnese. Póteu Uë', for whose sake his younger brother drove out the sayyid, and that too with the help of subjects turned from their allegiance, is the founder of the present Achehnese dynasty No wonder then that the scions of the royal house of Acheh will brook no mention of the Hikayat Póchut Muhamat and regard it as a forbidden thing for anyone of their family to order or listen to its recitation.

lis fccling, originating in shame and superstition, makes itself feit even outside the circle of the royal family. Among those who dare to recite the epic, there are many who think it their duty to offer their