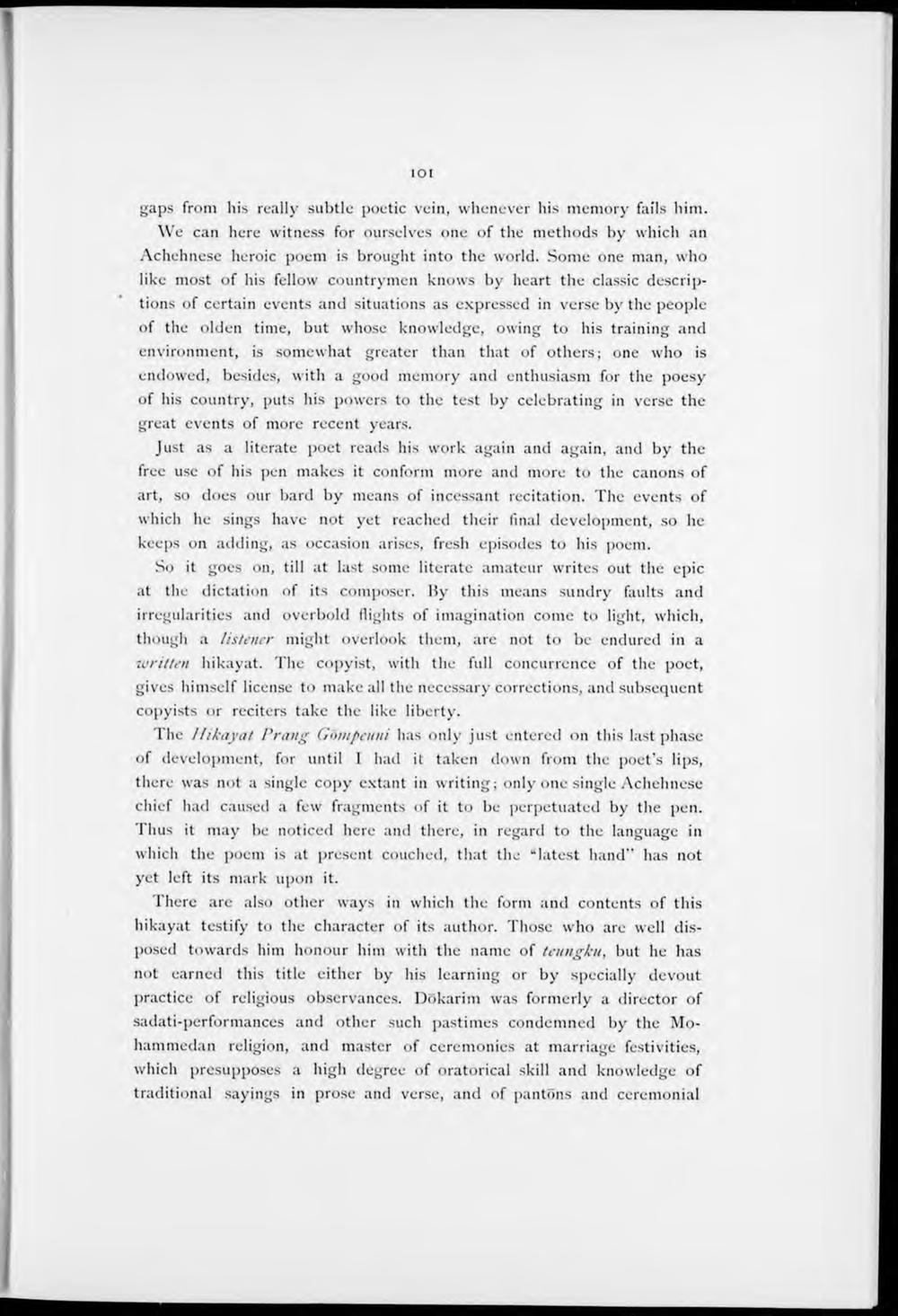 gaps from Iris reaily subtle poetic vein, whenever his memory fails him.

We can here witness for ourselves one of the methods by which an Achehnese heroic poem is brought into the world. Some one man, who like most of his fellow countrymen knows by heart the classic descriptions of certain events and situations as expressed in verse by the people of the olden time, but whose knowledge, owing to his training and environment, is somewhat greater than that of others; one who is endowed, besides, with a good memory and enthusiasm for the poesy of his country, puts his powers to the test by celebrating in verse the great events of more recent years.

Just as a literate poet reads his work again and again, and by the free use of his pen makes it conform more and more to the canons of art, so does our bard by means of incessant recitation. The events of which he sings have not yet reached their final development, so he keeps on adding, as occasion arises, fresh episodes to his poem.

So it goes on, till at last some literate amateur writes out the epic at the dictation of its composer. By this means sundry faults and irregularities and overbold flights of imagination come to light, which, though a listener might overlook them, are not to be endured in a written hikayat. The copyist, with the full concurrence of the poet, gives himself license to make all the necessary corrections, and subsequent copyists or reciters take the like liberty.

The Hikayat Prang Gömpeuni lias only just entered on this last phase of development, for until I had it taken down from the poet's lips, there was not a single copy extant in writing; only one single Achehnese chief had caused a few fragments of it to be perpetuated by the pen. Thus it may be noticed here and there, in regard to the language in which the poem is at present couched, that the "latest hand" has not yet left its mark upon it.

There are also other ways in which the form and contents of this hikayat testify to the character of its author. Thosc who are well disposed towards him honour him with the name of teungku, but he has not earned this title either by his learning or by specially devout practice of religious observances. Dokarim was formerly a director of sadati-performances and other such pastimes condemned by the Mohammedan religion, and master of ceremonies at marriage festivities, which presupposes a high degree of oratorical skill and knowledge of traditional sayings in prose and verse, and of pantöns and ceremonial