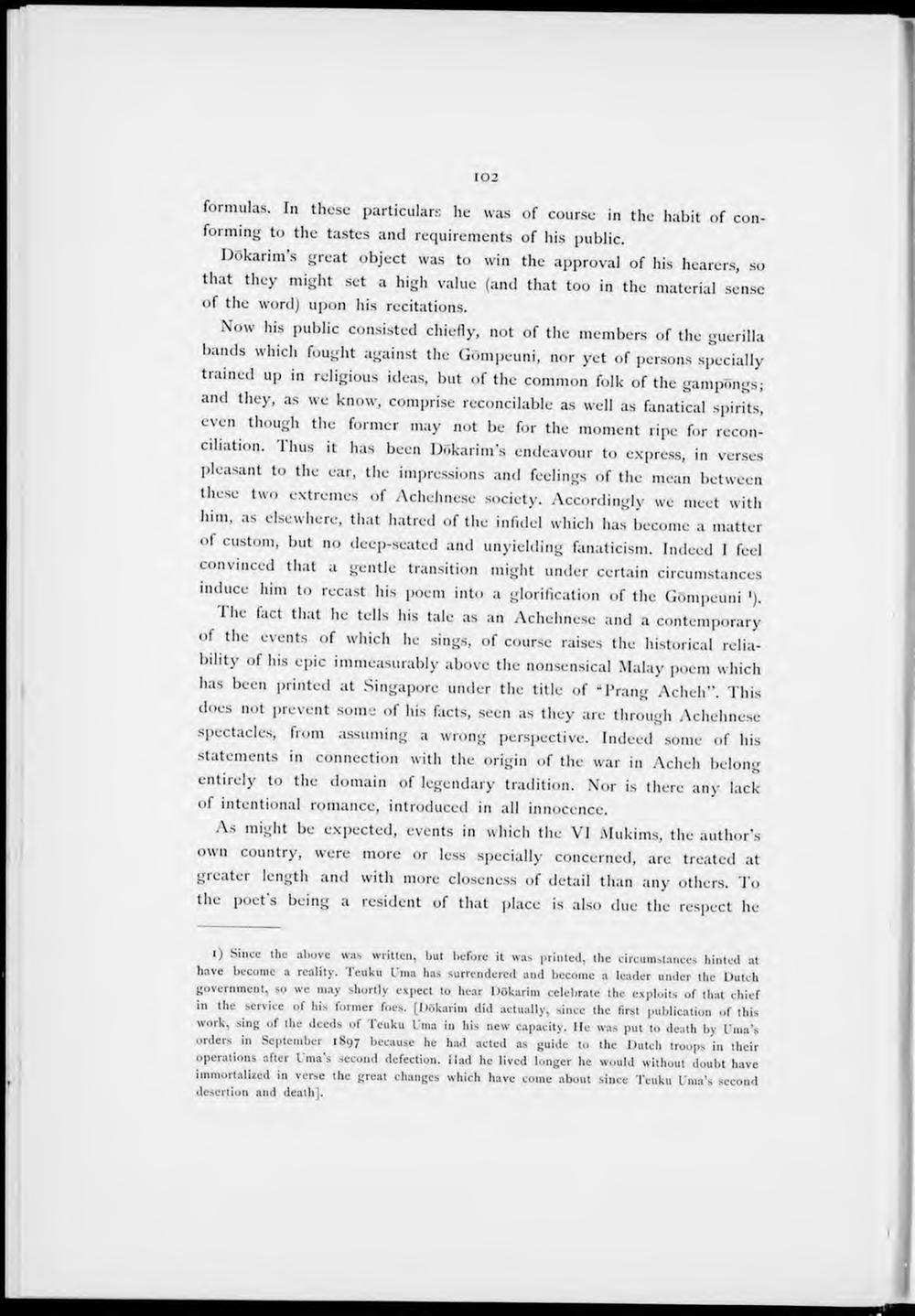 formulas. In these particulars he was of course in the habit of conforming to the tastes and requirements of his public.

Dokarim s great object was to win the approval of his hearers, so that they might set a high value (and that too in the material sense of the word) upon his recitations.

Now his public consisted chiefly, not of the members of the guerilla bands which fought against the Gömpeuni, nor yet of persons specially trained up in rehgious ideas, but of the common folk of the gampöngs; and they, as we know, comprise reconcilable as well as fanatical spirits, even though the former may not be for the moment ripe for reconciliation. llius it has been Dokarim's endeavour to express, in verses pleasant to the ear, the impressions and feelings of the mean between these two extremes of Achehnese society. Accordingly we meet with him, as elsewhere, that hatred of the infidel which has become a matter of custom, but no deep-seated and unyielding fanaticism. Indeed I feel convinced that a gentle transition might under certain circumstances induce him to recast his poem into a glorification of the Gömpeuni ').

I he fact that he tells his tale as an Achehnese and a contemporary of the events of which he sings, of course raises the historical reliability of his epic immeasurably above the nonsensical Malay poem which has been printed at Singapore under the title of "Prang Acheh". This does not prevent some of his facts, seen as they are through Achehnese spectacles, from assuming a wrong perspective. Indeed some of his statements in connection with the origin of the war in Acheh belong entirely to the domain of legendary tradition. Nor is there any lack of intentional romance, introduced in all innocence.

As might be expected, events in which the VI Mukims, the author's own country, were more or less specially concerned, are treated at greater length and with more closeness of detail than any others. To the poets being a resident of that place is also due the respect he

i) Since the above was written, but before it was printed, the circumstances hinted at have become a reality. leuku Uma has surrendered and become a leader under the Dutch government, so we may shortly expect to hear Dokarim celebrate the cxploits of that chief in the service of his former foes. [Dokarim did actually, since the first publication of this work, sing of the dceds of Teuku Uma in his new capacity. He was put to death by Uma's orders in September 1897 because he had acted as guide to the Dutch troops in their operations after l ma s second defection. ilad he livcd longer he would without doubt have immortalized in verse the great changes which have coine about since Teuku Uma's second desertion and death].