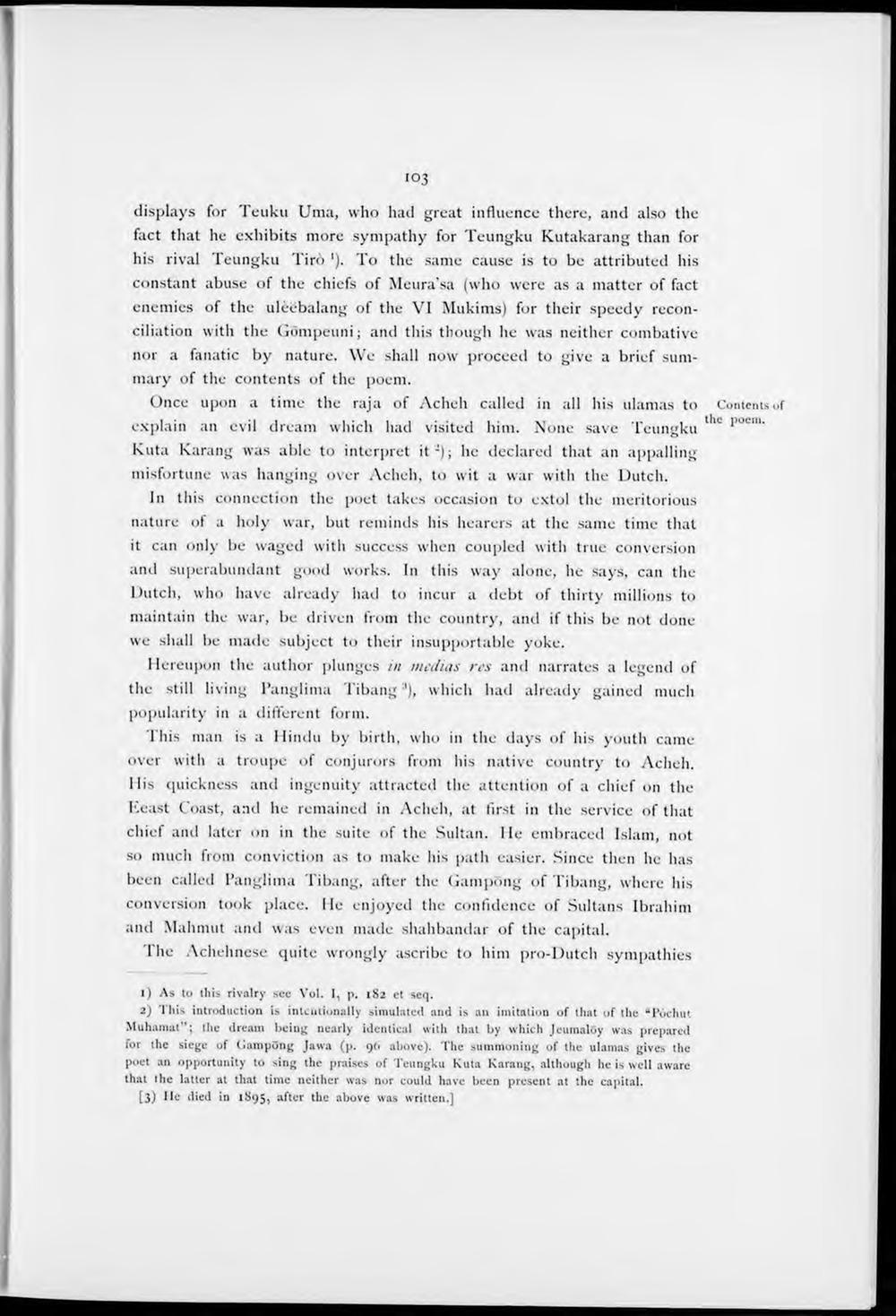 displays lor leuku Uma, who had great innuence there, and also the fact that he exhibits more sympathy for Teungku Kutakarang than for his rival Teungku Tiró '). To the same cause is to be attributed his constant abuse of the chiefs of Meura'sa (who were as a matter of fact enemies of the ulèebalang of the VI Mukims) for their speedy reconciliation with the Gömpeuni; and this though he was neither combative nor a fanatic by nature. We shall now proceed to give a brief summary of the contents of the poem.

Once upon a time the raja of Acheh called in all his ulamas to Contents of explain an evil dream which had visited him. None save Teungku thc poem* Kuta Karang was able to interpret it -); he declared that an appalling misfortune was hanging over Acheh, to wit a war with the Dutch.

In this connection the poet takes occasion to extol the meritorious nature of a holy war, but reminds his hearers at the same time that it can only be waged with success when coupled with true conversion and superabundant good works. In this way alone, he says, can the Dutch, who have already had to incur a debt of thirty millions to maintain the war, be driven from the country, and if this be not done we shall be made subject to their insupportable yoke.

Hereupon the author plunges in rnedias res and narrates a legend of the still living Panglima Tibang:'), which had already gained much popularity in a different form.

This man is a Hindu by birth, who in the days of his youth came over with a troupe of conjurors from his native country to Acheh. His quickness and ingenuity attracted the attention of a chief on the Eeast Coast, anti he remained in Acheh, at first in the service of that chief and later on in the suite of the Sultan. Ile embraced Islam, not so much from conviction as to make his path easier. Since then he lias been called Panglima Tibang, after the Gampong of Tibang, where his conversion took place. He enjoyed the confidence of Sultans Ibrahim and Mahmut and was even made shahbandar of the capital.

2) This introduction is intcntionally simulated and is an imitation of that of the ttPóchut Muhamat"; the dream being nearly identical with that by which Jeumalöy was prepared for the siege of (lampöng Jawa (p. 96 above). The summoning of the ulamas gives the poet an opportunity to sing the praises of Teungku Kuta Karang, although he is well aware that the latter at that time neither was nor could have been present at the capital.