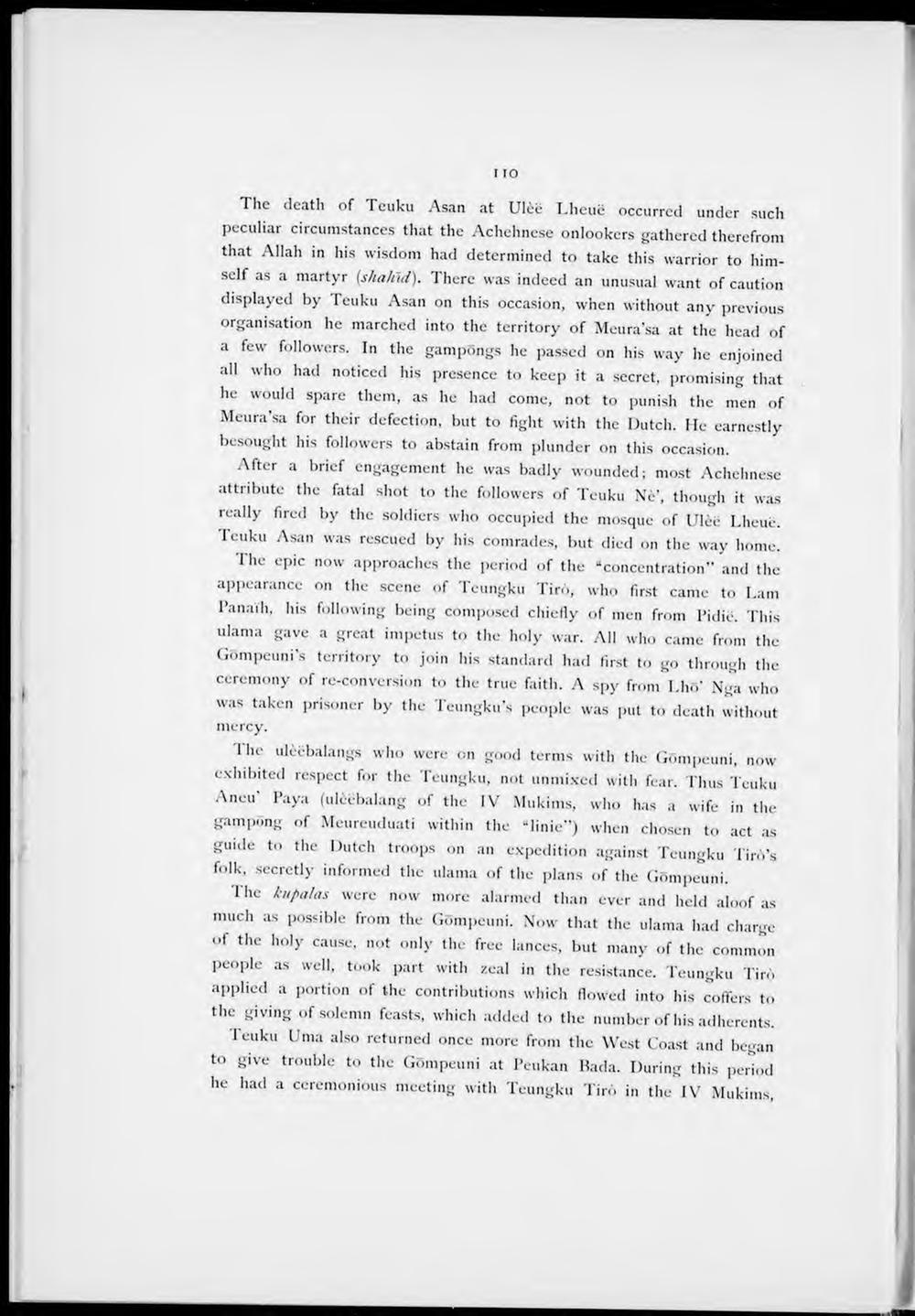 The death of Teuku Asan at Ulèë Lhcuë occurrcd under such peculiar circumstances that the Achehnese onlookers gathered therefrom that Allah in his wisdom had determined to take this warrior to himself as a martyr (sha/ild). There was indeed an unusual want of caution displayed by Teuku Asan on this occasion, when without any previous organisation he marched into the territory of Meura'sa at the head of a few followers. In the gampöngs he passed on his way he enjoined all who had noticed his presence to keep it a secret, promising that he would spare them, as he had come, not to punish the men of Meura'sa for their defection, but to fight with the Dutch. He earnestly besought his followers to abstain from plunder on this occasion.

After a brief engagement he was badly wounded; most Achehnese attribute the fatal shot to the followers of Teuku Nè', though it was really fircd by the soldiers who occupied the mosque of Ulèë Lheuë. Teuku Asan was rescued by his comrades, but died on the way home.

The epic now approaches the period of the "concentration" and the

appearance on the scene of Teungku Tin», who first came to Lam

Panaïh, his following being composed chiefly of men from Pidië. This

ulama gave a great impetus to the holy war. All who came from the

ceremony of re-conversion to the true faith. A spy from Lhö' Nga who

was taken prisoner by the Teungku's people was put to death without mercy.

I he ulèëbalangs who were on good terms with the Gömpeuni, now exhibited respect for the Teungku, not unmixed with fear. Thus Teuku Aneu' Paya (ulèëbalang of the IV Mukims, who has a wife in the gampong of Meureuduati within the "linie") when chosen to act as guide to the Dutch troops on an expedition against Teungku Tiró's folk, secretly informed the ulama of the plans of the Gömpeuni.

The h,palas were now more alarmed than ever and held aloof as much as possible from the Gömpeuni. Now that the ulama had charge of the holy cause, not only the free lances, but many of the common people as well, took part with zeal in the resistance. Teungku Tirö applied a portion of the contributions which flowed into his coffers to the giving of solemn feasts, which added to the number of his adherents.

I euku Uma also returned once more from the West Coast and began to give trouble to the Gömpeuni at Peukan Bada. During this period he had a ceremonious meeting with Teungku Tiró in the IV Mukims,