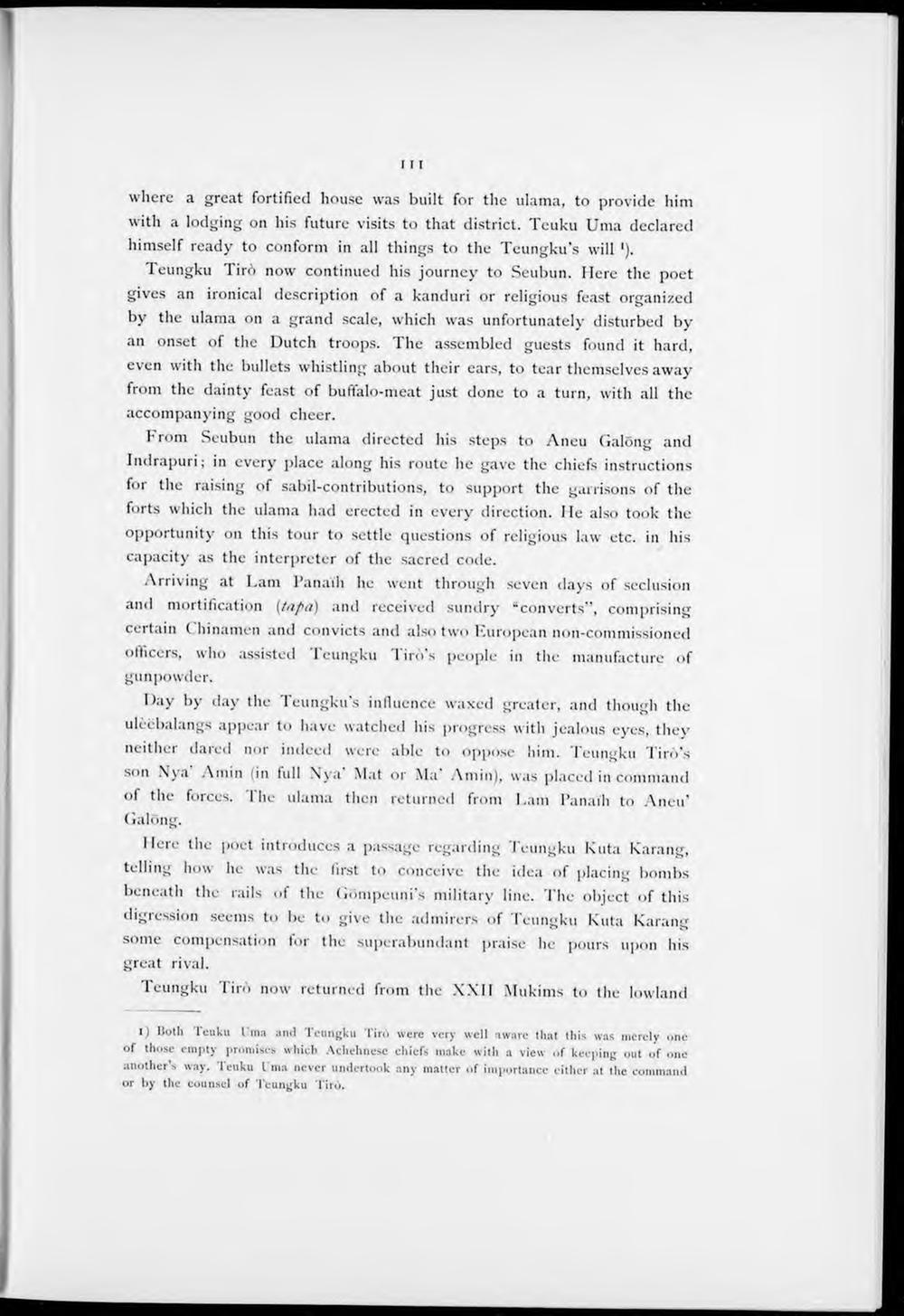 where a great fortified house was built for the ulama, to provide him with a lodging on his future visits to that district. Teuku Uma declared himself ready to conform in all things to the Teungku's will ').

Teungku Tirö now continued his journey to Seubun. Here the poet gives an ironical description of a kanduri or religious feast organized by the ulama on a grand scale, which was unfortunately disturbed by an onset of the Dutch troops. The assembled guests found it hard, even with the bullets whistling about their ears, to tear themselves away from the dainty feast of buftalo-meat just done to a turn, with all the accompanying good cheer.

F rom Seubun the ulama directed his steps to Aneu Galöng and Indrapuri; in every place along his route he gave the chiefs instructions for the raising of sabil-contributions, to support the garrisons of the forts which the ulama had erected in every direction. He also took the opportunity on this tour to settle questions of religious law etc. in his capacity as the interpreter of the sacred code.

Arriving at Lam Panaïh he went through seven days of seclusion and mortification (tnpa) and received sundry "converts", comprising certain C hinamen and convicts and also two Ruropean non-commissioned officers, who assisted Teungku Tiró's people in the manufacture of gunpowder.

I)ay by tlay the Teungku's influence waxed greater, and though the ulèëbalangs appear to have watched his progress with jealous eyes, they neither daied nor indeed vverc able to oppose him. 1 eungku Tiró's son Nya Amin (in full Nya Mat or Ma Amin), was placed in command of the forces. 1 he ulama then returned from Lam Panaïh to Aneu' (ialöng.

Here the poet introducés a passage regarding Ieungku Kuta Karang, telling how he was the first to conceive the idea of placing bombs beneath the rails of the Gömpeuni's military line. The object of this digression seems to be to give the admirers of Teungku Kuta Karang some compensation for the superabundant praise he pours upon his great rival.

i) Both Teuku Uma and Teungku Tiró were very well awarc that this was mcrely one of those empty promises which Achehnese chiefs make with a view of keeping out of one another's way. Teuku Uma never undertook any matter of importance either at the command or by the counsel of Teungku Tiró.