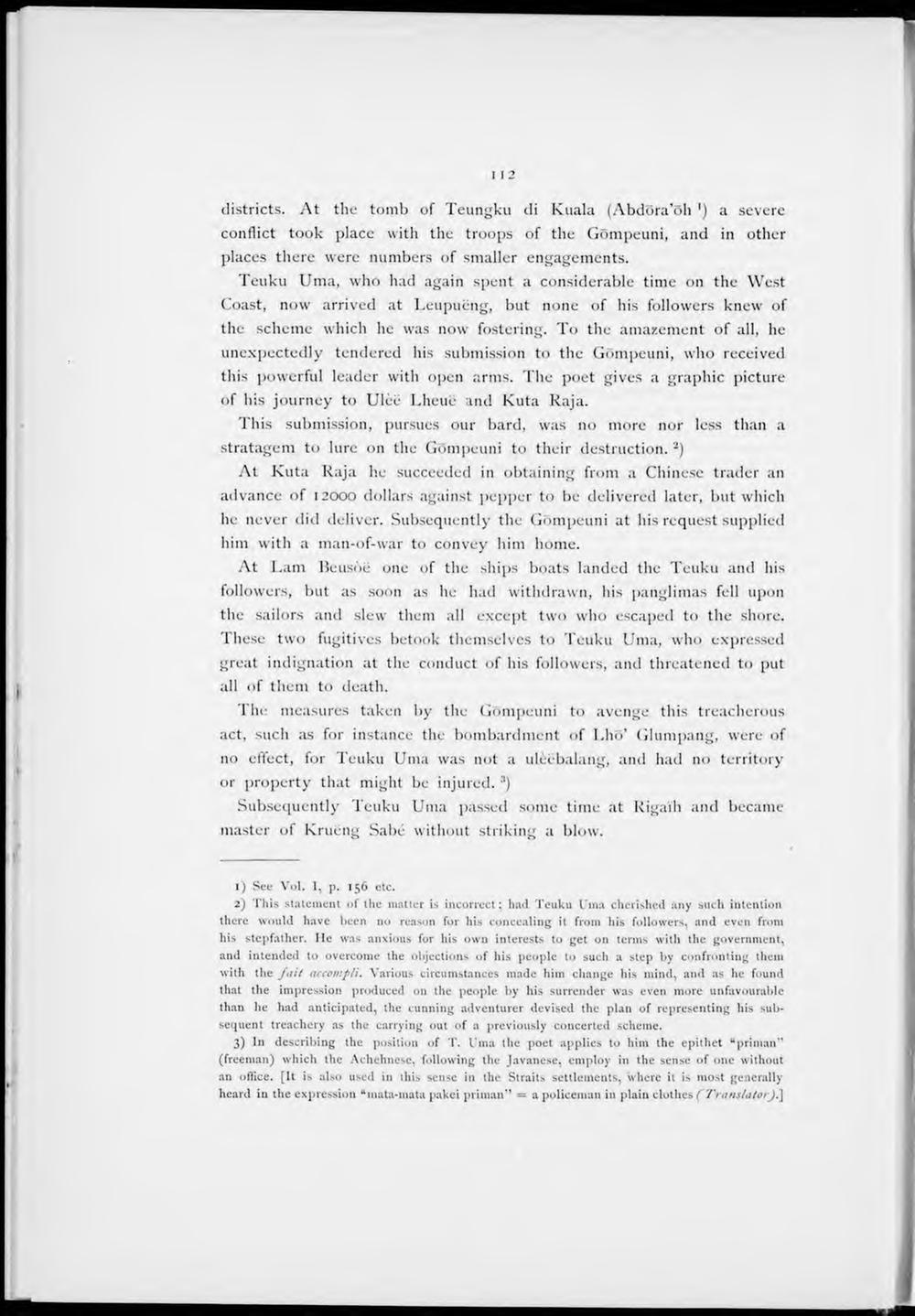 districts. At the tomb of Teungku di Kuala (Abdöra'oh ') a severe conflict took place with the troops of the Gömpeuni, and in other places there were numbers of smaller engagements.

Teuku Uma, who had again spent a considerable time on the West Coast, now arrived at Leupuëng, but none of his followers knew of the scheme which he was now fostering. To the amazement of all, he unexpectedly tendered his submission to the Gömpeuni, who received this powerful leader with open arms. The poet gives a graphic picture of his journey to Ulèë Lheuë and Kuta Raja.

This submission, pursues our bard, was no more nor less than a stratagem to lure on the Gömpeuni to their destruction.2)

At Kuta Raja he succeeded in obtaining from a Chinese trader an advance of 12000 dollars against pepper to be delivered later, but which he never did deliver. Subsequently the Gömpeuni at his request supplied him with a man-of-war to convey him home.

At Lam Beusöë one of the ships boats landed the Teuku and his followers, but as soon as he had withdrawn, his panglimas feil upon the sailors and slevv them all except two who escaped to the shore. These two fugitives betook themselves to Teuku Uma, who expressed great indignation at the conduct of his followers, and threatened to put all of them to death.

The measures taken by the Gömpeuni to avenge this treacherous act, such as for instance the bombardment of Lhö' Glumpang, were of no effect, for Teuku Uma was not a ulèëbalang, and had 110 territory or property that might be injured. 3)

Subsequently Teuku Uma passed some time at Rigaïh and became master of Kruëng Sabé without striking a blow.

2) This statement of the matter is incorrect; had Teuku Uma cherished any such intention there would have been no reason for his concealing it from his followers, and even from his stepfather. He was anxious for his own interests to get on terms with the government, and intended to overcome the objections of his people to such a step by confronting them with the fait accompli. Various circumstances made him change his mind, and as he found that the impression produced on the people by his surrender was even more unfavourable than he had anticipated, the cunning adventurer devised the plan of rcpresenting his subsequent treachcry as the carrying out of a previously concerted scheme.

3) ln describing the position of T. t'ma the poet applies to him the epithet "priman" (freeman) which the Achehnese, following the Javanese, employ in the sense of one without an office. [It is also used in this sense in the Straits settlements, where it is most generally heard in the expression "mata-mata pakei primair' = a policeman in plain clothes (Trans/atorJ.~\