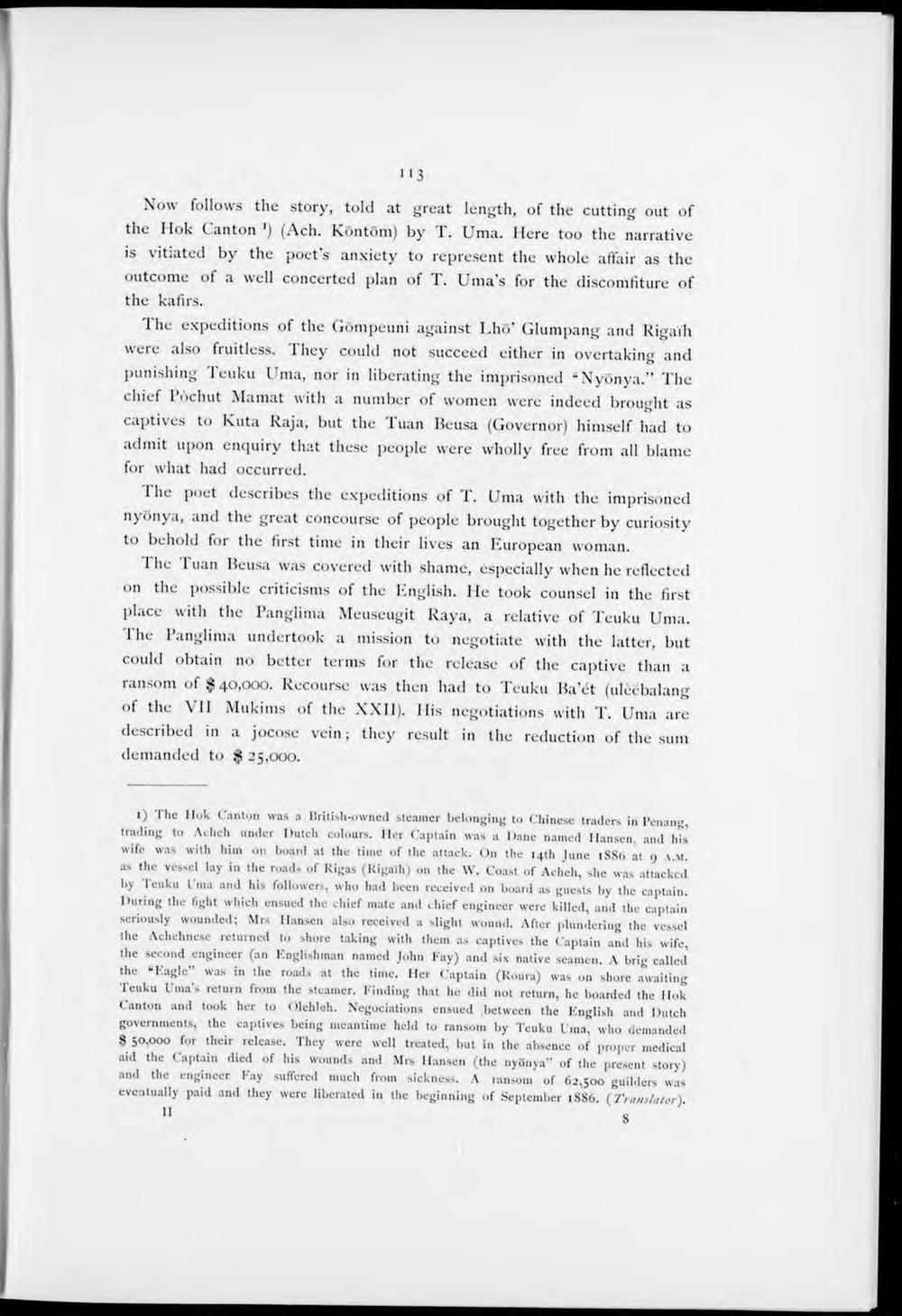 Now foliows the story, told at great length, of the cutting out of the Hok Canton ') (Ach. Köntöm) by T. Uma. Here too the narrative is \ itiated by the poet s anxiety to represeut the whole afifair as the outcome of a well concerted plan of 7. Uma's for the discomfiture of the kafirs.

1 he expeditions of the Gömpeuni against Lhö' Glumpang and Rigaïh were also fruitless. They could not succeed either in overtaking and punishing Teuku Uma, nor in liberating the imprisoned "Nyönya." The chief Pochut Mamat with a nurnber of women were indeed brought as captives to Kuta Raja, but the I uan Beusa (Governor) himself had to admit upon enquiry that these people were wholly free from all blame for what had occurred.

1 he poet describes the expeditions of T. Uma with the imprisoned nyönya, and the great concourse of people brought together by curiosity to bthold for the first time in their lives an Kuropean woman.

1 he 1 uan Beusa was covered with shame, especially when he reflected on the possible criticisms of the Lnglish. He took counsel in the first place with the Panglima Meuseugit Raya, a relative of Teuku Uma. I he Panglima undertook a mission to negotiate with the latter, but could obtain no better terms for the release of the captive than a ransom of $ 40,000. Recourse was then had to Teuku Ba'ét (ulèebalang of the \ II Mukims of the XXII). His negotiations with T. Uma are described in a jocose vein; they result in the reduction of the sum demanded to $ 25,000.

1) The Hok Canton was a British-owned steamer belonging to Chinese traders in Penang, trading to Aclieli under Dutch colours. Her Captain was a Dane named Hansen, and his' wife was with him 011 board at the time of the attack. O11 the 14111 June 1886 at 9 A.M. as the vessel lay in the roads of Rigas (Rigaïh) on the W. Coast of Acheh, she was attaeked l>y Teuku l'ma and his followers, who had been received on board as guests by the captain. During the fight which ensued the chief mate and chief engineer were killed, and the captain seriously wounded; Mis Hansen also received a sliglit wound. After plundering the vessel the Achehnese returned to shore taking with them as captives the Captain and his wife, the second engineer (an Englishman named John Kay) and six native seamen. A brig called the "Eagle" was in the roads at the time. Her Captain (Roura) was on shore awaiting leuku Uma's return from the steamer. Finding that he did not return, he boarded the Hok ( anton and took her to Olehleh. Negociations ensued between the Knglish and Dutch governments, the captives being meantime held to ransom by Teuku Uma, who demanded 8 50,000 for their release. They were well treated, but in the absence of proper medical aul the ( aptain died of his wounds and Mis Hansen (the nyönya" of the present story) and the engineer Kay suffered much from sickness. A ransom of 62,500 guilders was cvcatually paid and they were liberated in the beginning of September 18S6. (Transistor).