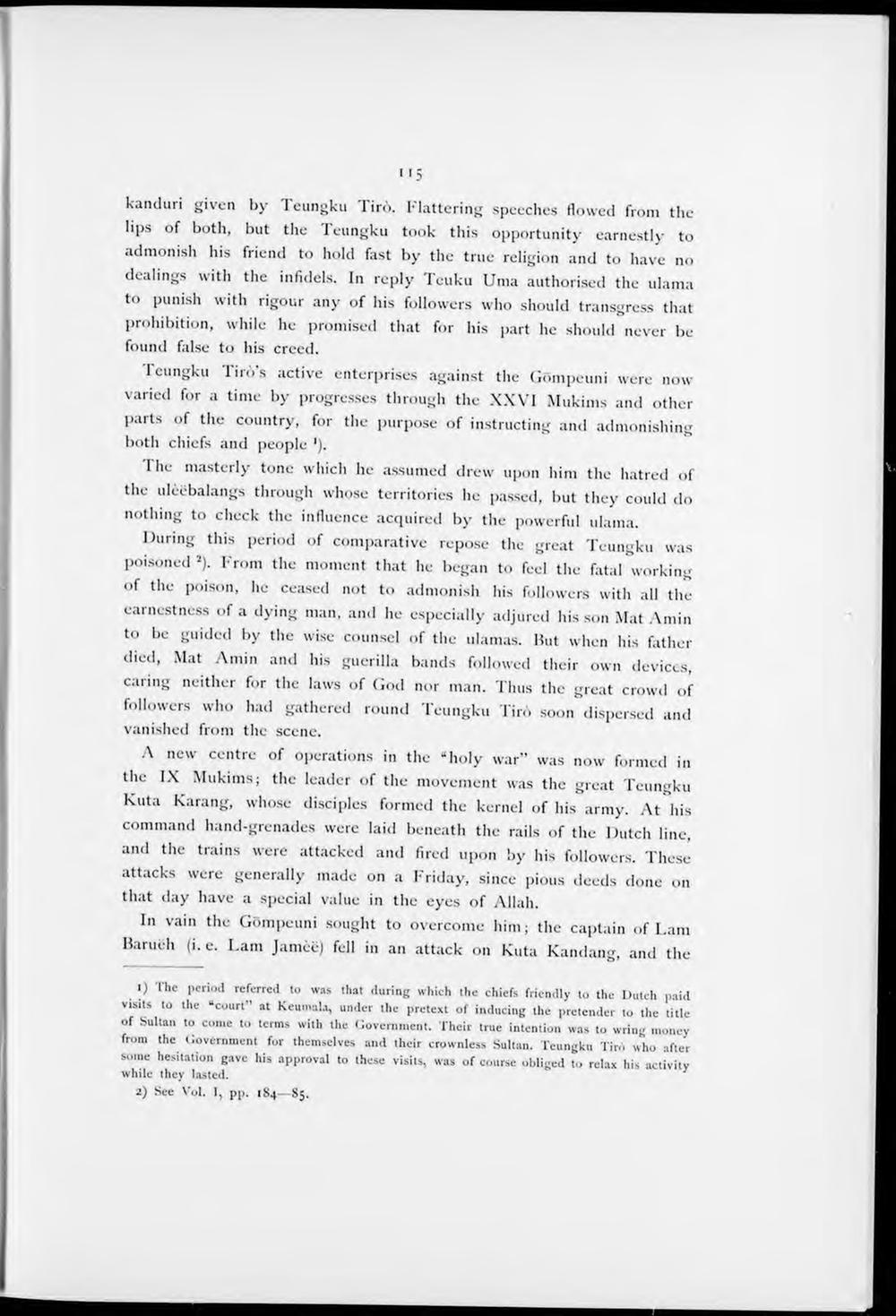 kanduri given by Teungku Tiró. Flattering speeches flowed from the lips of both, but the I eungku took this opportunity earnestly to admonish his friend to hold fast by the truc religion and to have no deahngs with the infidels. In rcply Teuku Uma authorised the ulama to punish with rigour any of his follovvers who should transgress that prohibition, while he promised that for his part he should never be found false to his creed.

I eungku Tiró's active enterprises against the Gömpeuni were now varied for a time by progresses through the XXVI Mukims and other parts of the country, for the purpose of instructing and admonishing both chiefs and people ').

I he masterly tone vvliich he assumed drew upon him the hatred of the ulèëbalangs through whose territories he passed, but they could do notlung to check the influence acquired by the powerful ulama.

Uuring this period of comparative repose the great Teungku was poisoned 2). From the moment that he began to feel the fatal working of the poison, he ceased not to admonish his followers with all the earnestness of a dying man, and he especially adjured his son Mat Amin to be guided by the wise counsel of the ulamas. Hut when his father died, Mat Amin and his guerilla bands followed their own devices, caring neither for the laws of God nor man. Thus the great crowd of followers who had gathered round Teungku Tiró soon dispersed and vanished from the scene.

A new centre of operations in the "holy war" was now formed in the IX Mukims; the leader of the movement was the great Teungku Kuta Karang, whose disciples formed the kernei of his army. At his command hand-grenades were laid beneath the rails of the Dutch line, and the trains were attacked and fired upon by his followers. These attacks were generally made on a Friday, since pious deeds done on that day have a special value in the eyes of Allah.

In vain the Gömpeuni sought to overcome him; the captain of Lam Baruëh (i.e. Lam Jamèë) feil in an attack on Kuta Kandang, and the

1) The period refcrred to was that during which the chiefs friendly to the Dutch paid visits to the "court" at Keumala, under the pretext of inducing the pretender to the title of Sultan to come to tcrms with the Government. Their true intention was to wring money from the Government for themselves and their crownless Sultan. Teungku Tiró who after some hesitation gave his approval to these visits, was of course obliged to relax his activity while they lasted.