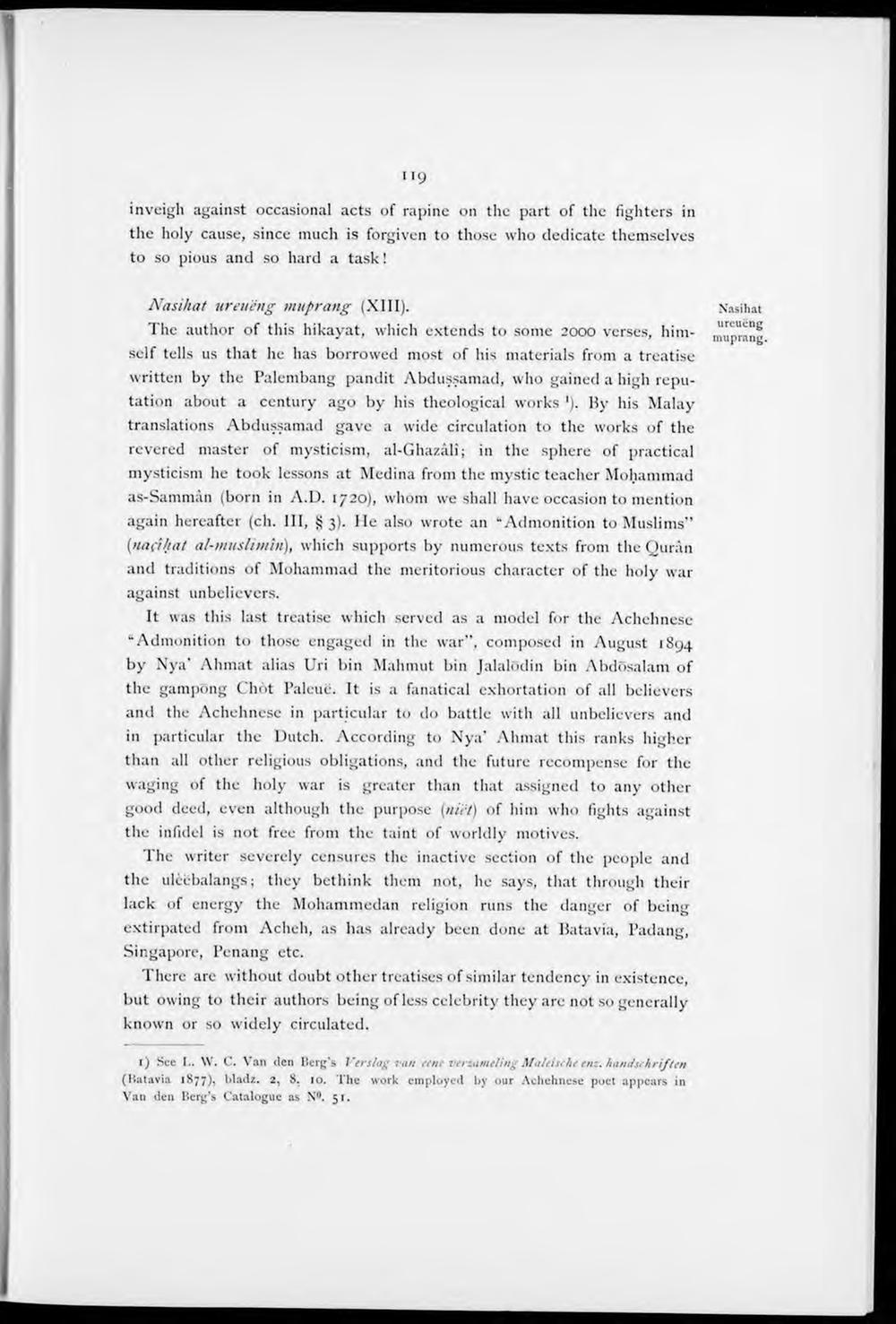 inveigh against occasional acts of rapine on the part of the fighters in the holy cause, since much is forgiven to those who dedicate themselvcs to so pious and so hard a task!

The author of this hikayat, which extends to some 2000 verses, him- Sprang self tells us that he has borrowed most of his materials from a treatise written by the Palembang pandit Abdussamad, who gained a high reputation about a century ago by his theological works '). By his Malay translations Abdussamad gave a wide circulation to the works of the revered master of mysticism, al-Ghazali; in the sphere of practical mysticism he took lessons at Medina from the mystic teacher Mohammad as-Samman (born in A.D. 1720), whom we shall have occasion to mention again hereafter (ch. III, § 3). He also wrote an "Admonition to Muslims"

(nafi/iat al-muslimin), which supports by numerous texts from the Quran and traditions of Mohammad the meritorious character of the holy war against unbelievers.

It was this last treatise which served as a model for the Achchnese "Admonition to those engaged in the war", composed in August 1894 by Nya' Ahmat alias Uri bin Mahmut bin Jalalödin bin Abdösalam of the gampöng Chót Paleuë. It is a fanatical exhortation of all believers and the Achehnese in particular to do battle with all unbelievers and in particular the Dutch. According to Nya' Ahmat this ranks higher than all other religious obligations, and the future recompense for the waging of the holy war is greater than that assigned to any other good deed, even although the purpose {niet) of him who fights against the infidel is not free from the taint of worldly motives.

The writer severely censures the inactive section of the people and the ulèëbalangs; they bethink them not, he says, that through their lack of energy the Mohammedan religion runs the danger of being extirpated from Acheh, as has already been done at Batavia, Padang, Singapore, Penang etc.

There are without doubt other treatises ofsimilar tendency in existence, but owing to their authors being of less celebrity they are not so generally known or so widely circulated.