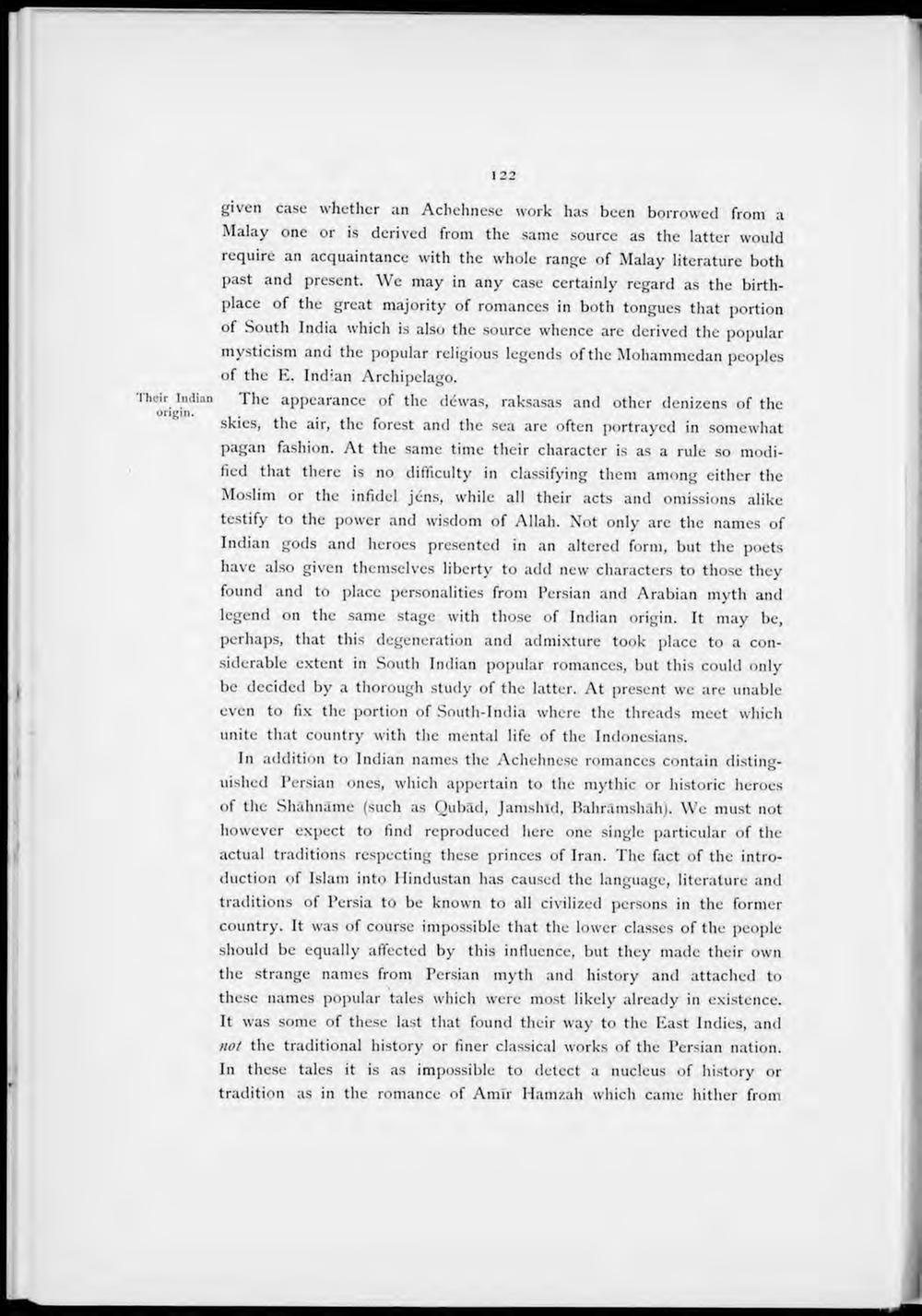 given case whether an Achehnese work has been borrowed from a Malay one or is derived from the same source as the latter vvould require an acquaintance with the whole range of Malay literature both past and present. We may in any case certainly regard as the birthplace of the great majority of romances in both tongues that portion of South India which is also the source whence are derived the popular mysticism and the popular religious legcnds of the Mohammedan peoples of the E. Indian Archipelago.

Their Indian The appearance of the déwas, raksasas and other denizens of the ongm.

skies, the air, the forest and the sea are often portrayed in somewhat pagan fashion. At the same time their character is as a rule so modified that there is no difficulty in classifying them among either the Moslim or the infidel jéns, while all their acts and omissions alike testify to the power and wisdom of Allah. Not only are the names of Indian gods and heroes presented in an altered form, but the poets have also given themselves liberty to add new characters to those they found and to place personalities from Persian and Arabian myth and legend on the same stage with those of Indian origin. It may be, perhaps, that this degeneration and admixture took place to a considerable extent in South Indian popular romances, but this could only be dccided by a thorough study of the latter. At present we are unable even to fix the portion of South-India where the threads meet which unite that country with the mental life of the Indonesians.

In addition to Indian names the Achehnese romances contain distinguished Persian ones, which appertain to the mythic or historie heroes of the Shahname (such as Qubad, Jamshid, Bahramshah). We must not however expect to find reproduced liere one single particular of the actual traditions respecting these princes of Iran. The fact of the introduction of Islam into Hindustan has caused the language, literature and traditions of Persia to be known to all civilized persons in the former country. It was of course impossible that the lower classes of the people should be equally affected by this influence, but they made their own the strange names from Persian myth and history and attached to these names popular tales which were most likely already in existence. It was some of these last that found their way to the East Indies, and not the traditional history or finer classical works of the Persian nation. In these tales it is as impossible to detect a nucleus of history or tradition as in the romance of Amlr Hamzah which came hither from