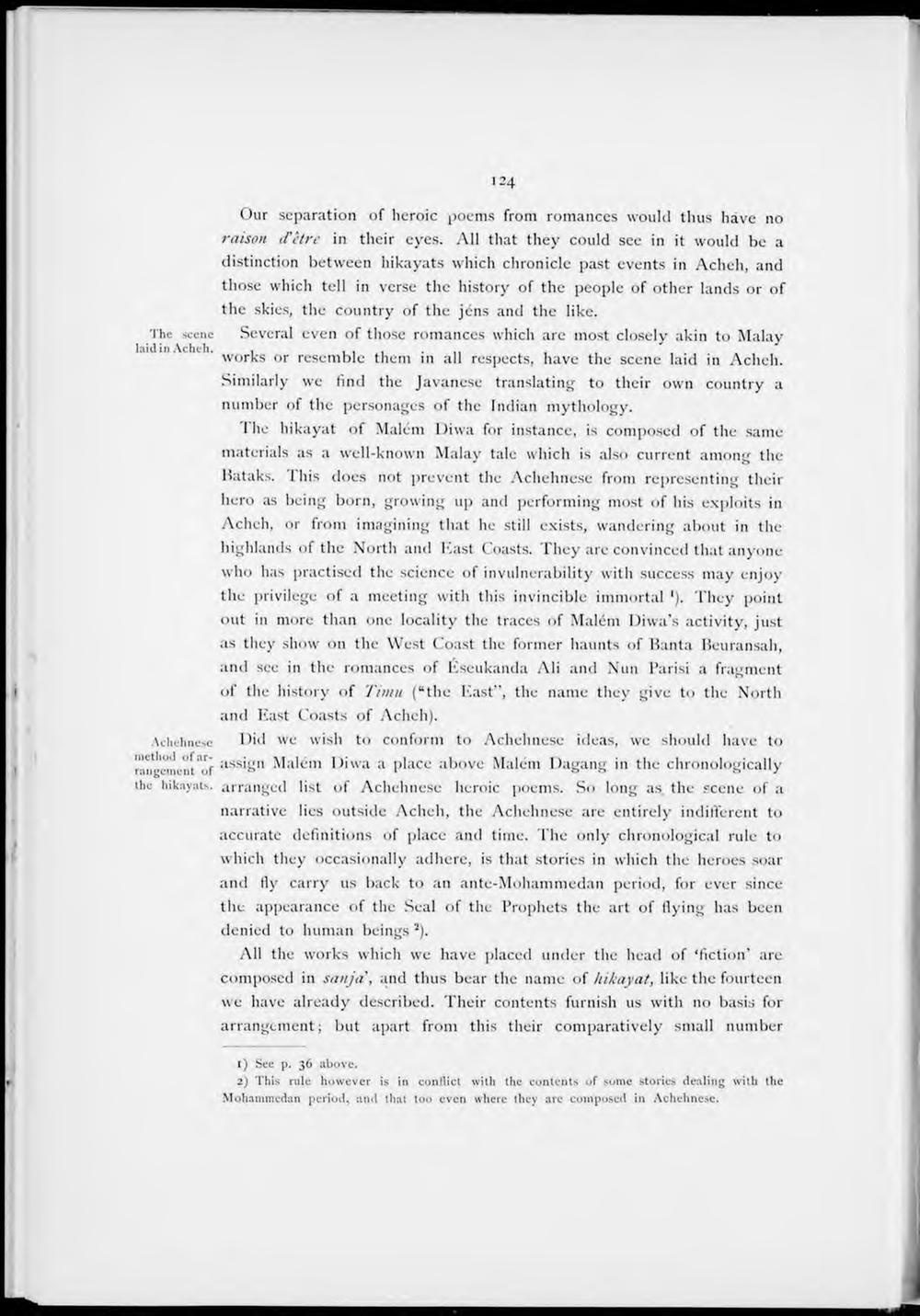 Our separation of heroic poems from romances would thus have no raison (Têtre in their eyes. All that they could see in it would be a distinction between hikayats which chronicle past events in Acheh, and those which teil in verse the history of the people of other lands or of the skies, the country of the jéns and the like.

works or rescmblc them in all respects, have the scene laid in Acheh. Similarly we find the Javanese translating to their own country a number of the personages of the Indian mythology.

The hikayat of Malém Diwa for instance, is composed of the same materials as a well-known Malay tale which is also current among the Bataks. I his does not prevent the Achehnese from representing their hero as being born, growing up and performing most of his exploits in Acheh, or from imagining that he still exists, wandering about in the highlands of the North and Kast Coasts. They are convinced that anyone who lias practised the science of invulnerability with success may enjoy the privilege of a meeting with this invincible immortal '). They point out in more than one locality the tracés of Malém Diwa's activity, just as they show on the West Coast the former haunts of Banta Beuransah, and see in the romances of Eseukanda Ali and Nun Parisi a fragment of the history of Timu ("the Kast", the name they give to the North and East Coasts of Acheh).

Achehnese l)icl we wisli to conform to Achehnese ideas, we should have to rangenlent"óf ass'&n Malém Diwa a place above Malém Dagang in the chronologically the hikayats. arranged list of Achehnese heroic poems. So long as the scene of a narrative lies outside Acheh, the Achehnese are entirely indifferent to accurate definitions of place and time. The only chronological rule to which they occasionally adhere, is that stories in which the heroes soar and fly carry us back to an ante-Mohammedan period, for ever since the appearance of the Seal of the Prophets the art of flying lias been denied to human beings 2).

All the works which we have placed under the liead of 'fiction' are composed in sanja , and thus bear the name of hikayat, like the fourteen we have already described. Their contents furnish us with 110 basis for arrangement; but apart from this their comparatively small number

2) This rule however is in conflict with the contents of some stories dealing with the Mohammcdan period, and that too even wheie they are composed in Achehnese.