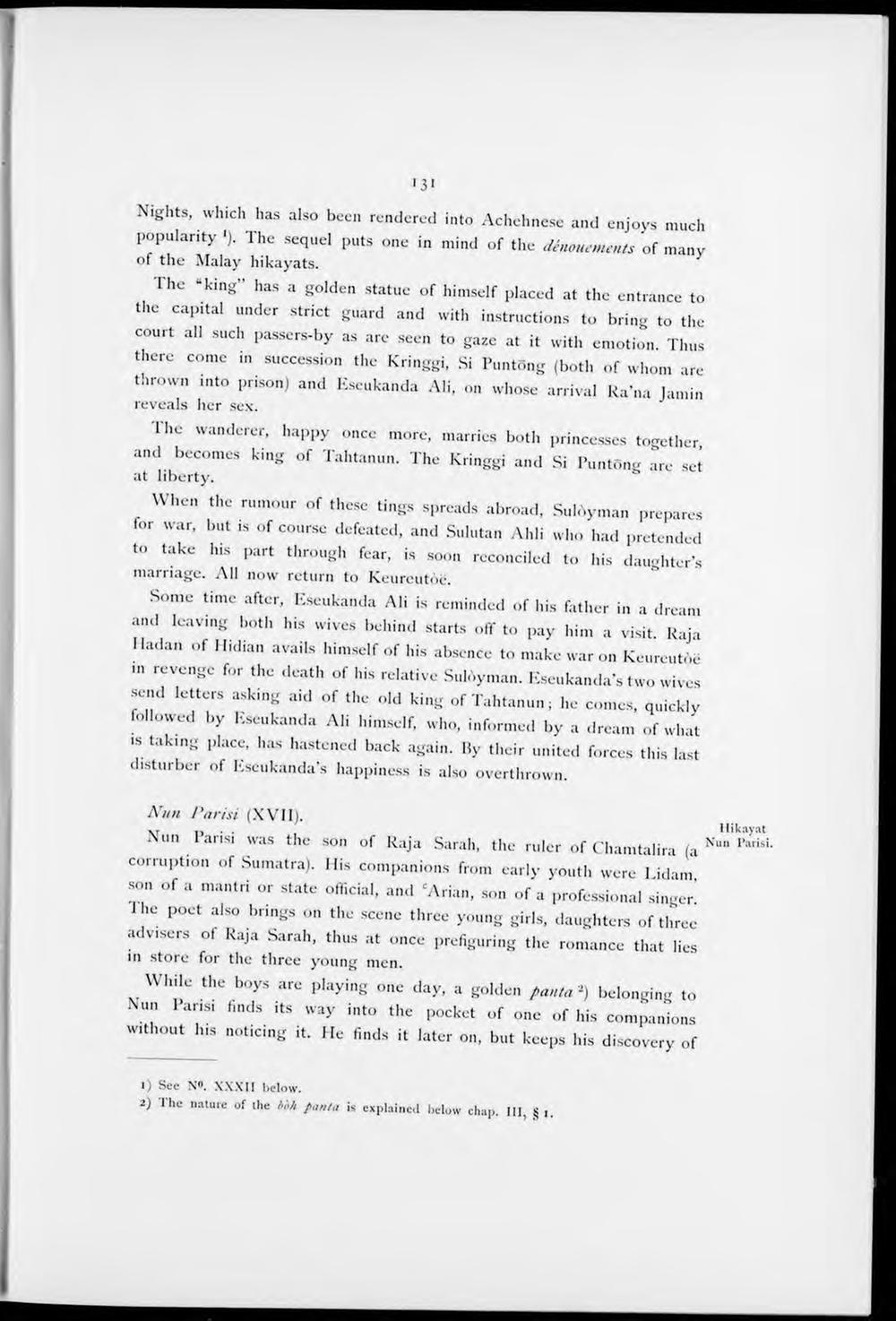 Nights, whicli lias also been rendered into Achehnese and enjoys much

populanty '). The sequel puts one in mind of the dénouements of many of the Malay hikayats.

the capita! under strict guard and with instructions to bring to the

court all sucl, passers-by as are seen to gaze at it with emotion. Thus

there come m succession the Kringgi, Si Puntöng (botl, of whom are

Ihe wanderer, happy once more, marries both princesses together,

and becomes king of Tahtanun. The Kringgi and Si Puntöng are set at liberty. ö

Wild the rumour of these tings spreads abroad, Suloyman prepares for war, hut is of course defeated, and Sulutan Ahli who had pretended to take lus part through fear, is soon reconciled to his daughter's marriage. All now return to Keureutöë.

Some time after, Eseukanda Ali is reminded of his father in a dream and leaving both his wives behind starts off to pay him a visit Raja Hadan of Hidian avails himself of his absence to make war on Keureutöë m revenge for the death of his relative Suloyman. Eseukanda's two wives send letters asking aid of the old king of Tahtanun; he comes, quickly folio wed by Eseukanda Ali himself, who, informed by a dream of what is taking place, has hastened back again. By tlieir united forces this last disturber of Eseukanda's happiness is also overthrown.

Nun Pansi was the son of Raja Sarah, the ruler of Chamtalira (a Nun Pa>iisi-

corruption of Sumatra). His companions from early youth were Lidam

son of a mantri or state official, and 'Arian, son of a professional singer'

I he poet also brings on the scene three young girls, daughters of three

adv.sers of Raja Sarah, thus at once prefiguring the romance that lies 111 store for the three young men.

While the boys are playing one day, a golden panta-) belonging to Nun Pansi finds ,ts way into the pocket of one of his companions Without lus noticing it. He finds it later on, but keeps his discovery of