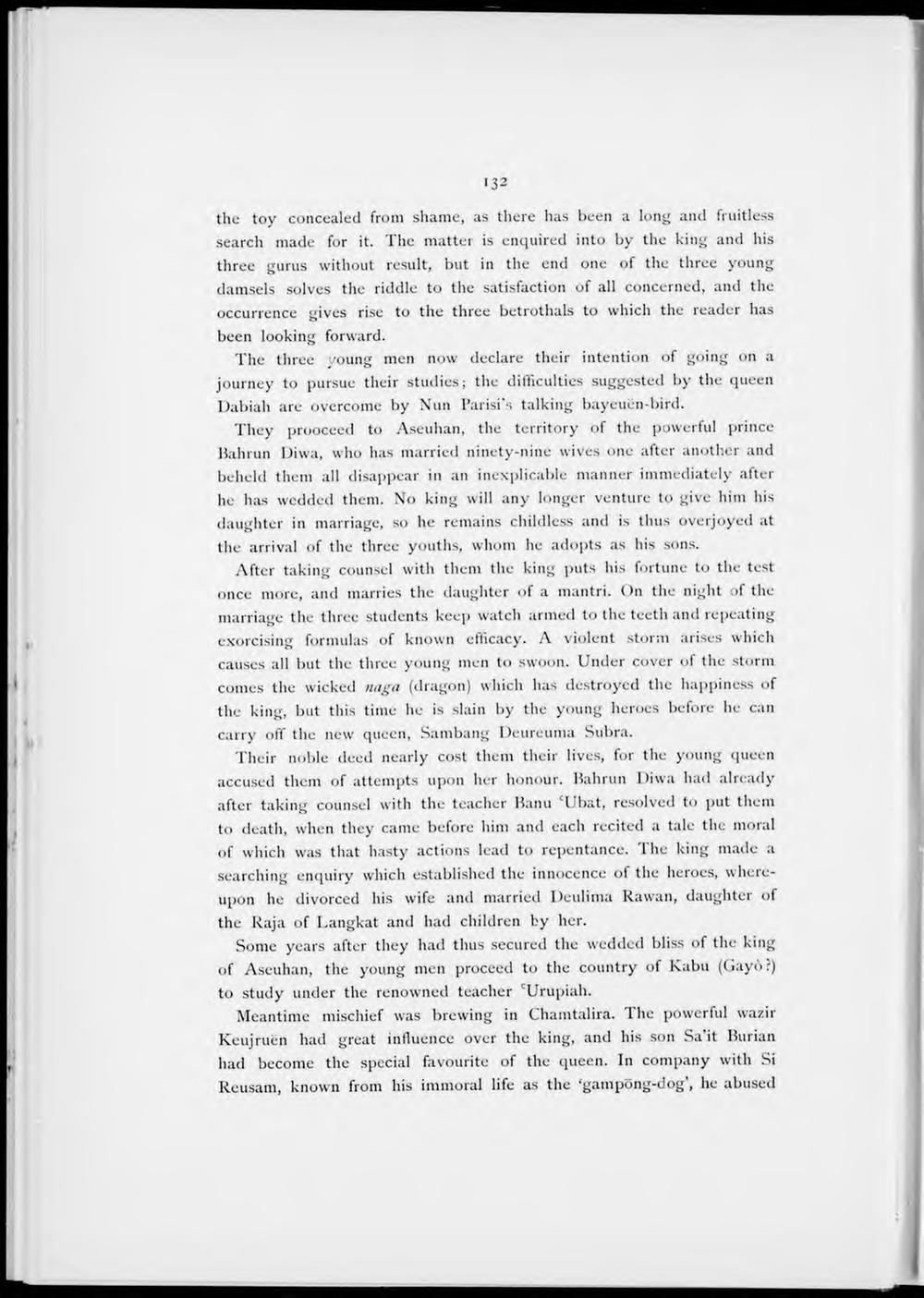 the toy concealed from shame, as there has been a long and fruitless search made for it. The matter is enquired into by the king and his three gurus without result, but in the end one of the three young damsels solves the riddle to the satisfaction of all concerned, and the occurrence gives rise to the three betrothals to which the reader has been looking forward.

The three young men now declare their intention of going on a journey to pursue their studies; the difficulties suggested by the queen Dabiah are overcome by Nun Parisi's talking bayeuën-bird.

They prooceed to Aseuhan, the territory of the powerful prince Bahrun Diwa, who has married ninety-nine wives one after another and beheld them all disappear in an inexplicable manner immediately after he has wedded them. No king will any longer venture to give him his daughter in marriage, so he remains childless and is thus overjoyed at the arrival of the three youths, whom he adopts as his sons.

After taking counsel with them the king puts his fortune to the test once more, and marries the daughter of a mantri. On the night of the marriage the three students keep watch armed to the teeth and repeating exorcising formulas of known efficacy. A violent storm arises which causes all but the three young men to svvoon. Under cover of the storm comes the wicked naga (dragon) which has destroycd the happiness of the king, but this time he is slain by the young heroes before he can carry off the new queen, Sambang Deureuma Subra.

Their noble deed nearly cost them their lives, for the young queen accused them of attempts upon her honour. Bahrun Diwa had already after taking counsel with the teacher Banu cUbat, resolved to put them to death, vvhen they came before him and each recited a tale the moral of which was that hasty actions lead to repentance. The king made a searching enquiry which established the innocence of the heroes, whereupon he divorced his wife and married Deulima Rawan, daughter of the Raja of Langkat and had children by her.

Some years after they had thus secured the wedded bliss of the king of Aseuhan, the young men proceed to the country of Kabu (Gayó r) to study under the renowned teacher cUrupiah.

Meantime mischief was brewing in Chamtalira. The powerful wazir Keujruën had great influence over the king, and his son Sa'it Burian had become the special favourite of the queen. In company with Si Reusam, known from his immoral life as the 'gampöng-dog', he abused