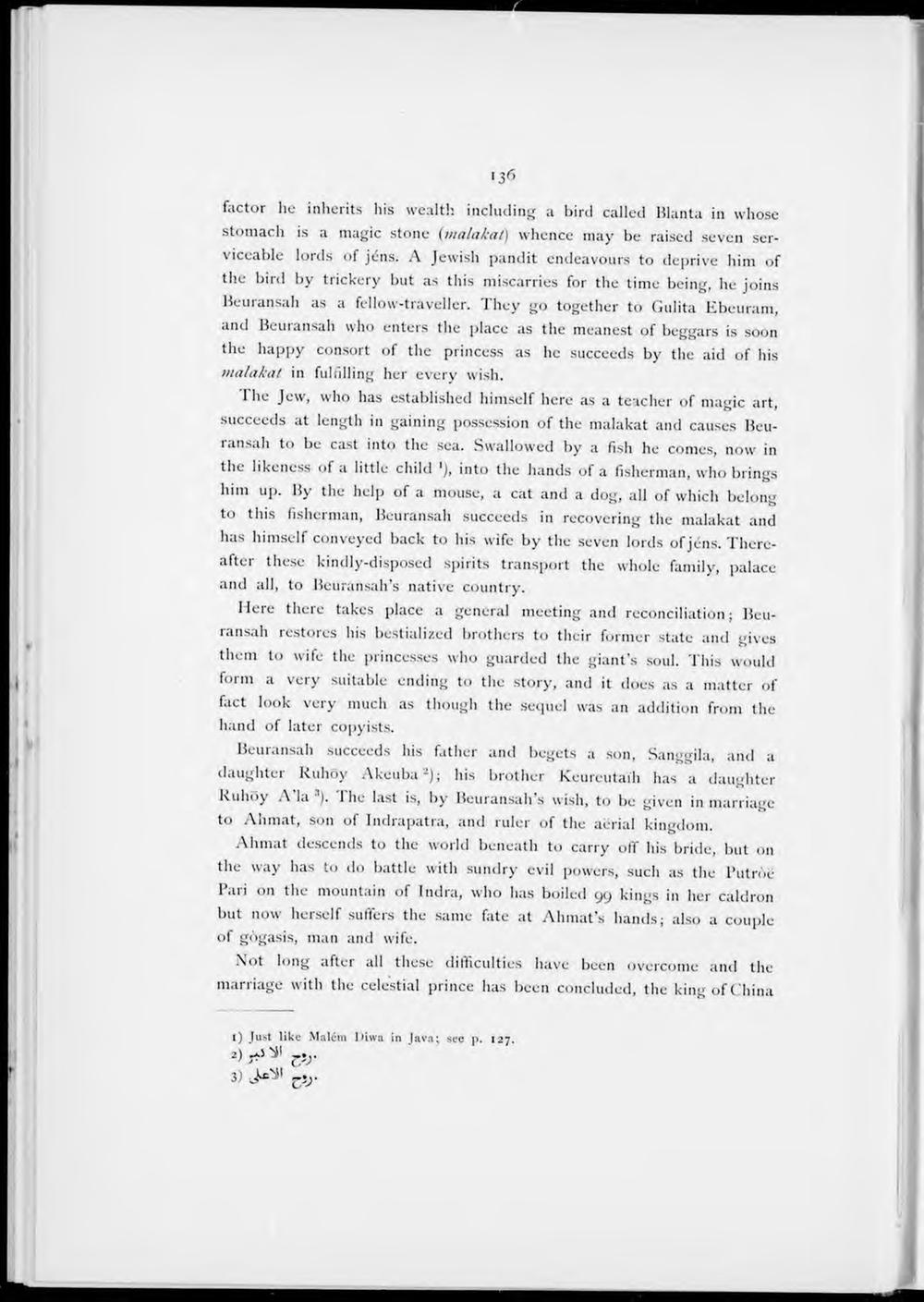 factor he inherits liis wealth including a bird called Blanta in whose stomach is a magie stone (malakat) whence may be raised seven serviccable lords of jens. A Jewish pandit endeavours to deprive him of the biid by triekery but as tliis miscarries for the time being, he joins Beuransah as a fellow-traveller. They go together to Gulita Ebeuram, and Beuransah who enters the place as the meanest of beggars is soon the happy consort of the princess as he succeeds by the aid of his malakat in fulnlling her every wish.

1 he Jew, who has established hiniself here as a teacher of magie art, succeeds at length in gaining possession of the malakat and causes Beuransah to be cast into the sea. Swallowed by a fish he comes, now in the likeness of a little child into the hands of a fisherman, who briners

him up. By the help of a mouse, a cat and a dog, all of which belong to this fisherman, Beuransah succeeds in recovering the malakat and has himself conveyed back to his wife by the seven lords of jéns. Thereafter these kindly-disposed spirits transport the whole family, palace and all, to Beuransah's native country.

Here there takes place a general meeting and reconciliation; Beuransah restores his bestialized brothers to their former state and gives them to wife the princesses who guarded the giant's soul. This would form a very suitable ending to the story, and it does as a matter of fact look very much as thougli the sequel was an addition from the hand of later copyists.

Beuransah succeeds lus father and begets a son, Sangi^ila, and a daughter Ruhoy Akeuba2); his brother Keureutaïh has a daughter Ruhoy A la ). I he last is, by Beuransah s wish, to be given in marriage to Ahmat, son of Indrapatra, and ruler of the aërial kingdom.

Ah mat descends to the world beneath to carry off his bride, but 011 the way has to do battle with sundry evil powers, such as the Putróë 1 aii on the mountain of Indra, who has boiled 99 kings in her caldron but now herself suffers the same fate at Ahmat's hands; also a couple of gogasis, man and wife.

Not long after all these difficulties have been overcome and the marriage with the celestial prince has been concluded, the king of China