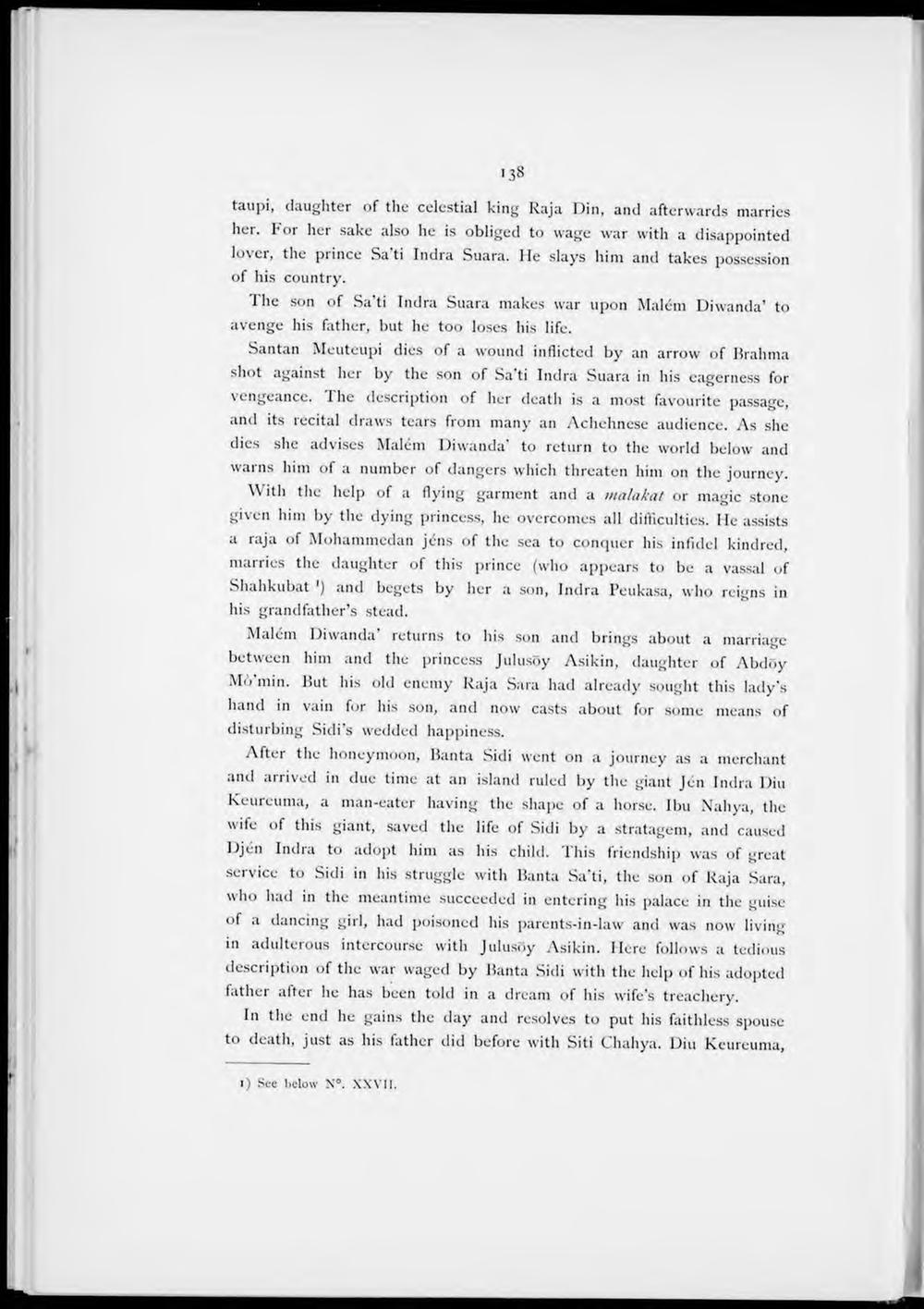 taupi, daughter of the celestial king Raja Din, and afterwards marries htr. 1 or her sake also he is obliged to wage war with a disappointed lover, the prince Sa ti Indra Suara. He slays him and takes possession of his country.

1 he son of Sa ti Indra Suara makes war upon Malém Diwanda' to avenge his father, but he too loses his life.

Santan Meuteupi dies of a wound inflicted by an arrow of Brahma shot against lier by the son of Sa'ti Indra Suara in his eagerness for vengeance. The description of her death is a most favourite passage, and its recital draws tears from many an Achehnese audience. As she dies she advises Malém Diwanda' to return to the world below and warns him of a number of dangers which threaten him on the journcy.

With the help of a flying garment and a malakat or magie stone given him by the dying princess, he overcomes all difficulties. He assists a raja of Mohammedan jéns of the sea to conquer his infidel kindred, marries the daughter of this prince (who appears to be a vassal of Shahkubat ') and begets by her a son, Indra Peukasa, who reigns in his grandfather's stead.

Malém Diwanda returns to his son and brings about a marriage between him and the princess Julusöy Asikin, daughter of Abdoy Mó'min. But his old enemy Raja Sara had already sought this lady's hand in vain for his son, and now casts about for some means of disturbing Sidi's wedded happiness.

After the honeymoon, Banta Sidi went on a journey as a merchant anti arrived in due time at an island ruled by the giant Jen Indra Diu Keureuma, a man-eater having the shape of a horse. Ibu Nahya, the wife of this giant, saved the life of Sidi by a stratagem, and caused Dj én Indra to adopt him as his child. I his friendship was of great service to Sidi in his struggle with Banta Sa'ti, the son of Raja Sara, who had in the meantime succeeded in entering his palace in the guise of a dancing girl, had poisoned his parents-in-law and was now living in adulterous intercourse with Julusöy Asikin. Here follows a tedious description of the war waged by Banta Sidi with the help of his adopted father after he lias been told in a dream of his wife's treachery.

In the end he gains the day and resolves to put his faithless spouse to death, just as his father did before with Siti Chaliya. Diu Keureuma,