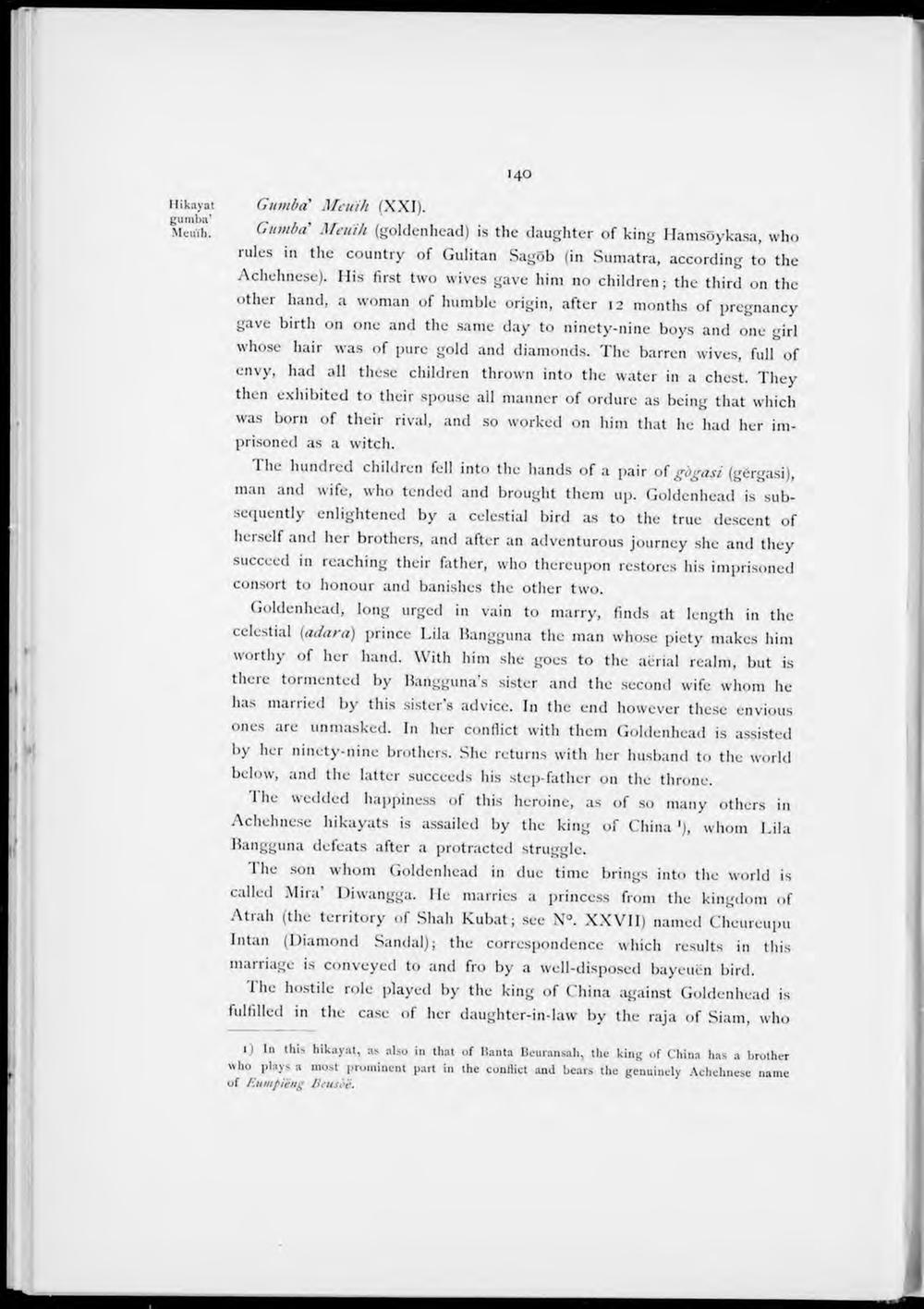 Meuïh. Gumba Meuïh (goldenhead) is the daughter of king Hamsöykasa, who rules in the country of Gulitan Sagöb (in Sumatra, according to the Achehnese). His first two wives gave him no children; the third on the other hand, a woman of humble origin, after 12 months of pregnancy gave bit th on one and the same day to ninety-nine boys and one girl whose liair was of pure gold and diamonds. The barren wives, full of envy, had all these children thrown into the water in a chest. They then exhibited to their spouse all manner of ordure as being that which was born of their rival, and so worked on him that he had her imprisoned as a witch.

1 he hundred children feil into the hands of a pair of gogasi (gërgasi), man and wife, who tended and brought them up. Goldenhead is subsequently enlightened by a celestial bird as to the true descent of lierself and her brothers, and after an adventurous journey she and they succeed in reaching their father, who thereupon restores his imprisoned consort to honour and banishes the other two.

Goldenhead, long urged in vain to marry, finds at length in the celestial (adara) prince Lila Bangguna the man whose piety makes him worthy of her hand. With him she goes to the aerial realm, but is tliere tormented by Bangguna's sister and the second wife whom he has married by tliis sister's advice. In the end however these envious ones are unmasked. I11 her conflict with them Goldenhead is assisted by her ninety-nine brothers. She returns with her husband to the world below, and the latter succeeds his step-father 011 the tlirone.

1 he wedded happiness of tliis heroine, as of so many others in Achehnese liikayats is assailed by the king of China '), whom Lila Bangguna defeats after a protracted struggle.

I he son whom Goldenhead in due time brings into the world is called Mira Diwangga. He marries a princess from the kingdom of Atrah (the territory of Shah Kubat; see N°. XXVII) named Cheureupu Intan (Diamond Sandal); the correspondence which results in tliis marriage is conveyed to and fro by a well-disposed bayeuën bird.

The hostile role played by the king of China against Goldenhead is fulfilled in the case of her daughter-in-law by the raja of Siam, who

1) In this hikayat, as also in that of lianta Beuransah, the king of China has a brother who playsa most prominent part in the conflict and beats the genuinely Achehnese name