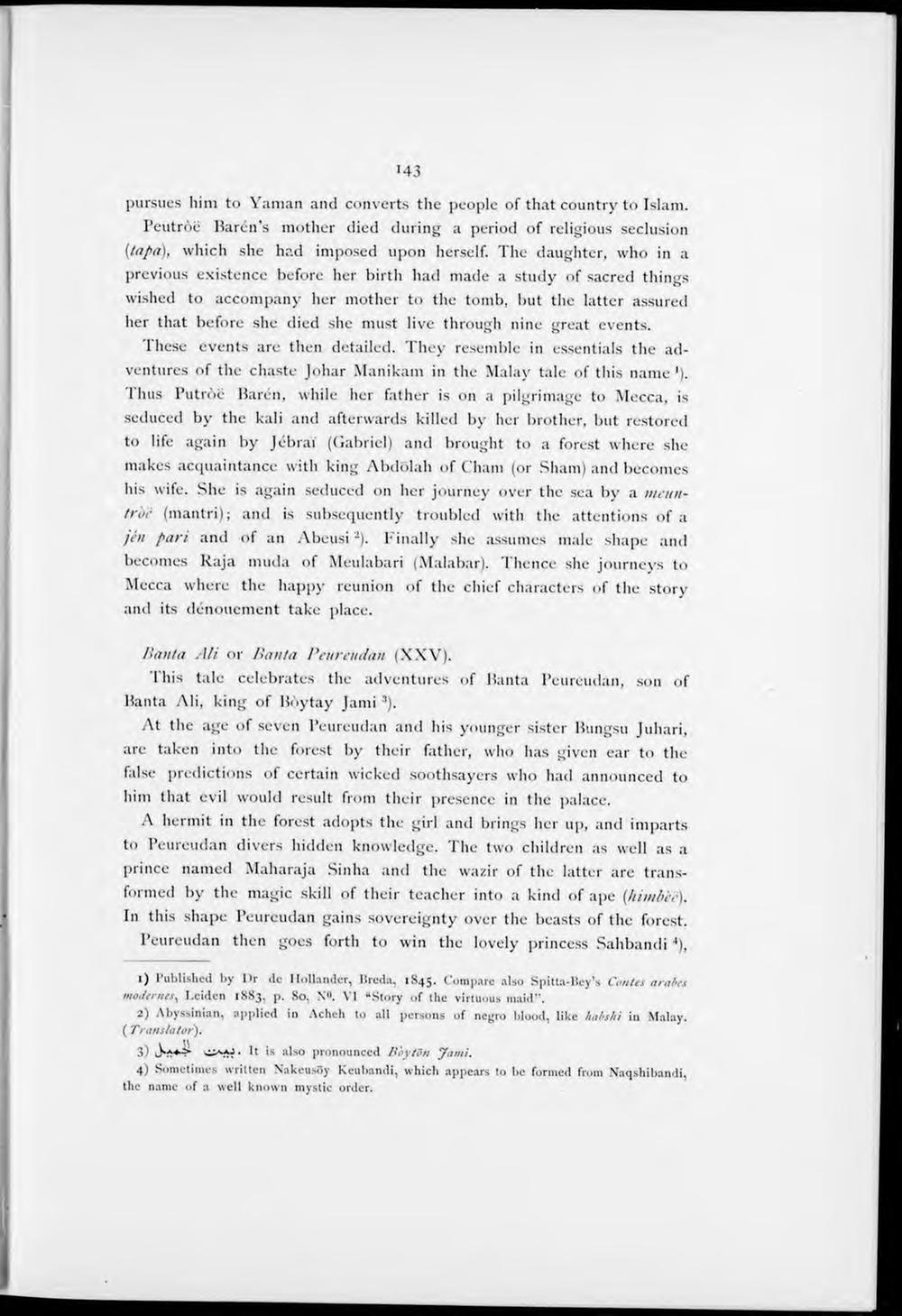 pursues him to Yaman and converts the peoplc of that country to Islam.

Peutröë Barén's mother died during a period of religious seclusion [tapa), which she had imposed upon herself. The daughter, who in a previous existence before her birth had made a study of sacred things wished to accompany her mother to the tomb, but the latter assured her that before she died she must live through nine great events.

1 hese events are then detailed. They resemble in essentials the adventures of the chaste Johar Manikam in the Malay tale of this name '). I hus Putróë Barén, while her father is on a pilgrimage to Mecca, is seduced by the kali and afterwards killed by her brother, but restored to life again by Jébraï (Gabricl) and brought to a forest where she makes acquaintance with king Abdolah of Cham (or Sham) and becomes his wife. She is again seduced on her journey over the sea by a motntrbë (mantri); and is subsequently troubled with the attentions of a jên pari and of an Abeusi2). Finally she assumes male shape and becomes Raja muda of Meulabari (Malabar). Thence she journeys to Mecca where the happy reunion of the chief characters of the story and its dénouement take place.

This tale celebrates the adventures of Banta Peureudan, son of Banta Ali, king of Bóytay Jami •1).

At the age of seven Peureudan and his younger sister Bungsu Juhari, are taken into the forest by their father, who has given ear to the fel se predictions of certain wicked soothsayers who had announced to him that evil would result from their presence in the palace.

A hermit in the forest adopts the girl and brings her up, and imparts to Peureudan divers hidden knowledge. The two children as well as a prince named Maharaja Sinha and the wazir of the latter are transformed by the magie skill of their teacher into a kind of ape (himbèë). In this shape Peureudan gains sovereignty over the beasts of the forest.

Peureudan then gocs forth to win the lovely princess Sahbandi4),

2) Abyssinian, applied in Acheh to all persons of negro blood, like habshi in Malay. ( Translator).

4) Sometimes written Nakeusöy Keubandi, which appears to be formed from Naqshibandi, the name uf a well known mystic order.