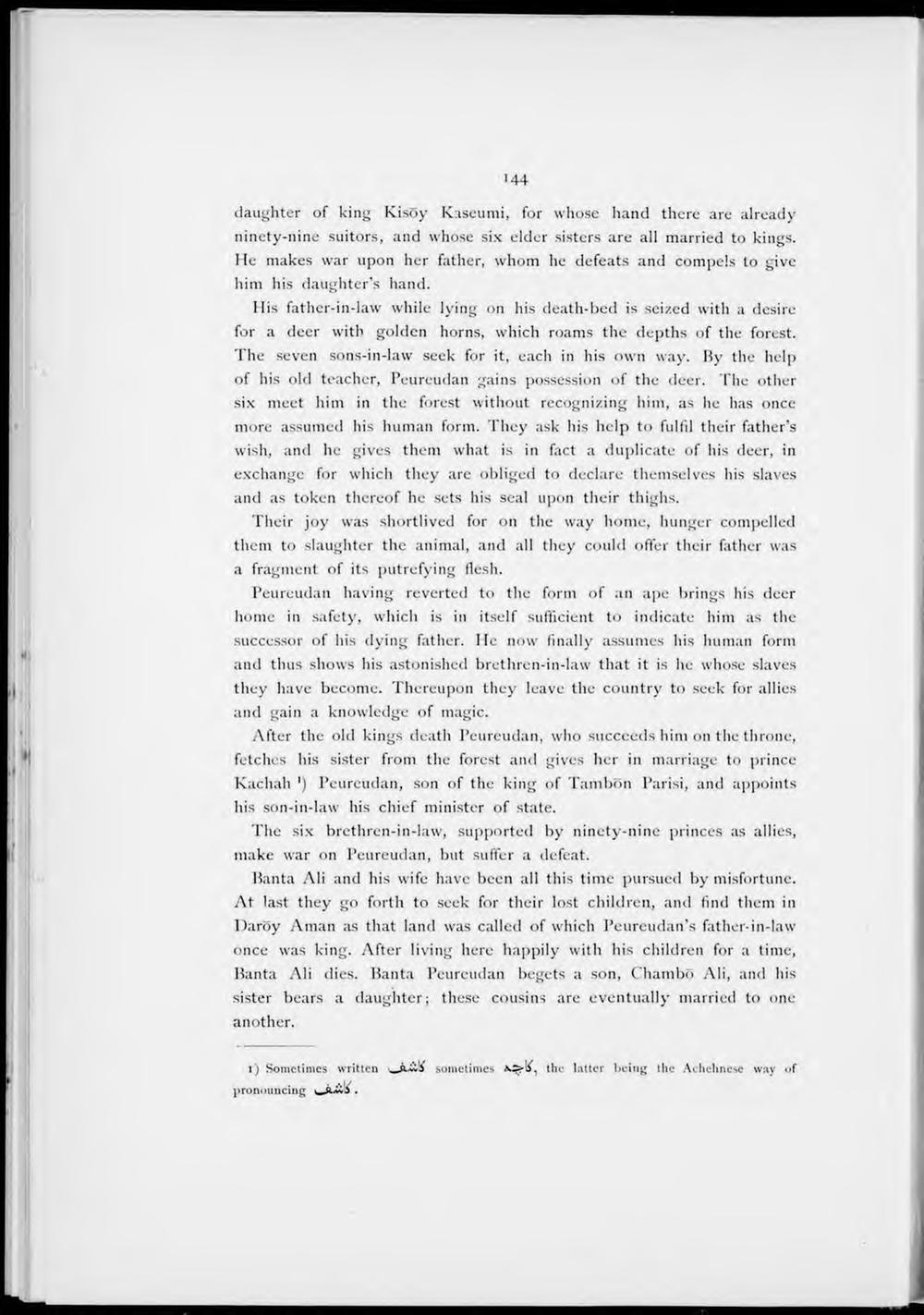 daughter of king Kisöy Kaseumi, for vvhose hand there are already ninety-nine suitors, and whose six elder sisters are all married to kings. He makes war upon her father, whom he defeats and compeis to give him his daughter's hand.

His father-in-law while lying on his death-bed is seized with a desire for a deer with golden horns, which roams the depths of the forest. The seven sons-in-law seek for it, each in his own way. By the help of his old teacher, Peureudan gains possession of the deer. The other six meet him in the forest without recognizing him, as he lias once more assumed his human form. They ask his help to fulfil their father's wish, and he gives them what is in fact a duplicate of his deer, in exchange for which they are obliged to declare themselves his slaves and as token thereof he sets his seal upon their thighs.

Their joy was shortlived for on the way home, hunger compelled them to slaughter the animal, and all they could offer their father was a fragment of its putrefying flesh.

Peureudan having reverted to the form of an ape brings his deer home in safety, which is in itself sufficiënt to indicate him as the successor of his dying father. He now finally assumes his human form and thus shows his astonished brethren-in-law that it is he whose slaves they have become. Thereupon they leave the country to seek for allies and gain a knowledge of magie.

After the old kings death Peureudan, who succeeds him on the throne, fetches his sister from the forest and gives her in marriage to prince Kachah ') Peureudan, son of the king of Tambön Parisi, and appoints his son-in-law his chief minister of state.

The six brethren-in-law, supported by ninety-nine princes as allies, make war on Peureudan, but suffer a defeat.

Banta Ali and his wife have been all this time pursued by misfortune. At 'ast they go forth to seek for their lost children, and find them in Daroy Aman as that land was called of which Peureudan's father-in-law once was king. After living liere happily with his children for a time, Banta Ali dies. Banta Peureudan begets a son, Chambö Ali, and his sister bears a daughter; these cousins are eventually married to one another.

i) Somctimes written sometimes the latter being the Achehnese way of