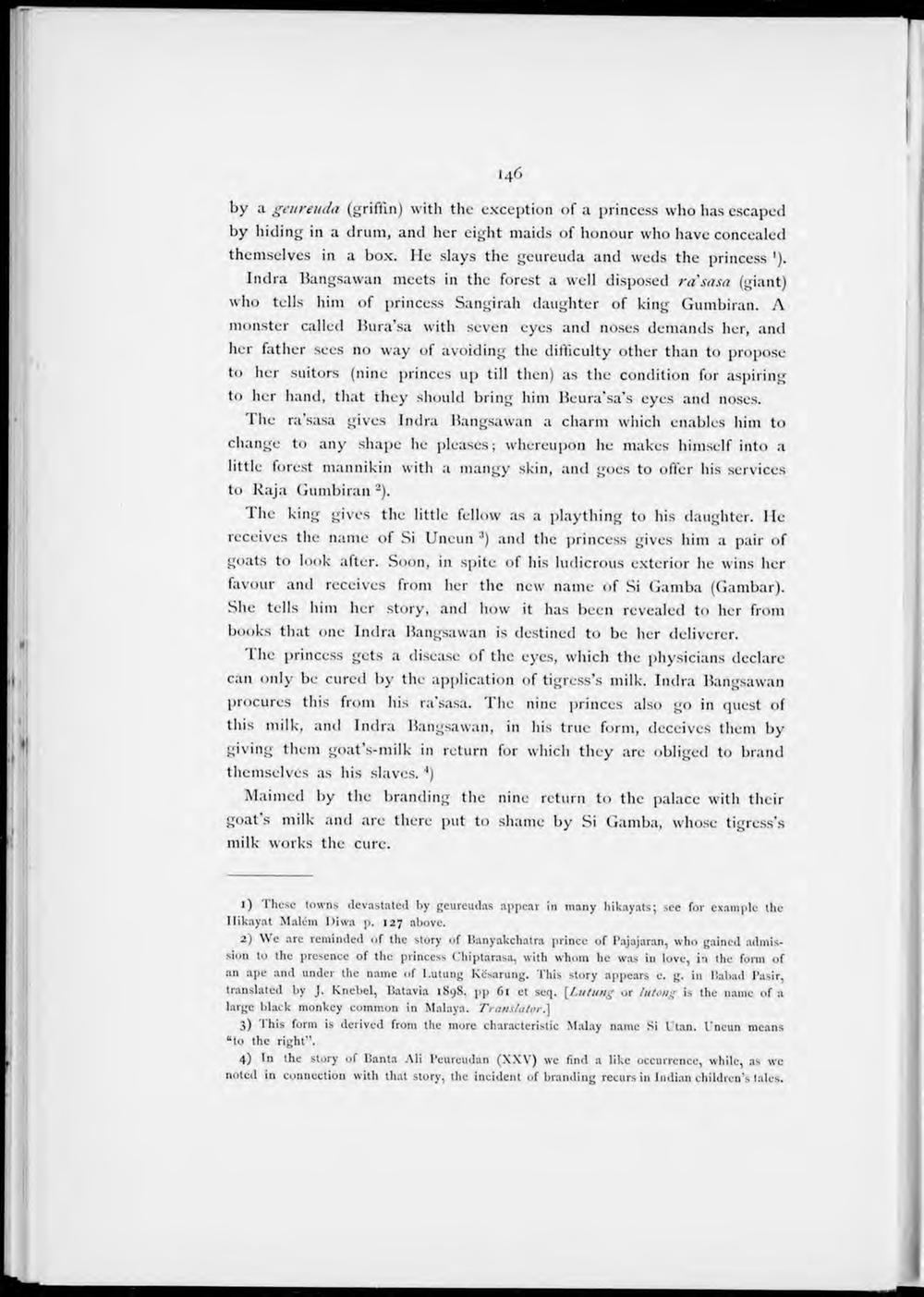 by a geureuda (griffin) with the exception of a princess who has escaped by hiding in a drum, and her eight maids of honour who have concealed themselves in a box. He slays the geureuda and weds the princess ').

Indra Bangsawan meets in the forest a well disposed ra'sasa (giant) who tells him of princess Sangirah daughter of king Gumbiran. A monster called Bura'sa with seven eyes and noses dernands her, and her father secs no way of avoiding the difficulty other than to propose to lier suitors (nine princes up till then) as the condition for aspiring to her hand, that they should bring him Beura'sa's eyes and noses.

rhc ra'sasa gives Indra Bangsawan a charm which enables him to change to any shape he pleases; whereupon he makes himself into a little forest mannikin with a mangy skin, and goes to offer his services to Raja Gumbiran 2).

Die king gives the little fellow as a plaything to his daughter. He receives the name of Si Uneun 3) and the princess gives him a pair of goats to look after. Soon, in spite of his ludicrous exterior he wins her favour and receives from her the new name of Si Gamba (Gambar). She tells h im her story, and how it has been revealed to her from books that one Indra Bangsawan is destined to be her deliverer.

1 he princess gets a discase of the eyes, which the physicians declare can only be cured by the application of tigress's milk. Indra Bangsawan procures this from his ra'sasa. '1 he nine princes also go in quest of this milk, and Indra Bangsawan, in his true form, deceives them by giving them goat's-milk in return for which they are obliged to brand themselves as his slaves.4)

Maimed by the branding the nine return to the palace with their goat s milk and are there put to shame by Si Gamba, whose tigress's milk works the cure.

2) We are reminded of the story of Banyakchatra princc of Pajajaran, who gaincd admission to the presence of the princess Chiptarasa, with whom he was in love, in the form of an ape and under the name of Lutung Kesarung. This story appears e. g. in P»abad Pasir, translated by J. Knebel, Batavia 1898, pp 61 et seq. [Lutung or lutong is the name of a large black monkey common in Malaya. Translater.]

4) In the story of Banta Ali Peureudan (XXV) wc find a like occurrence, while, as we noted in conncction with that story, the incident of branding recurs in Indian children's talcs.