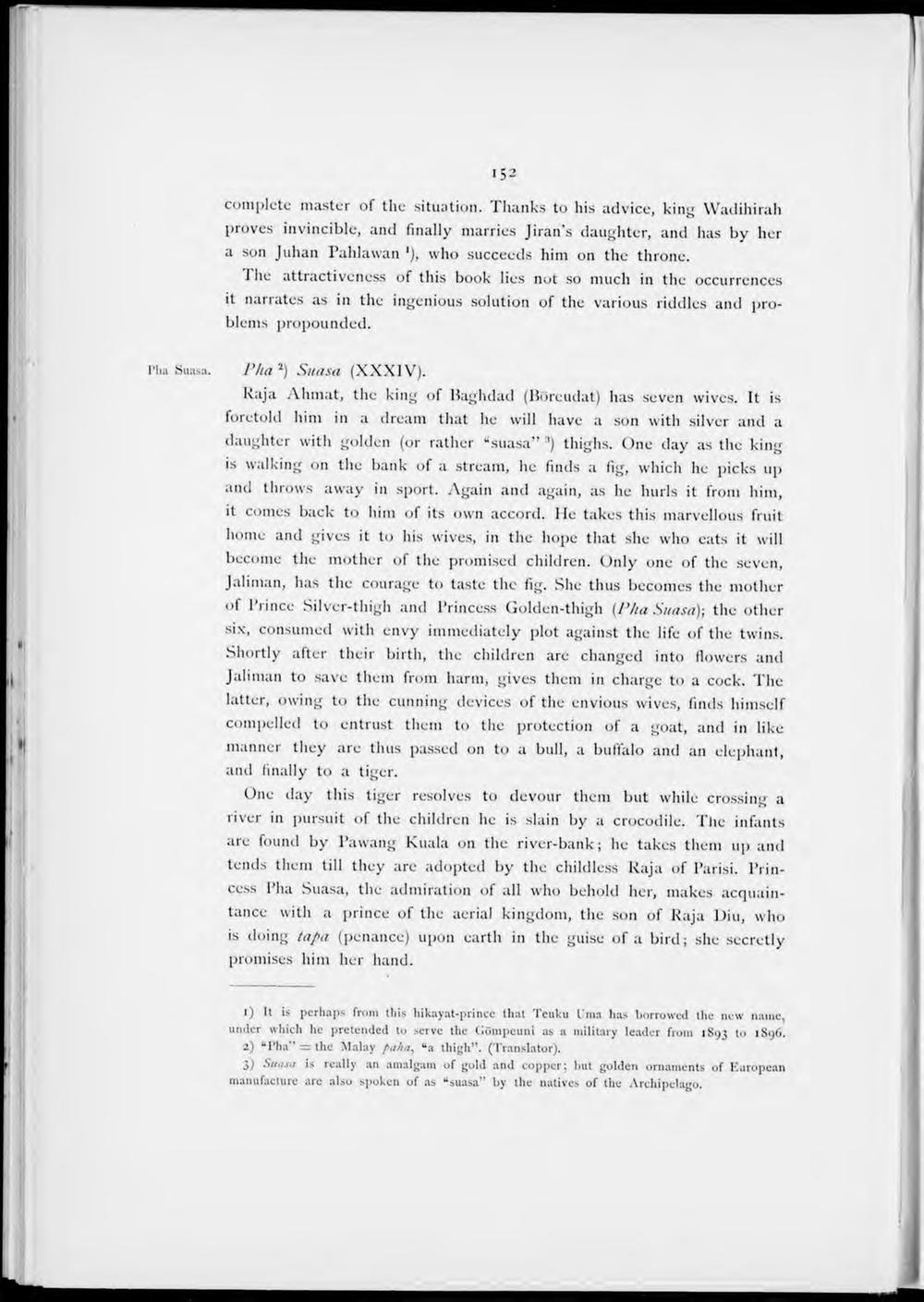 complete master of the situation. Thanks to his advice, king Wadihirah proves invincible, and finally marries Jiran's daughter, and lias by her a son Juhan Pahlawan '), who succecds him on the throne.

1 he attractiveness of tliis book lies not so much in the occurrences it narrates as in the ingenious solution of the various riddles and problems propounded.

Raja Ahmat, the king of Baghdad (Böreudat) lias seven wives. It is foretold him in a dream that he will have a son with silver and a daughter with golden (or rather "suasa" 3) thighs. One day as the king is walking 011 the bank of a stream, he finds a fig, which he picks up and throws away in sport. Again and again, as he hurls it from him, it comes back to him of its own accord. He takes this marvellous fruit home and gives it to his wives, in the hope that she who eats it will beconie the mother of the promised children. (Jnly one of the seven, Jaliman, has the courage to taste the fig. She thus becomes the mother of liince Silver-thigh and 1'rincess Golden-thigh (Pha Suasa)', the other six, consumed with envy immediately plot against the life of the twins. Shortly after their birth, the children are changed into flowers and Jaliman to save them from harm, gives them in charge to a cock. The latter, owing to the cunning devices of the envious wives, finds himself compelled to entrust them to the protection of a goat, and in like manner they are thus passed 011 to a buil, a buffalo and an elephant, and (inally to a tiger.

One day this tiger resolves to devour them but wliile crossing a river in pursuit of the children he is slain by a crocodile. The infants are found by Pawang Kuala on the river-bank; he takes them up and tends them till they are adopted by the childless Raja of 1'arisi. Princess Pha Suasa, the admiration of all who behold her, makes acquaintance with a prince of the aerial kingdom, the son of Raja Diu, who is doing tapa (penance) upon earth in the guise of a bird; she secretly promises him her hand.

1) It is pcrhaps from this hikayat-prince that Teuku Uma has borrowed the new name, under which he pretended tu serve the Cömpeuni as a military leader from 1893 to 1896.

3) Suasa is really an amalgam of gold and. eopperj but golden ornaments of Kuropean manufacture are also spoken of as asuasa" by the natives of the Archipelago.