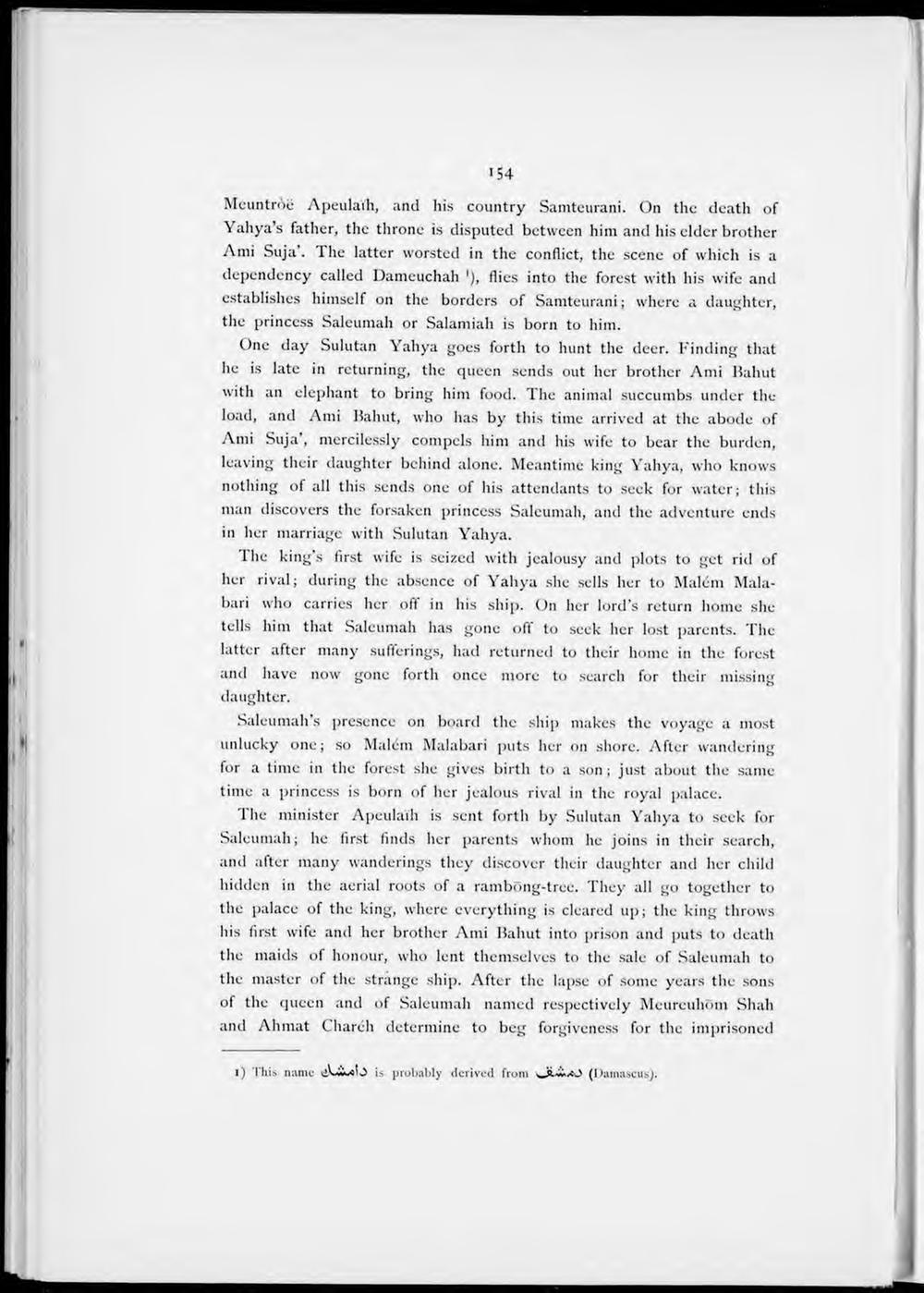 ïvieunrroe Yvpeuiain, and his country bamteurani. (Jn the dcath of Yahya's fatlier, the throne is disputed between him and his cldcr brother Ami Suja'. The latter vvorsted in the conflict, the scene of which is a dependency called Dameuchah '), flies into the forest with his wife and establishes himself on the borders of Samteurani; where a daughter, the princess Saleumah or Salamiah is bom to him.

One day Sulutan Yahya goes forth to hunt the deer. Finding that he is late in returning, the queen sends out her brother Ami Rahut with an elephant to bring him food. The animal succumbs under the load, and Ami Bahut, who has by this time arrived at the abode of Ami Suja', mercilessly compels him and his wife to bear the burden, leaving their daughter behind alone. Meantime king Yahya, who knows nothing of all this sends one of his attendants to seek for water; this man discovers the forsaken princess Saleumah, and the adventure ends in her marriage with Sulutan Yahya.

1 he king's first wife is seized with jealousy and plots to get rid of her rival; during the absence of Yahya she sells her to Malém Malabari who carries her off in his ship. On her lord's return home she tells him that Saleumah has gone off to seek her lost parents. The latter after many sufferings, had returned to their home in the forest and have now gone forth once more to search for their missing daughter.

Saleumah's presence on board the ship makes the voyage a most unlucky one; so Malém Malabari puts her 011 sliore. After wandering for a time in the forest she gives birth to a son; just about the same time a princess is bom of her jealous rival in the royal palace.

The minister Apeulaïh is sent forth by Sulutan Yahya to seek for Saleumah; he first finds her parents whom he joins in their search, and after many wanderings they discover their daughter and her cliild hidden in the aerial roots of a ramböng-trcc. They all go together to the palace of the king, where everything is cleared up; the king tlirows his first wife and her brother Ami Bahut into prison and puts to dcath the maids of honour, who lent themselves to the sale of Saleumah to the master of the strange ship. After the lapse of some years the sons of the queen and of Saleumah named respectively Meureuhom Shali and Ahmat Charéh determine to beg forgiveness for the imprisoned