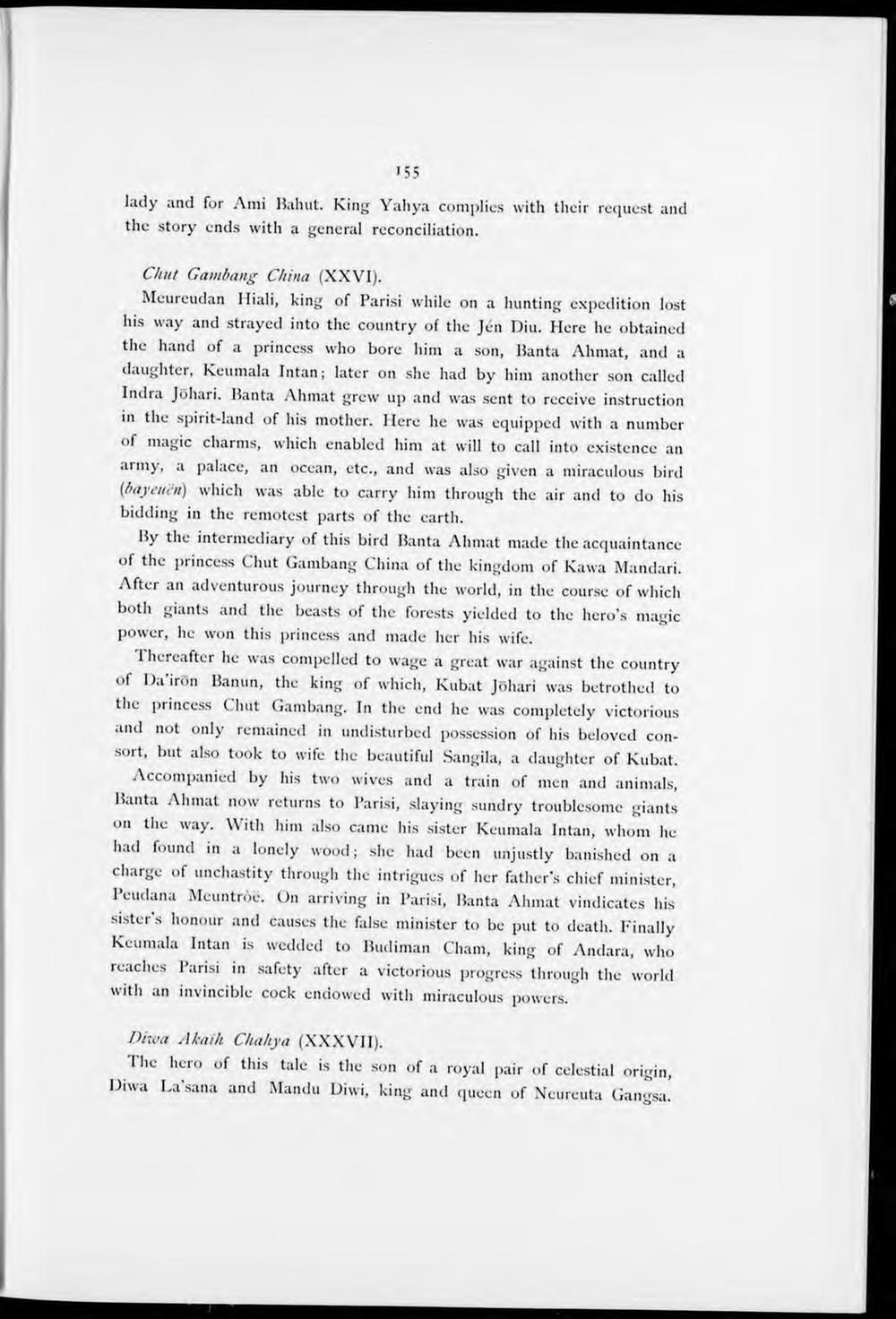 lady and for Ami Bahut. King Yahya complies with their request and the story ends with a gencral rcconciliation.

Meureudan Hiali, king of Parisi while on a hunting expedition lost his way and straycd into the country of the Jén Diu. Here he obtained the hand of a princess who bore him a son, Banta Ahmat, and a daughter, Keumala Intan; later on she had by him another son called Indra Jöhari. Banta Ahmat grew up and was sent to receive instruction in the spirit-land of his mother. Here he was equipped with a number <>f magie charms, which enabled him at will to call into existence an army, a palace, an ocean, etc., and was also given a miraculous bird (baycucn) which was able to carry him through the air and to do his bidding in the remotest parts of the carth.

15y the intermediary of this bird Banta Ahmat made the acquaintance of the princess Chut Gambang China of the kingdom of Kawa Mandari. After an adventurous journey through the world, in the course of which both giants and the beasts of the forests yielded to the hero's magie power, he won this princess and made her his wife.

1 hereafter he was compelled to wage a great war against the country of Da'irön Banun, the king of which, Kubat Jöhari was betrothed to the princess Chut Gambang. In the end he was completely victorious and not only remaincd in undisturbed possession of his beloved consoit, but also took to wife the beautiful Sangila, a daughter of Kubat.

Accompanied by his two wives and a train of men and animals, Banta Ahmat now returns to Parisi, slaying sundry troublesome giants on the way. With him also came his sister Keumala Intan, whom he had found in a lonely wood; she had been unjustly banished on a charge of unchastity through the intrigues of her father's chief minister, Peudana Meuntróe. On arriving in Parisi, Banta Ahmat vindicates his sister s honour and causes the false minister to be put to death. Finally Keumala Intan is wedded to Budiman Cliam, king of Andara, who reaches Parisi in safety after a victorious progress through the world with an invincible cock endowed with miraculous powers.

The hero of this tale is the son of a royal pair of celestial origin, Diwa La sana and Mandu Diwi, king and queen of Neureuta Gangsa.