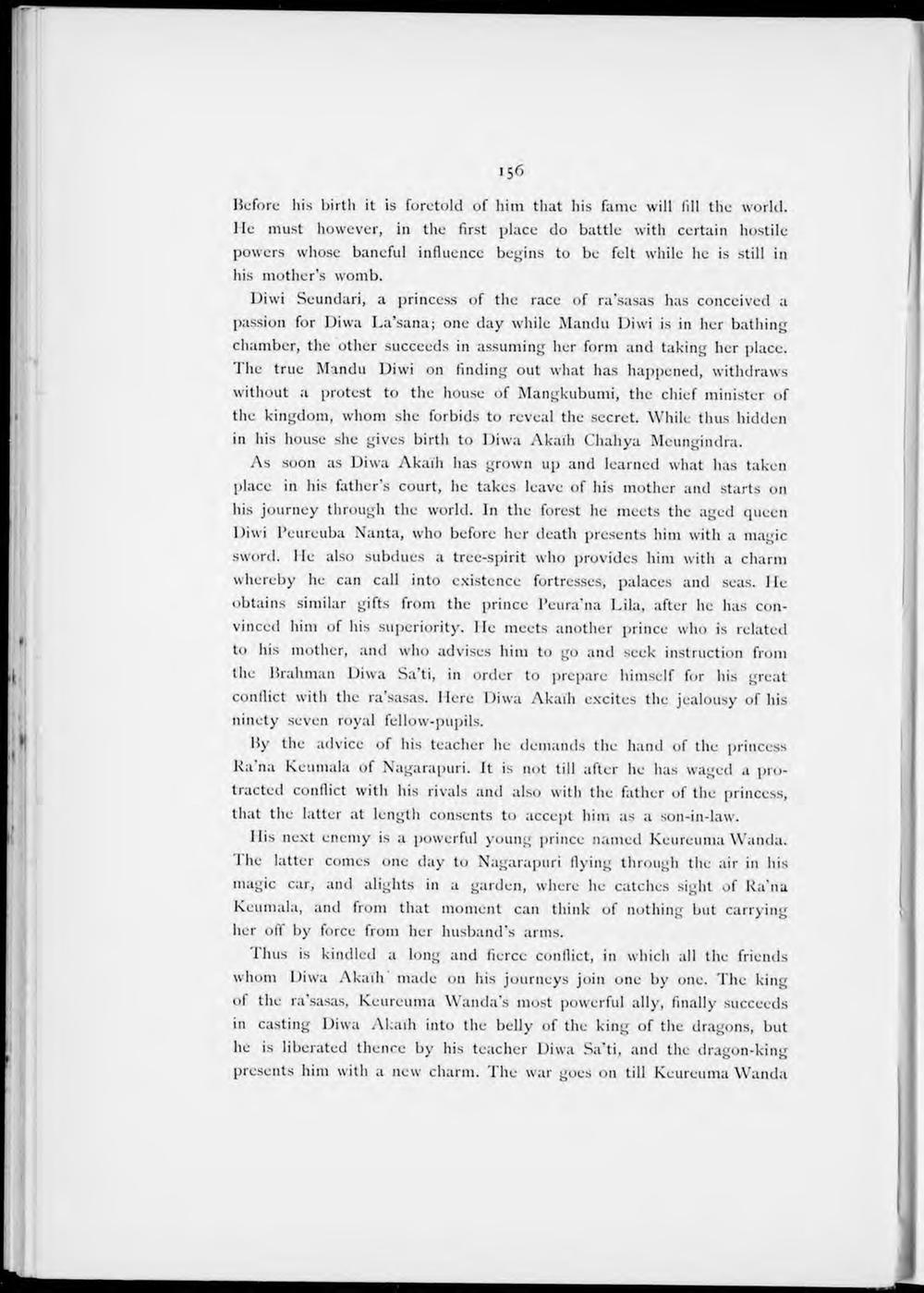 Before his birth it is forctold of him that his famc vvill fill the world. He must however, in the first place do battle with certain hostile powers whose baneful influence begins to be feit while he is still in his mother's womb.

Diwi Seundari, a princess of the race of ra'sasas has conceived a passion for Diwa La'sana; one day while Mandu Diwi is in her bathing chamber, the other succeeds in assuming her form and taking her place. The true Mandu Diwi on finding out what has happened, withdraws without a protest to the house of Mangkubumi, the chief minister of the kingdom, wliom she forbids to reveal the secret. While thus hidden in his house she gives birth to Diwa Akaïh Chahya Meungindra.

As soon as Diwa Akaïh has grown up and learned what has taken place in his father's court, he takes leave of his mother and starts on his journey through the world. In the forest he meets the aged queen Diwi Peureuba Nanta, who before her death presents him with a magie sword. He also subdues a tree-spirit who provides him with a charm whereby he can call into existence fortresses, palaces and seas. He obtains similar gifts from the prince Peura'na Lila, after he has convinced him of his superiority. He meets another prince who is related to his mother, and who advises him to go and seek instruction from the Brahman Diwa Sa'ti, in order to prepare himself for his great conflict with the ra'sasas. Here Diwa Akaïh excites the jealousy of his ninety seven royal fellow-pupils.

By the advicc of his teacher he demands the hand of the princess Ra'na Keumala of Nagarapuri. It is not till after he has waged a protracted conflict with his rivals and also with the father of the princess, that the latter at length consents to accept him as a son-in-law.

His next enemy is a powerful young prince named Keureuma Wanda. I he latter comes one day to Nagarapuri flying through the air in his magie car, and alights in a garden, where he catches sight of Ra'na Keumala, and from that moment can think of nothing but carrying her off by force from her husband's arms.

1 hus is kindled a long and fierce conflict, in which all the friends whom Diwa Akaïh made on his journeys join one by one. The king of the ra'sasas, Keureuma Wanda's most powerful ally, finally succeeds in casting Diwa Akaïh into the belly of the king of the dragons, but he is liberated thence by his teacher Diwa Sa'ti, and the dragon-king presents him with a new charm. The war goes on till Keureuma Wanda