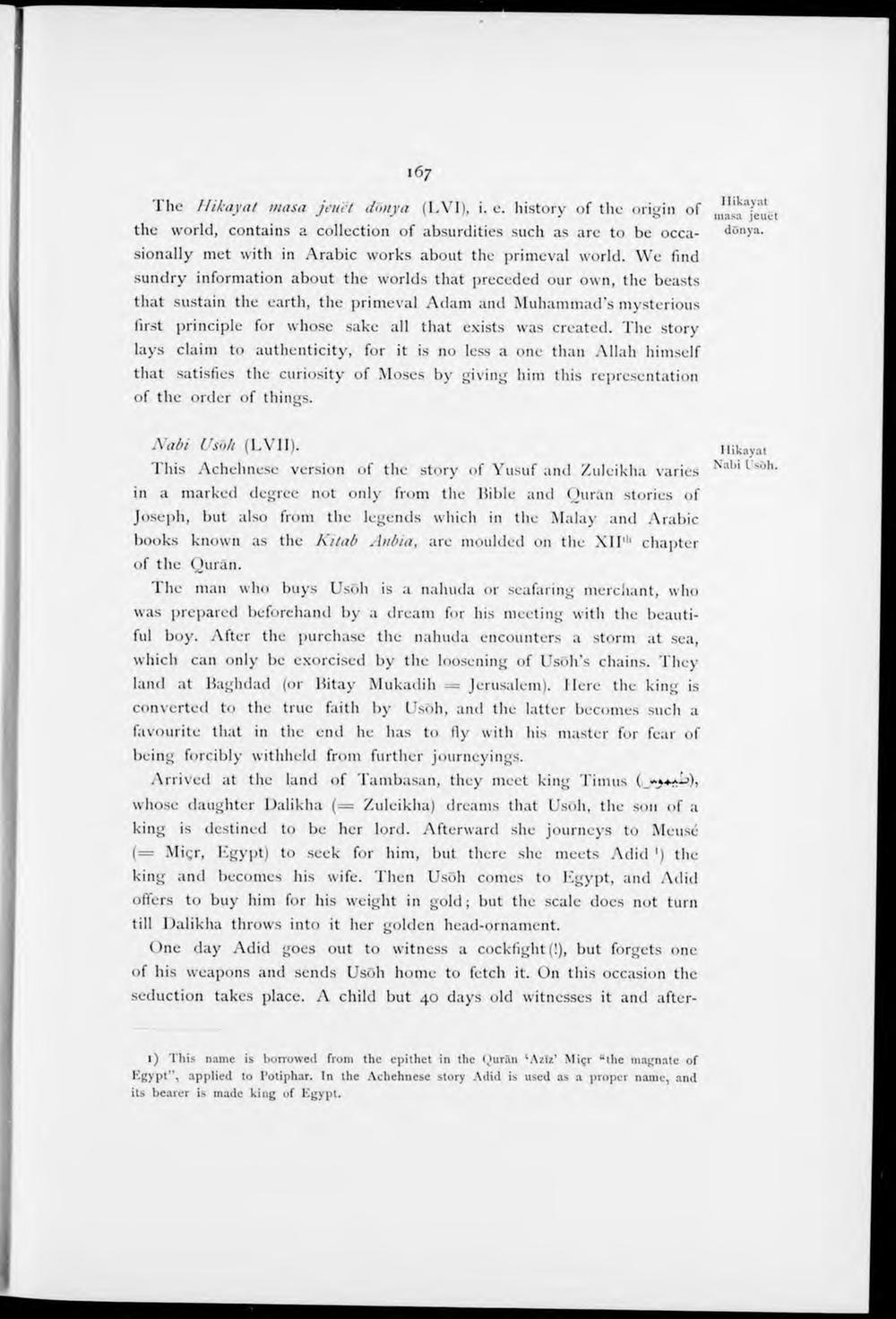 the vvorld, contains a collection of absurdities such as are to be occa- dönya. sionally met with in Arabic works about the primeval world. We find sundry information about the worlds that preceded our own, the beasts that sustain the earth, the primeval Adam and Muhammad's mysterious first principle for whose sake all that exists was created. The story lays claim to authenticity, for it is no less a one than Allah himself that satisfies the curiosity of Moses by giving him this representation of the order of things.

This Achehnese version of the story of Yusuf and Zuleikha varies NablUsohin a marked degree not only from the l?ible and Quran stories of Joseph, but also from the legends which in the Malay and Arabic books known as the Kitab Anbia, are moulded 011 the XII"' chapter of the Quran.

I he man who buys Usöh is a nahuda or seafaring merchant, who was prepared beforehand by a dream for his meeting with the beautiful boy. After the purchase the nahuda encounters a storm at sea,

which can only be exorcised by the loosening of Usöh's chains. They land at Baghdad (or Ritay Mukadih = Jerusalem). Here the king is converted to the true faith by (Jsöh, and the latter becomes such a favourite that in the end he lias to fly with his master for fear of being forcibly withheld from further journeyings.

Arrived at the land of Tambasan, they meet king Timus whose daughter Dalikha (= Zuleikha) dreams that Usöh, the son of a king is destined to be her lord. Afterward she journeys to Meusé (= Migr, Egypt) to seek for him, but there she meets Adid ') the king and becomes his wife. Then Usöh comes to Egypt, and Adid offers to buy him for his weight in gold; but the scale does not turn till Dalikha throws into it her golden head-ornament.

One day Adid goes out to witness a cockfight (!), but forgets one of his weapons and sends Usöh home to fetch it. On this occasion the seduction takes place. A child but 40 days old witnesses it and after-

1) This name is borrowed from the epithet in the Quran cAzïz' Migr "the magnate of Egypt", applied to Potiphar. In the Achehnese story Adid is used as a proper name, and its bearer is made king of Egypt.