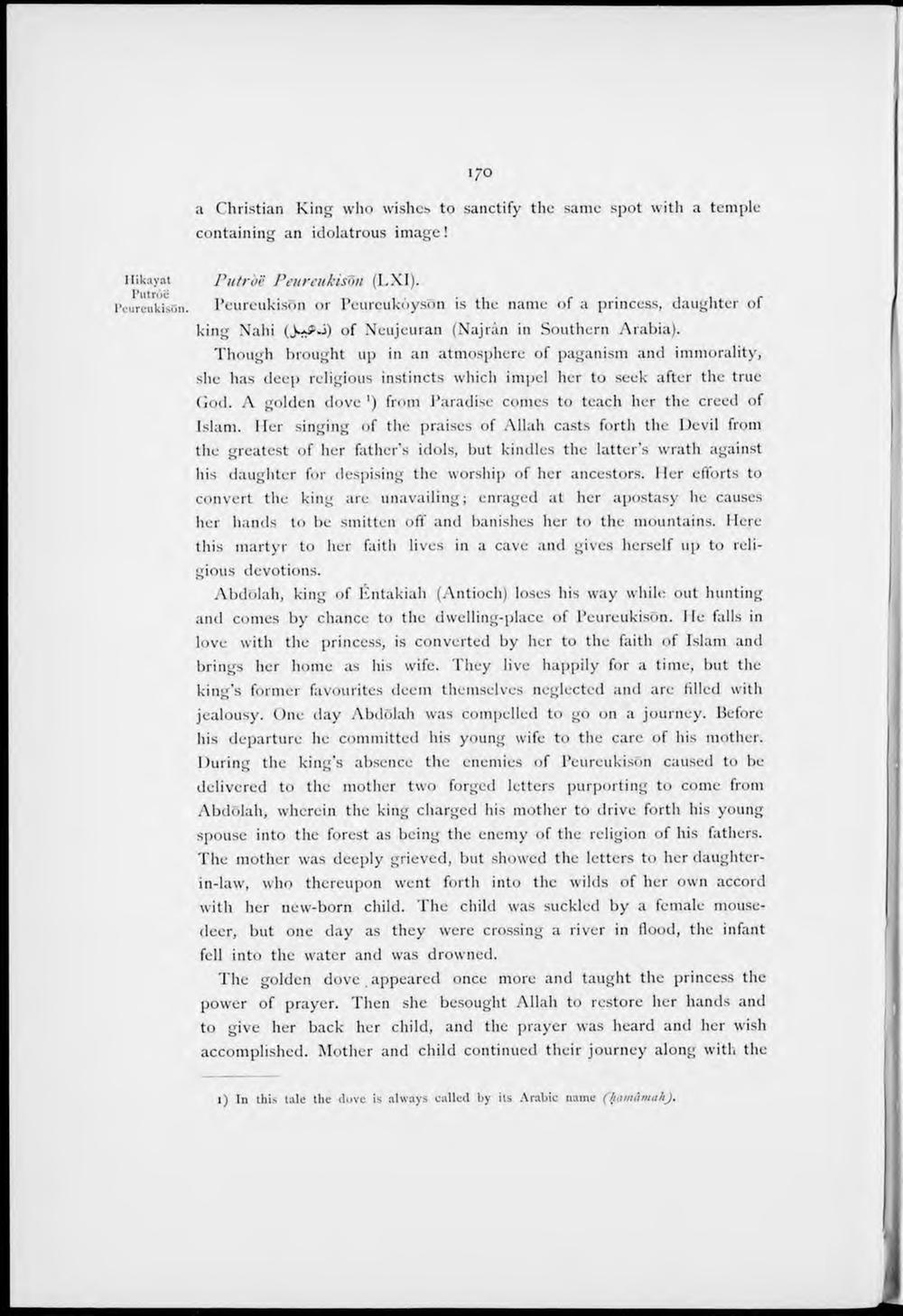 a Christian King who wishes to sanctify the same spot with a temple containing an idolatrous image!

Though brought up in an atmosphere of paganism and immorality, she lias deep religious instincts which impel her to seek after the truc God. A golden dove ') from 1'aradise comes to teach her the creed of Islam, lier singing of the praises of Allah casts forth the Devil from the greatest of her father's idols, but kindies the latter's wrath against his daughter for despising the worship of her ancestors. Her efforts to convert the king are unavailing; enraged at her apostasy hc causes her hands to be smitten off and banishes her to the mountains. Here this martyr to her faith lives in a cave and gives herself up to religious devotions.

Abdölah, king of Éntakiah (Antioch) loses his vvay while out hunting and comes by chance to the dwelling-place of Peureukisön. 1 Ie falls in love with the princess, is converted by her to the faith of Islam and brings her home as his wife. They live happily for a time, but the king's former favourites deem themselves neglected and are filled with jealousy. One day Abdölah was compelled to go on a journey. Before his departure he committed his young wife to the care of his mother. During the king's absence the enemies of Peureukisön caused to be delivered to the mother two forged letters purporting to come from Abdölah, wherein the king charged his mother to drive forth his young spouse into the forest as being the enemy of the religion of his fathers. The mother was deeply grieved, but showed the letters to her daughterin-law, who thereupon went forth into the wilds of her own accord with her new-born child. The child was suckled by a female mousedeer, but one day as they were crossing a river in flood, the infant feil into the water and was drowned.

The golden dove appeared once more and taught the princess the power of prayer. Then she besought Allah to restore her hands and to give her back her child, and the prayer was heard and her wish accomplished. Mother and child continued their journey along with the

i) In this tale the dove is always called by its Arabic name (hamamah).