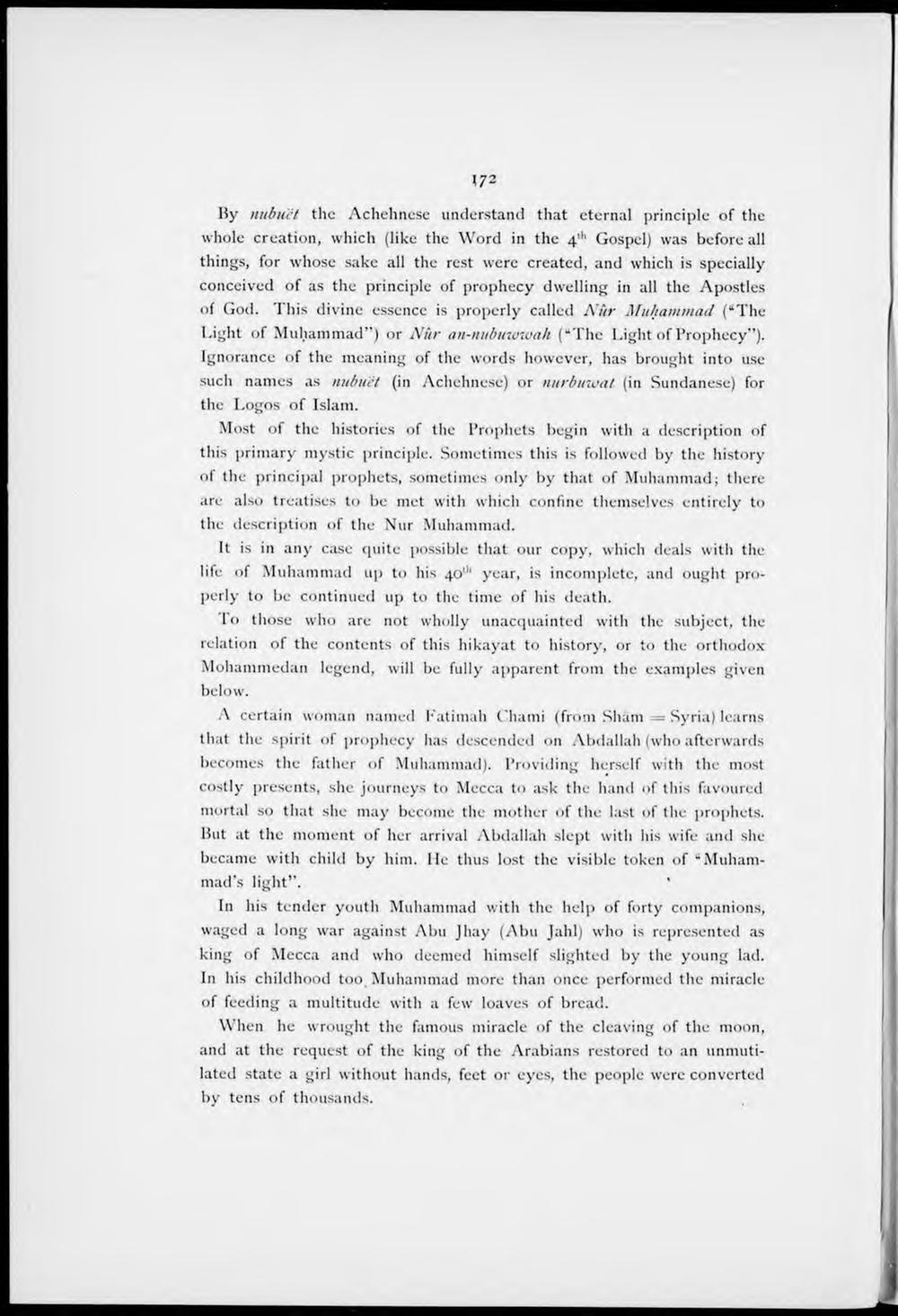 15y nubuct the Achehncse understand that eternal principle of the whole creation, which (like the Word in the 4'11 Gospel) was before all things, for whose sake all the rest were created, and which is specially conceived of as the principle of prophecy dweiling in all the Apostles of God. This divine essence is properly called Nür Muhammad ("The Light of Muhammad") or Nür an-nubuwwah ("The Light of Prophecy"). Ignorance of the meaning of the words however, has brought into use such names as nubuct (in Achehnese) or nurbuwat (in Sundanese) for the Logos of Islam.

Most of the histories of the Prophets begin witli a description of this primary mystic principle. Sometimes this is followed by the history of the principal prophets, sometimes only by that of Muhammad; there are also treatises to be met witli which confine themselves entirely to the description of the Nur Muhammad.

It is in any case quite possible that our copy, which deals with the life of Muhammad up to his 40''' year, is incomplete, and ouglit properly to be continued up to the time of his death.

To those vvho are not wholly unacquainted with the subject, the relation of the contents of this hikayat to history, or to the orthodox Mohammedan legend, will be fully apparent from the examples given below.

A certain woman named Fatimah Chami (from Sham = Syria) learns that the spirit of prophecy has descended on Abdallah (who afterwards becomes the father of Muhammad). Providing herself with the most costly presents, she journeys to Mecca to ask the hand of this favoured mortal so that she may become the mother of the last of the prophets. But at the moment of her arrival Abdallah slept with his wife and she became with child by him. He thus lost the visible token of "Muhammad's light".

In his tender youth Muhammad with the help of forty companions, waged a long war against Abu Jliay (Abu Jahl) who is represented as king of Mecca and who deemed himself slighted by the young lad. In his childhood too Muhammad more than once performed the miracle of feeding a multitude with a few loaves of bread.

When he wrought the famous miracle of the cleaving of the moon, and at the request of the king of the Arabians restored to an unmutilated state a girl without hands, feet or eyes, the people were converted by tens of thousands.