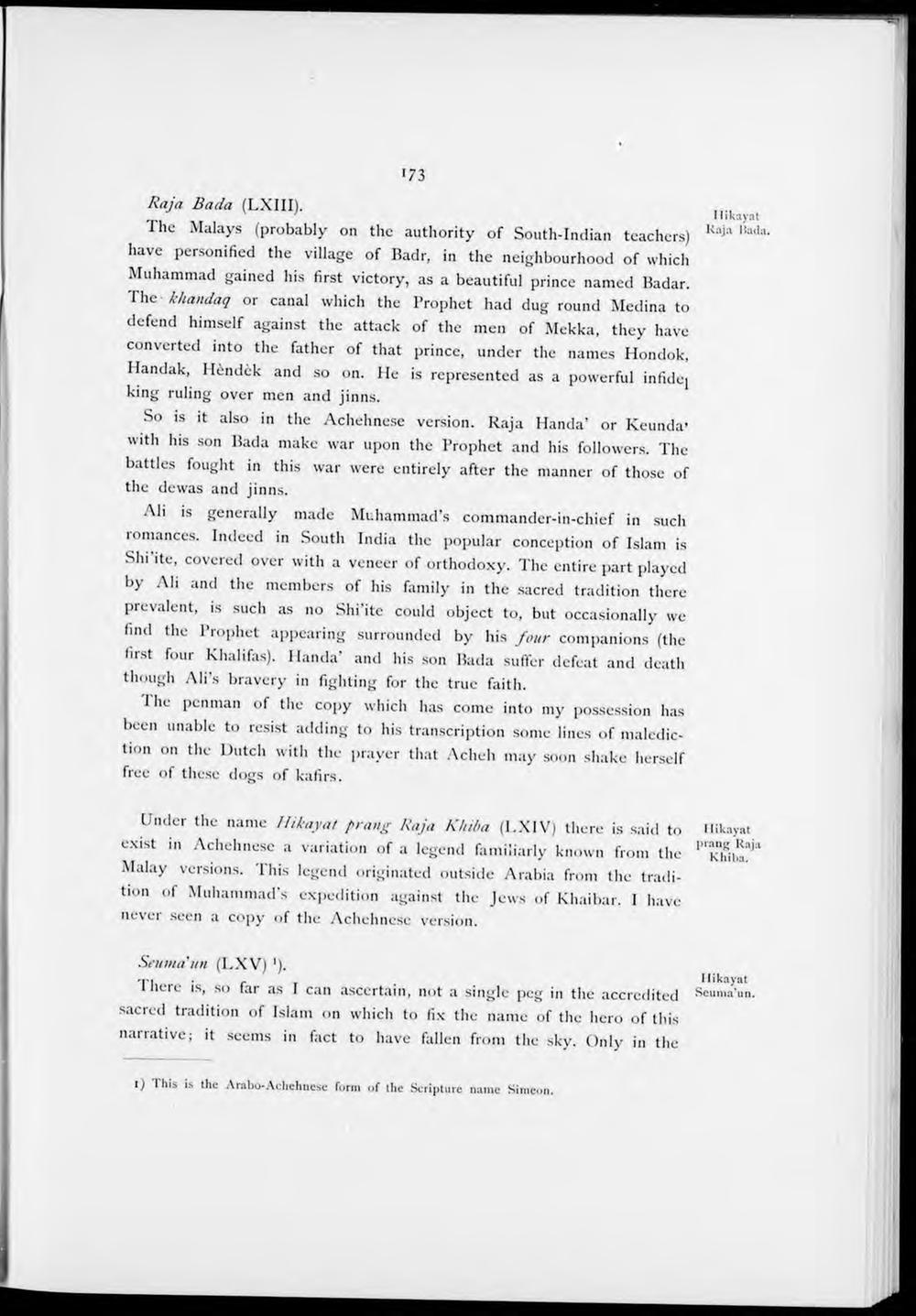 Malays (probably on the authority of South-Indian teachers) Raja l!adahave personified the village of Badr, in the neighbourhood of which Muhammad gained his first victory, as a beautiful prince named Badar. The khandaq or canal which the Prophet had dug round Medina to defend himself against the attack of the men of Mekka, they have converted into the father of that prince, under the names Hondok,

Handak, Hendek and so on. He is represented as a powerful infidej king ruling over men and jinns.

with his son Bada make war upon the Prophet and his followers. The battles fought in this war were entirely after the manner of those of the dewas and jinns.

Ali is generally made Muhammad's commander-in-chief in such romances. Indeed in South India the popular conception of Islam is Sh' 'te> covered over with a veneer of orthodoxy. The entire part played by Ali and the mombers of his family in the sacred tradition there prevalent, is such as no Shi'ite could object to, but occasionally we find the Prophet appearing surrounded by his four companions (the first four Khahfas). Handa' and his son Bada suffer defeat and death though Ali's bravery in fighting for the true faith.

1 he penman of the copy which has come into my possession has been unable to rcsist adding to his transcription some lines of malcdicti°n 011 the Dutch with the prayer that Acheh may soon shake herself free of these dogs of kafirs.

Under the name Hikayat prang Raja Khiba (LXIV) there is said to Hikayat exist .n Achehnese a variation of a legend familiarly known from the 'ThiiJa^ Malay verslons. This legend originated outside Arabia from the tradition of Muhammad's expedition against the Jews of Khaibar. I have never seen a copy of the Achehnese version.

ineie is, so iar as I can ascertain, not a single peg in the accredited Seuma'un.

sacred tradition of Islam on which to fix the name of the hero of this narrative; ït seems in fact to have fallen from the sky. Only in the

i) This is the Arabo-Achehnese form of the Scripture name Simeon.