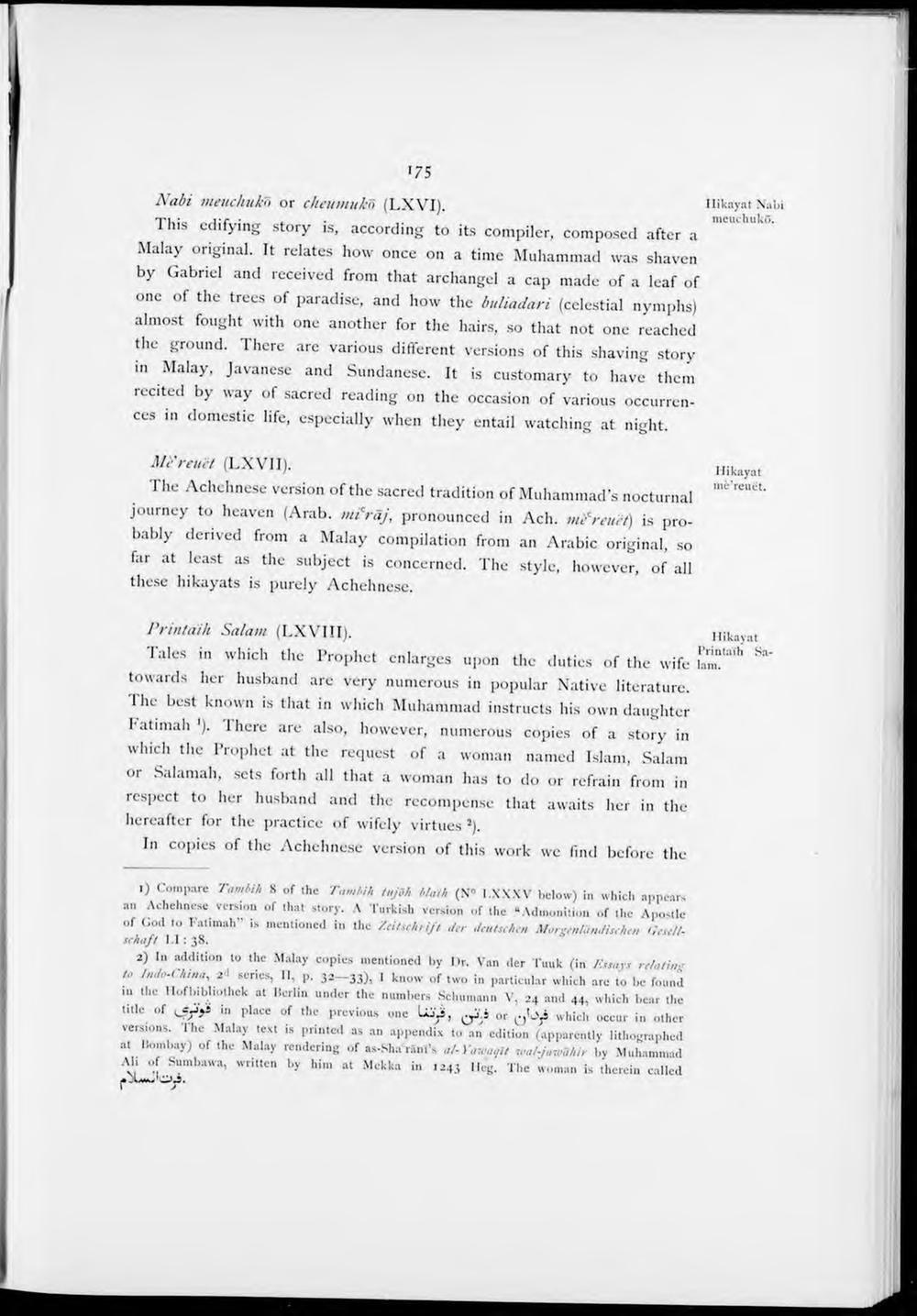 edifying story is, according to its compiler, composed aftcr a

Malay original. It relates hovv once on a time Muhammad was shaven

one of the trees of paradise, and how the buliadari (celestial nymphs)

al most fought with one another for the hairs, so that not one reachcd

the ground. There are various different versions of this shaving story

m Malay, Javanese and Sundanese. It is customary to have them

ces in domestic life, especially when they entail watching at night.

The Achchnese version of the sacred tradition of Muhammad's nocturnal journey to heaven (Arab. mfraj, pronounced in Ach. mfreuët) is probably derived from a Malay compilation from an Arabic original, so far at least as the subject is concerned. The style, however, of all these hikayats is purely Achehnese.

Ta'es i" which the Prophet enlarges upon the duties of the wife 1™"'"'" Sa towards her husband are very numerous in popular Native literature.

I he L>cst known is that in which Muhammad instructs his own daughter I-atimah '). Ihere are also, however, numerous copies of a story in which the Prophet at the request of a woman named Islam, Salam or Salamah, sets forth all that a woman has to do or refrain from in respect to her husband and the recompense that awaits her in the hereaftcr for the practice of wifely virtues 2).

2) In addition to the Malay copies mentioned by I)r. Van der Tuuk (in Essays rtlating to InJo-Chtna, 2-1 series, II, p. 32-33), I know of two in particular which are to be found in the Hofbibliothek at Berlin under the numbers Schumann V, 24 and 44, which bear the title of in place of the previous one loyi, or C)Ly which occur in other versions. Ihe Malay text is printcd as an appendix to an cdition (apparently lithographed at Bombay) of the Malay rendering of as-Shacranl's al- Yawaqtt wat-jawahir by Muhammad Al, of Sumbawa, written by him at Mekka in .243 Heg. The woman is therein called r j