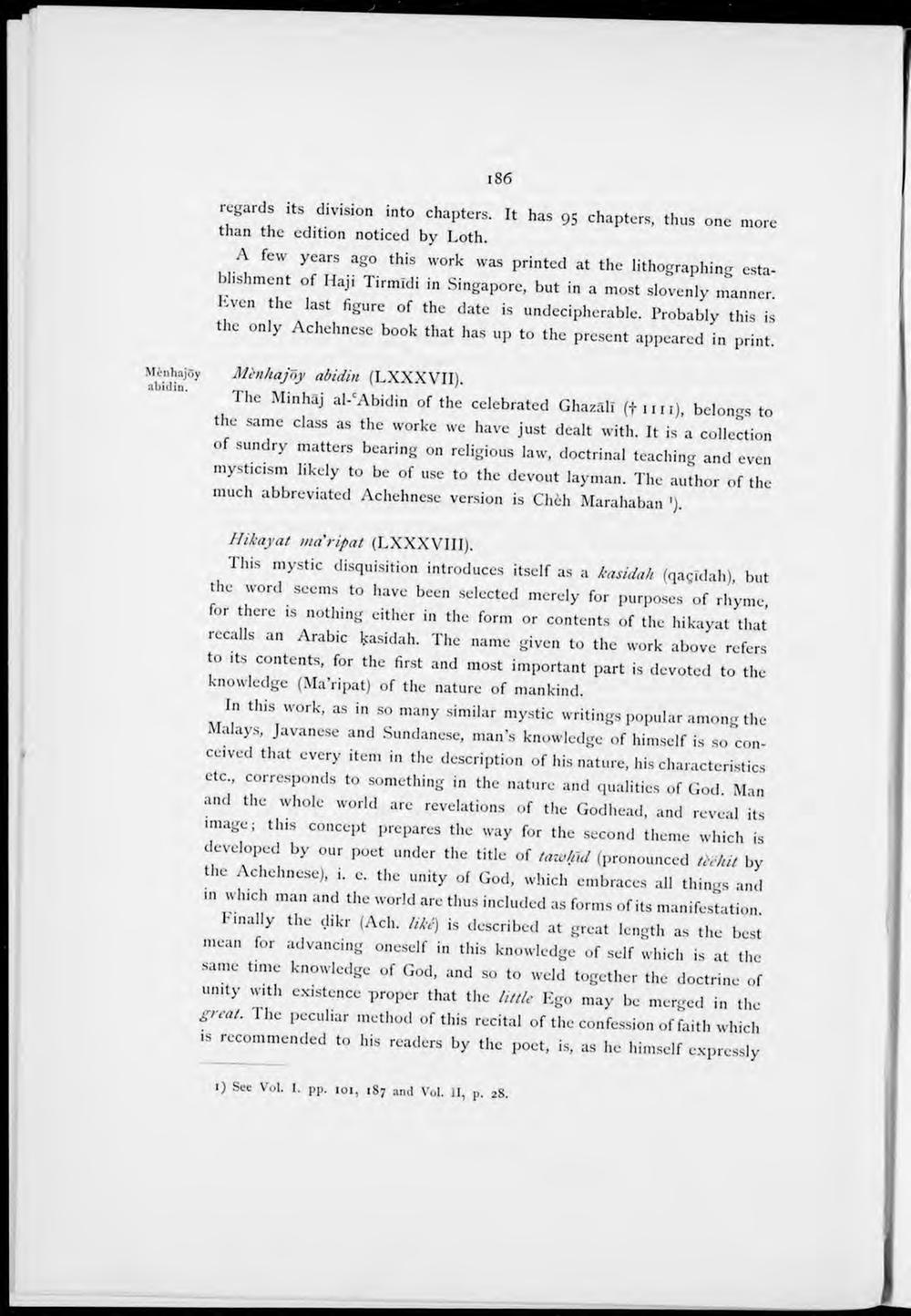 regards its division into chapters. It has 95 chapters, thus one more than the cdition noticed by Loth.

A few years ago this work was printed at the lithographing estaishment of Haji Tirmïdi in Singapore, but in a most slovenly manner. ' ven thc last «gure of the date is undecipherable. Probably this is the only Achehnese book that has up to the present appeared in print.

he Minhaj al-cAbidin of the celebrated Ghazall (f 1111), belongs to tie same class as the worke we have just dealt with. It is a collection of sundry matters bearing on religious law, doctrinal teaching and even mysticism likely to be of use to the devout layman. The author of the much abbreviated Achehnese version is Chèh Marahaban ').

This mystic disquisition introducés itself as a kasidah (qagldah), but the word seems to have been selected merely for purposes of rhyme, or t lere is nothing either in the form or contents of the hikayat that recalls an Arabic kasidah. The name given to the work above refers to its contents, for the first and most important part is devoted to the knowledge (Ma'ripat) of the nature of mankind.

In this work, as in so many similar mystic writings popular among the . Ialays, Javanese and Sundanese, mans knowledge of himself is so conceived that evcry item in the description of his nature, his characteristics etc., corresponds to something in the nature and qualities of God. Man and the whole world are revelations of the Godhead, and reveal its image; this concept prepares the way for the second theme which is developed by our poet under the title of tawlnd (pronounced tèchit by t ie Achehnese), 1. e. the unity of God, which embraces all things and m which man and the world are thus included as forms of its manifestation.

ina y the dikr (Ach. liké) is described at great length as the best mean for advancing oneself in this knowledge of self which is at the same time knowledge of God, and so to weid together the doctrine of unity with ex.stence proper that thc little Ego may be merged in the great. The pecuhar method of this recital of the confession of faith which is recommended to his readers by the poet, is, as he himself expressly