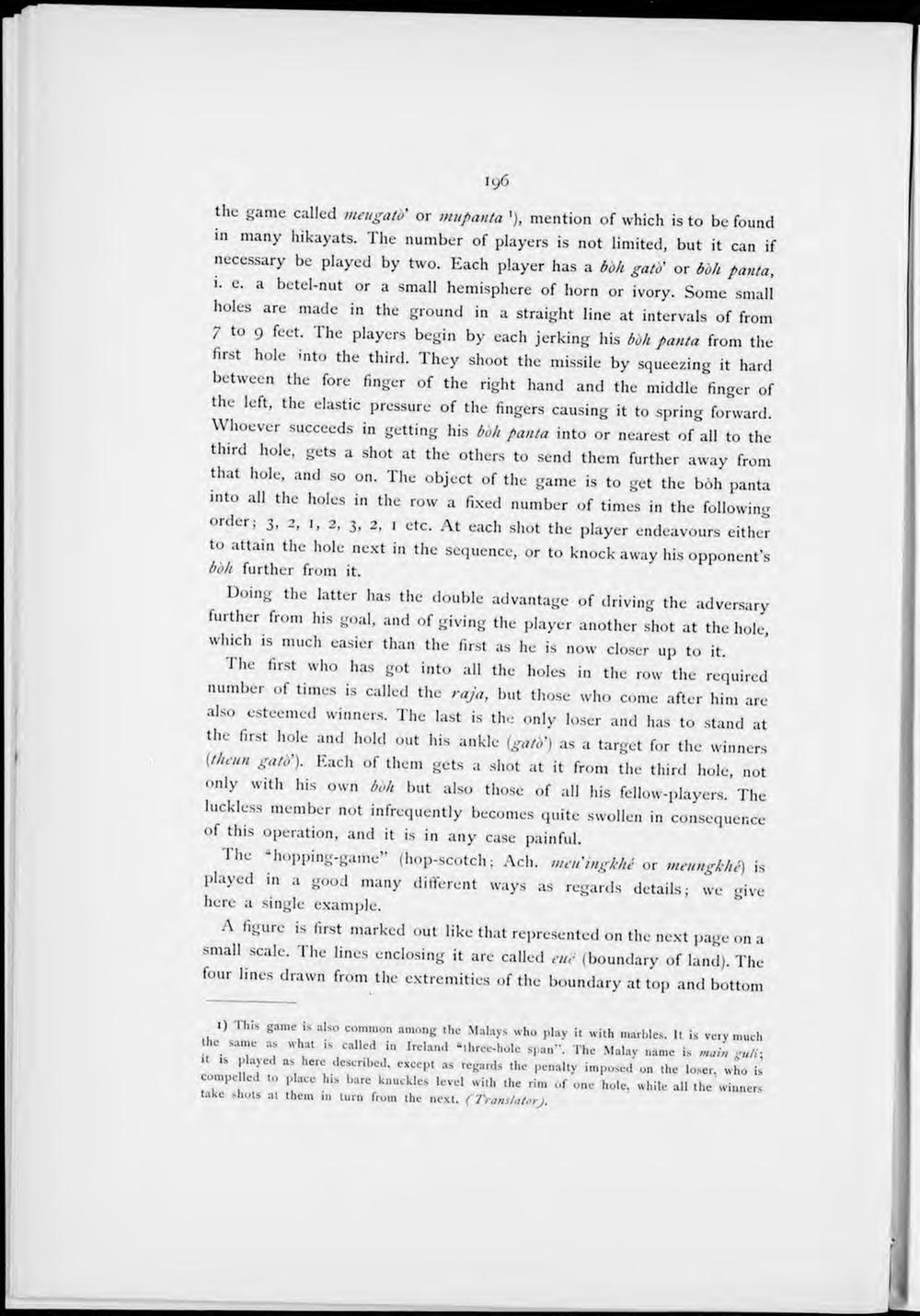 the game called meugato or mupanta '), mention of which is to be found in many hikayats. The number of players is not limited, but it can if necessary be played by two. Each player has a boh gatö' or boh pan/a, 1. e. a betel-nut or a small hemisphere of horn or ivory. Some small holes are made in the ground in a straight line at intervals of from 7 to 9 feet. The players begin by each jerking his boh panta from the first hole into the third. They shoot the niissile by squeezing it hard between the fore finger of the right hand and the middle finger of the left, the elastic pressure of the fingers causing it to spring forward. Whoever succeeds in getting his boh panta into or nearest of all to the third hole, gets a shot at the others to send them further away from that hole, and so on. The object of the game is to get the bóh panta into all the holes in the row a fixed number of times in the following order, 3, 1, 2, 3, 2, 1 etc. At each shot the player endeavours either to attain the hole next in the sequence, or to knock away his opponent's boh further from it.

Doing the latter has the doublé advantage of driving the adversary further from his goal, and of giving the player another shot at the hole, which is much easier than the first as he is now closer up to it.

The first who has got into all the holes in the row the required number of times is called the raja, but those who come after him are also esteemed winners. The last is the only loser and has to stand at the first hole and hold out his ankle (gatö') as a target for the winners {thcun gatö'). Each of them gets a shot at it from the third hole, not only with his own boh but also those of all his fellow-players. The luckless member not infrequently becomes quite swollen in consequence of this operation, and it is in any case painful.

The «hopping-game" (hop-scotch; Ach. mcutngkhc or meungkhé) is played in a good many different ways as regards details; we give liere a single example.

A figure is first marked out like that represented on the next page on a small scale. The lines enclosing it are called euc (boundary of land). The four lines drawn from the extremities of the boundary at top and bottom

I) This game is also eommon among the Malays who play it with marbles. It is very much the samc as what is called in Ireland ",hree-hole span". The Malay name is main gutiIt IS played as here described, except as regards the penalty imposed on the loser, who is compeled to place his bare knuckles level with the rim of one hole, while all the winners take shots at them 111 turn from the next. (Translator).