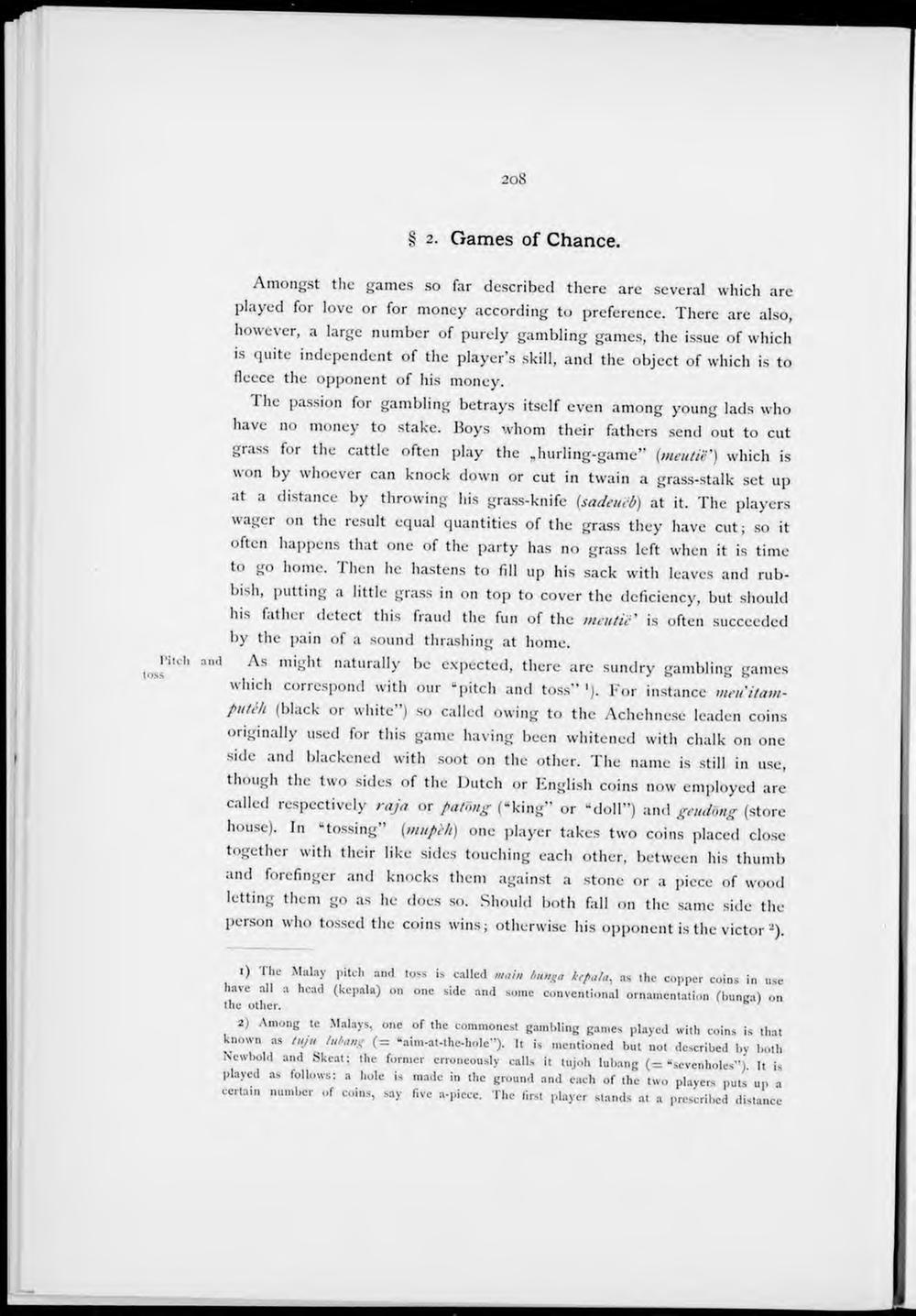 Amongst tlic games so far described there are several which are played foi love or for money according to preference. There are also, hou ever, a large number of purely gambling games, the issue of which is quite independent of the player's skill, and the object of which is to fleece the opponent of his money.

1 lie passion for gambling betrays itself even among young lads who have no money to stake. Boys whom their fathers send out to cut grass for the cattlc often play the „hurling-game" (meutië') which is won by whoever can knock down or cut in twain a grass-stalk set up at a distance by throwing his grass-knife (sadeucb) at it. The players wager on the result equal quantities of the grass they have cut; so it often happens that one of the party has no grass left when it is time to go home. Then he hastens to fill up his sack with leaves and rubbish, putting a little grass in on top to cover the deficiency, but should his father detect tliis fraud the fun of the meutië' is often succeeded by the pain of a sound thrashing at home.

loss'' '' af"' naturally be expected, there are sundry gambling games

which correspond with our "pitch and toss" ■). For instance meuitamputeh (black or white") so called owing to the Achehnese leaden coins originally used for this game having been whitened with chalk on one side and blackened with soot on the other. The name is still in use, though the two sides of the Dutch or English coins now employed are called respectively raja or patong ("king" or "doll") and geudöng (store house). In "tossing" (mupèh) one player takes two coins placed close together with their like sides touching each other, between his thumb and forefinger and knocks them against a stone or a piece of wood letting them go as he does so. Should both fall on the same side the person who tossed the coins wins; otherwise his opponent is the victor 3).

1) The Malay pitch and toss is called main bunga kefala, as the copper coins in use have all a head (kepala) on one side and sorae conventional ornamentation (bunga) on the other. '

2) Among te Malays, one of the commonest gambling games played with coins is that

known as tuju lubang (= "aim-at-the-hole"). It is mentioned but not described by both Newbold and Skeat; the former erroneously calls it tujoh lubang (= «sevenholes"). It is played as follows: a hole is made in the ground and each of the two players puts up a certain number of coins, say f.ve a-piece. The first player stands at a prescribed distance