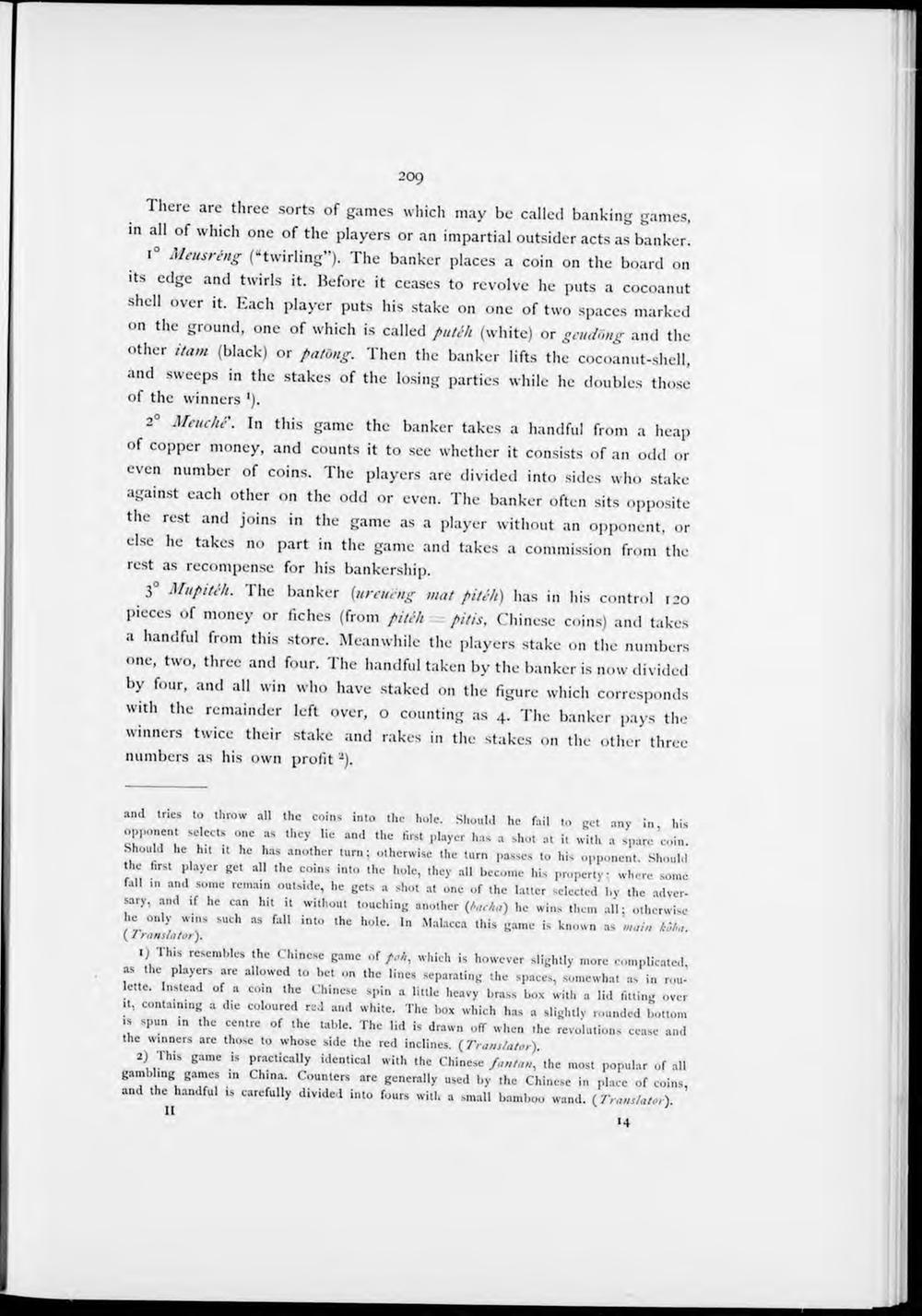 There are three sorts of games which may be called banking games, in all of which one of the players or an impartial outsider acts as banker.

i Meusréng ("twirling"). The banker places a coin on the board on its edge and twirls it. Before it ceases to revolve he puts a cocoanut shell over it. Each player puts his stake on one of two spaces marked on the ground, one of which is called putéh (white) or geudöng and the other itam (black) or patong. Then the banker lifts the cocoanut-shell, and sweeps in the stakes of the losing parties while he doublés those of the winners ').

2° Meuche. In this game the banker takes a handful from a heap of copper money, and counts it to see whether it consists of an odd or even number of coins. The players are divided into sides who stake against each other on the odd or even. The banker often sits opposite the rest and joins in the game as a player without an opponent, or else he takes 110 part in the game and takes a commission from the rest as recompense for his bankership.

3° Mupitéh. The banker {urcuëng mat pitéh) lias in his control 120 pieces of money or fiches (from pitéh = pitis, Chinese coins) and takes a handful from this store. Meanwhile the players stake on the numbers one, two, three and four. The handful taken by the banker is now divided by four, and all win who have staked on the figure which corresponds with the rcmainder left over, o counting as 4. The banker pays the winners twice their stake and rakes in the stakes on the other three numbers as his own profit2).

and trics to tlirow all the coins into the hole. Should he fail to get any in his opponent selects one as they lie and the first player has a shot at it with a spare 'coin. Should he hit ,t he has another turn; otherwise the turn passes to his opponent. Should the first player get all the coins into the hole, they all become his property • where some and SOme rem:lin outside> 1'C gets a shot at one of the latter selectcd by the adversary, and if he can hit it without touching another (Jkacha) he wins them all; otherwise he only wins such as fall into the hole. In Malacca this game is known as kolu,.

1) This resembles the Chinese game of ƒ<,/,, which is however slightly more complicated, as the players are allowcd to bet on the lines separating the spaces, somewhat as in roulette. Instead of a coin the Chinese spin a little heavy brass box with a lid fitting over .t, containing a d,e coloured red and white. The box which has a slightly rounded botton, is spun ,n the centre of the table. The lid is drawn off when the revolutions cease and the winners are those to whose side the red inclines. (Translator).

2) This game is practically identical with the Chinese ,he most popular of all gambling games in China. Counters are generally used by the Chinese in place of coins, and the handful is carefully divided into fours with a small bamboo wand. (Translator).