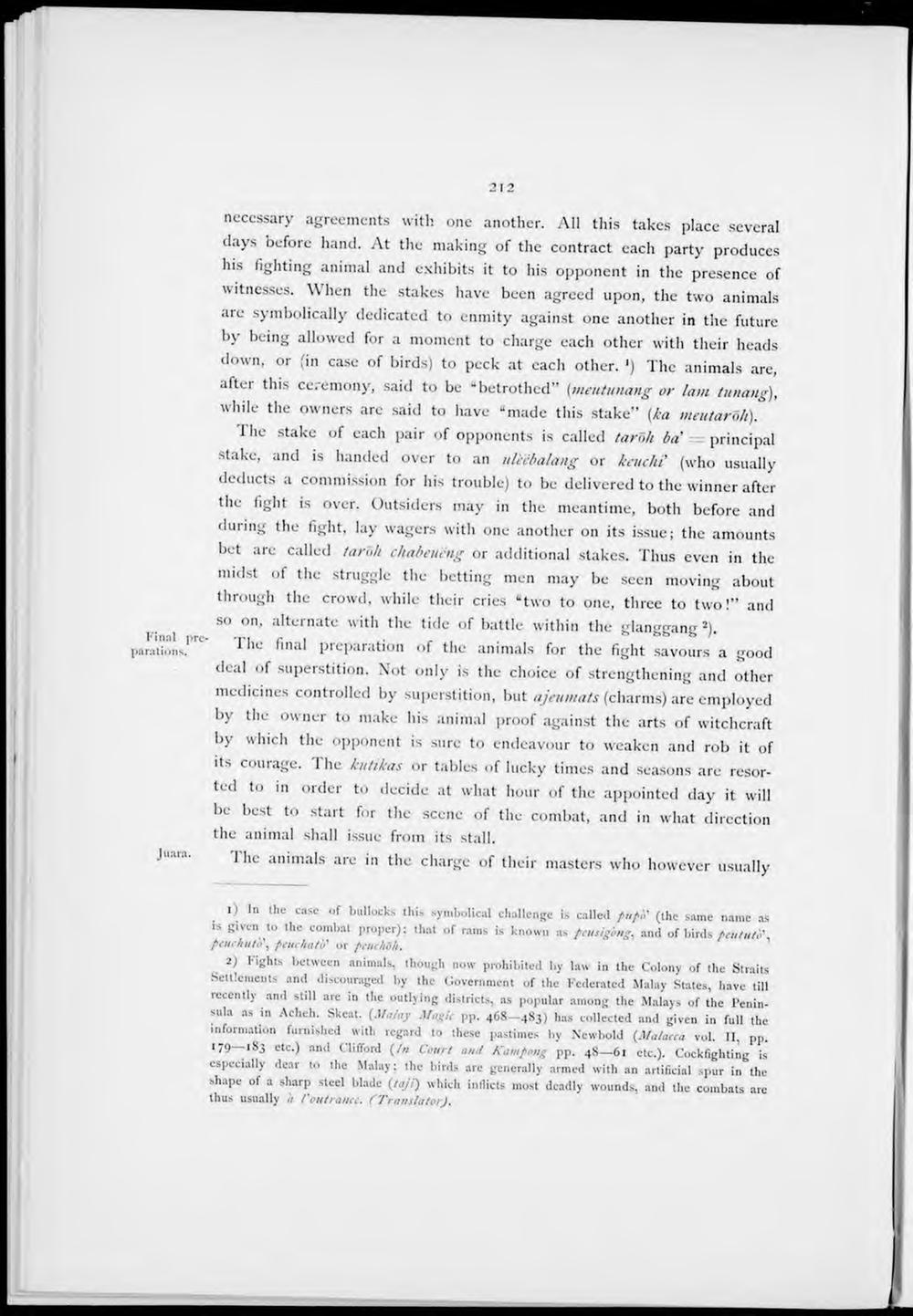 neccssary agrecmcnts with one another. All this takcs place several days before hand. At the making of the contract each party produces his fighting animal and exhibits it to his opponent in the presence of witnesses. \V hen the stakes have been agreed upon, the two animals are symbolically dedicated to enmity against one another in the future by being allowed for a moment to charge each other with their heads down, or (in case of birds) to peck at each other. ') The animals are, after this ceremony, said to be "betrothed" (meutunang or lam tunang), while the owners are said to have "made this stake" (ka meutaröh).

stake, and is handed over to an ulèëbalang or ketichï (who usually

the fight is over. Outsiders may in the meantime, both before and

during the fight, lay wagers with one another on its issue; the amounts

bet are called taröh chabeuëng or additional stakes. Thus even in the

through the crowd, while their cries "two to one, three to two!" and

so on, alternate with the tide of battle within the elanetrane 2)

parations. L 111,1 prcp&ration of the animals for the fight savours a good

deal of superstition. Not only is the choice of strengthening and other

medicines controlled by superstition, but ajeumats (charms) are employed

its courage. 1 he kutikas or tables of lucky times and seasons are resor-

be best to start for the scene of the combat, and in what direction

the animal shall issue from its stall.

1) In thu case of bullocks this symbolical challenge is called pupo (the same name as is givcn to the combat proper); that of rams is known as peusigong, and of birds pat tut o* pcuchuto\ peuchatb' or peuchöh.

2) Kights between animals, though now prohibited by law in the Colony of the Straits

Setüements and discouraged by the Government of the Federated Malay States, have till ïecently and still are in the outlying districts, as popular among the Malays of the Peninsula as in Acheh. Skeat. {Malay Magie pp. 468-483) has collècted and given in full the information furnished with regard to these pastimes by Newbold {Malacca vol. II, pp.

179—183 etc.) and Clifford (ƒ« Court and Kampong pp. 48—61 etc.). Cockfighting is especially dear to the Malay; the birds are generally armed with an artificial spur in the shape of a sharp steel blade (taji) which inflicts most deadly wounds, and the combats are thus usually a Voutrance. (Translater).