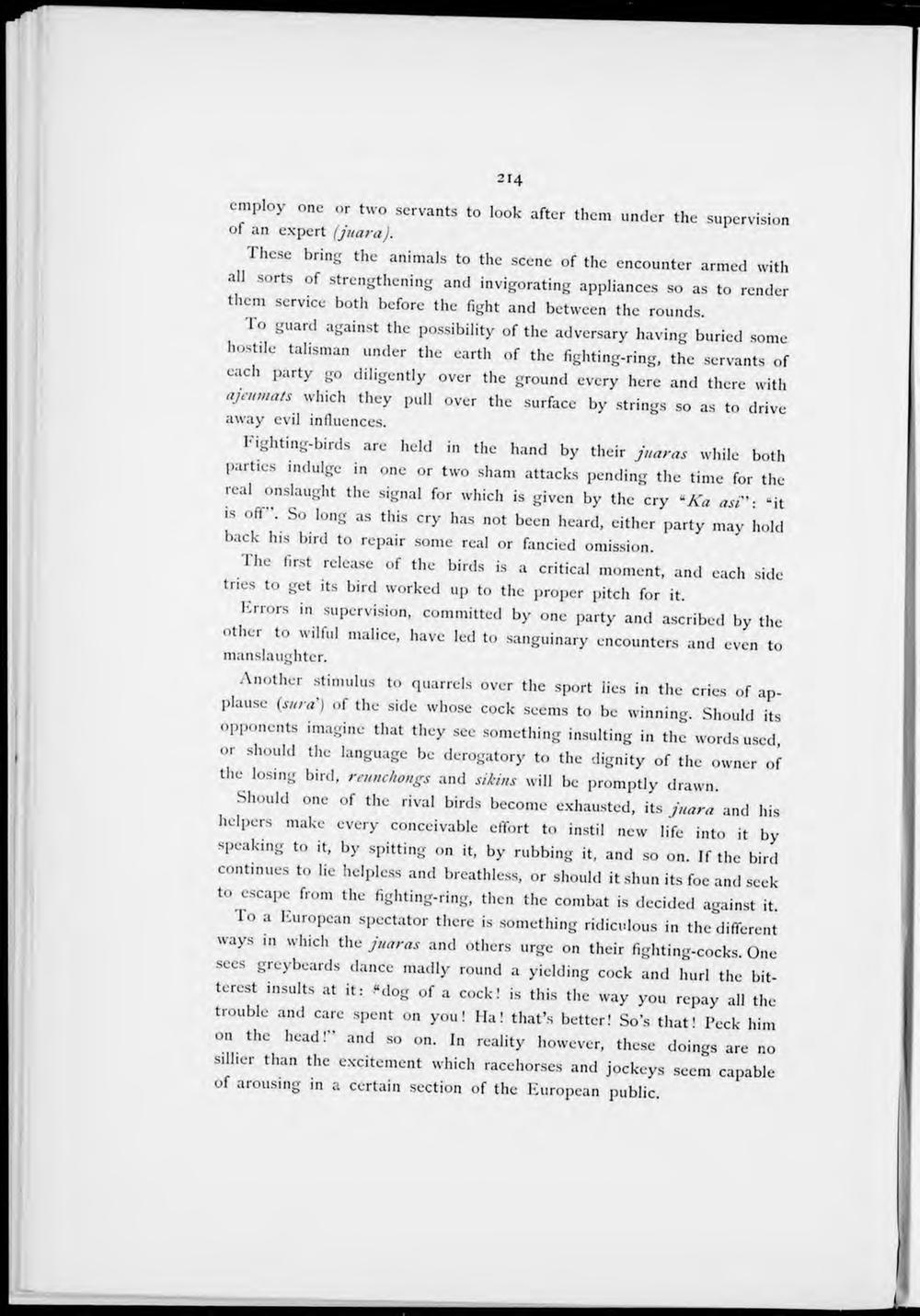 employ onc or two servants to look aftcr them under the supcrvision of an expert (jnara).

These bring the animals to the scene of the encounter armed vvith aH sorts of strengthening and invigorating appliances so as to render them service both before the fight and between the rounds.

Io guard against the possibility of the adversary having buried some hostile talisman under the earth of the fighting-ring, the servants of cao Ixirty S° diligently over the ground every here and there witli ajeumats which they pull over the surface by strings so as to drive away evil influences.

1' ïghting-birds are held in the hand by their juaras while both parties indulge in one or two sham attacks pending the time for the real onslaught the signal for which is given by the cry * Ka as?' • «it .s off". So long as this cry has not been heard, either party may hold back his bird to repair some real or fancied omission.

The first release of the birds is a critical moment, and each side tnes to get its bird worked up to the proper pitch for it.

Errors in supervision, committed by one party and ascribed by the

other to wilful malice, have led to sanguinary encounters and even to manslaughter.

Another stimulus to quarrels over the sport lies in the cries of applause (sura') of the side whose cock seems to be winning. Should its opponents imagine that they sec something insulting in the words uscd, or should the language be derogatory to the dignity of the owner of the losing bird, reunchongs and sikins will be promptly drawn.

Should one of the rival birds become exhausted, its juara and his helpers make every conceivable effort to instil new life into it by speaking to it, by spitting on it, by rubbing it, and so on. If the bird continues to lie helpless and breathless, or should it sliun its foe and seek to escape from the fighting-ring, then the combat is decided against it.

lo a European spectator there is something ridiculous in the different ways 111 which the juaras and others urge on their fighting-cocks. One sces greybeards dance madly round a yielding cock and hurl the bitterest insults at it: "dog of a cock! is this the way you repay all the trouble and care spent on you! Ha! that's better! So's that! Peck him on the head!" and so on. In reality however, these doings are no sillier than the excitement which racehorses and jockeys seem capable of arousing in a certain section of the European public.