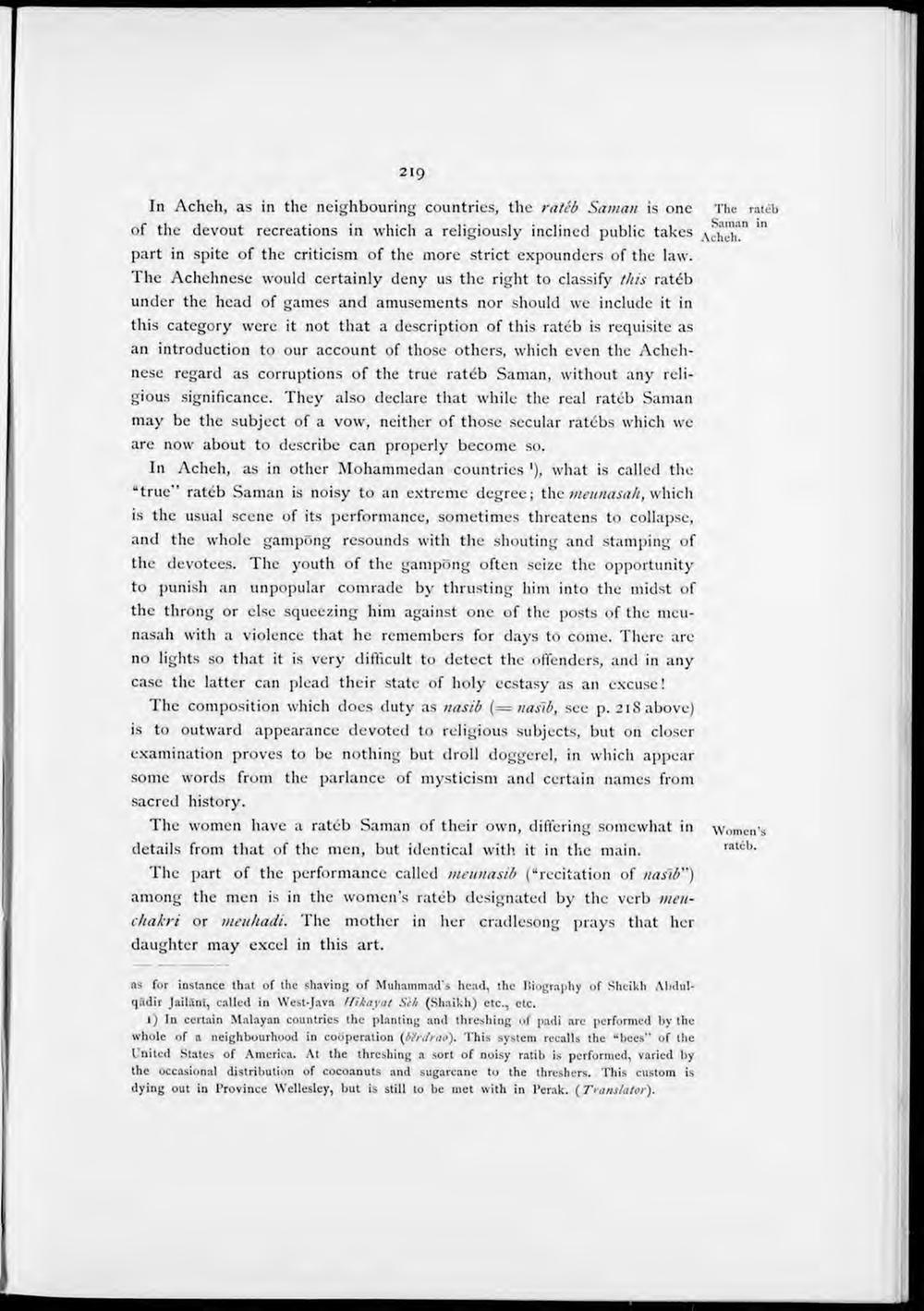 In Achch, as in the neighbouring countries, the ratcb Saman is onc The ratéb of the devout recreations in which a religiously inclincd public takes part in spite of the criticism of the more strict expounders of the law. The Achehnese would certainly deny us the right to classify this ratéb under the head of games and amusements nor should we include it in this category were it not that a description of this ratéb is requisite as an introduction to our account of those others, which even the Achehnese regard as corruptions of the truc ratéb Saman, without any religious significance. They also declare that while the real ratéb Saman may be the subject of a vow, neither of those secular ratébs which we are now about to describe can properly become so.

In Acheh, as in other Mohammedan countries '), what is called the atrue" ratéb Saman is noisy to an extreme degree; the meunasah, which is the usual scene of its performance, sometimes threatens to collapse,

and the whole gampöng resounds with the shouting and stamping of the devotees. The youth of the gampöng often seize the opportunity to punish an unpopular comrade by thrusting him into the midst of the throng or else squeezing him against one of the posts of the meunasah with a violence that he remembers for days to come. There are no lights so that it is very difficult to detect the offenders, and in any case the latter can plead their state of holy ecstasy as an excuse!

The composition which does duty as nasib (= nas'ib, see p. 2iSabove)

is to outward appearance devoted to religious subjects, but on closer examination proves to be nothing but droll doggerei, in which appear some words from the parlance of mysticism and certain names from sacred history.

The women have a ratéb Saman of their own, differing somewhat in womcn's details from that of the men, but identical with it in the main. ratéb.

The part of the performance called meunasib ("recitation of nasïb")

among the men is in the womcn's ratéb designated by the verb vieuchakri or meuhadi. The mother in her cradlesong prays that her daughter may excel in this art.

as for instance that of the shaving of Muhammad's head, the Iiiography of Sheikh Abdulqadir Jailanï, called in West-Java Hikayat Seh (Shaikh) etc., etc.

l) lil certain Malayan countries the planting and threshing of padi are performed by the whole of a neighbourhood in coöperation (bïrdrao). This system recalls the "hees" of the United States of America. At the threshing a sort of noisy ratib is performed, varied by the occasional distribution of cocoanuts and sugarcane to the threshers. This custom is dying out in Province Wellesley, but is still to be met with in Perak. (T>anslator).